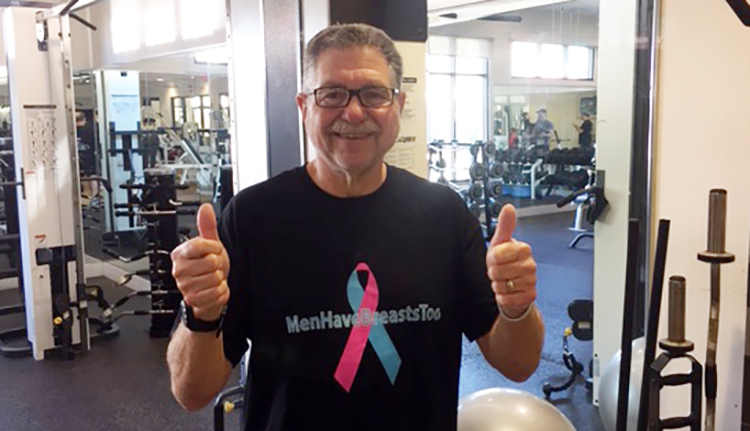 I am a retired pharmacist living the dream on the Northeast coast of Florida.  For a few months prior to December 2018 I noticed that my left breast nipple was retracting. I was under the assumption it was healing because I had a nasty fall earlier from dehydration when I had influenza B and remembered there were times that my left chest area bumped into a car door accidentally.  I really didn’t pay it much attention.

Around late that month I googled dimpling of the breast and saw it was a symptom of breast cancer which then led me to google male breast cancer and then reality set in. I told my wife to look at my left chest and she immediately said we are going to get you a mammogram at the Hill Breast Center in Jacksonville Florida where they have a state-of-the-art machine and a radiologist there to get immediate results. Yikes, this is getting serious now! When I went for my mammogram the nurse called my last name and when she saw me, she said no i called for your wife. I showed her my wristband and she said Oh, we will get you a private room. That was my initiation into the world of male breast cancer.

On January 8, 2019 a mammogram was taken “ouch” then a sonogram then two days later a core needle biopsy for what they said was a suspicious mass.  My GP called me after the biopsy and told me to make an appointment with a oncology surgeon just in case. On Jan 14 I was told I have invasive ductal carcinoma of the left breast.  I felt like someone just hit me over the head with a sledgehammer. I was in a daze not exactly knowing what to make of this. I pictured myself laying in a bed with no energy and a bald head.

On January 21 I met my surgeon who told me the tumor looked “wimpy” and I told her that wimpy is good.  She recommended a genetic test for the BRCA 1/2 gene mutation and it came back negative, so I opted for just the left breast mastectomy. Surgery was set for February 8th. I decided to tell my friends and family about this and not to hide it.

Soon after diagnosis I found the Male Breast Cancer Coalition (MBCC) and  Peggy Miller called me and welcomed me into my new family and sent her love and support not to mention a couple of new recovery shirts for post op.  After I told my friends the diagnosis, I couldn’t believe all the support, prayers and well wishes I received also from people I didn’t even know that well who are now very good friends of mine.

Surgery went well and 2 lymph nodes were taken. The tumors were tested using MammaPrint and Oncotype DX and both scores were very low indicating no chemo or radiation needed. I was placed on Tamoxifen for 5 to 10 years. I kept faith all the time that things would work out and tried my best to keep a positive attitude, but anyone who has been through this will tell you it is a scary proposition. I was lucky to have caught this in the early stage 1a, but some are not so lucky.

I thank God for sparing me chemo and radiation and leading me to the MBCC who helped me navigate through this in many ways too numerous to mention. My goal going forward is to be an advocate for the MBCC and to help any men out there with this disease to get through it as best as possible. 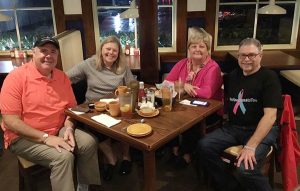