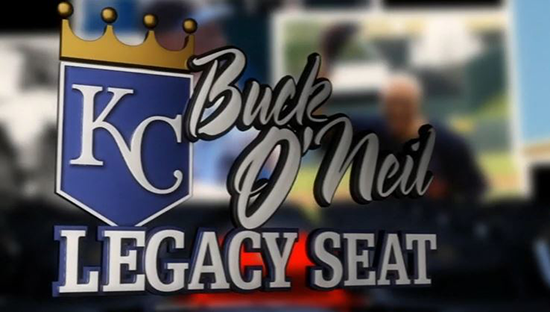 On October 28, 2014 Bret Miller was invited by the Kansas City Royals  to sit in the prestigious “BUCK O’NEIL LEGACY SEAT.” Bret and his Mom Peggy attended Game 6 of the 2014 World Series.
( Yes The ROYALS did Win 10-0 ! ). They met with many members of the Royals and MLB.com , They had spectacular night of pampering, Baseball, and Celebrity Treatment. A Magical and exciting night being recognized for his work in bringing awareness to the world that Men too Can get Breast Cancer. Thank  You again, Kansas City Royals for your recognition, We are Humbled.
Below is some video of our night.

Buck O’Neil had an enormous impact on the world of baseball and the lives of the everyday people he touched. Buck spent many days and nights supporting the Royals from the same seat behind home plate at Kauffman Stadium, both as a scout and a fan. To honor Buck, the Buck O’Neil Legacy Seat Program fills “Buck’s Seat” for every home game with a member of the community who, on a large or small scale, embodies an aspect of Buck’s spirit.