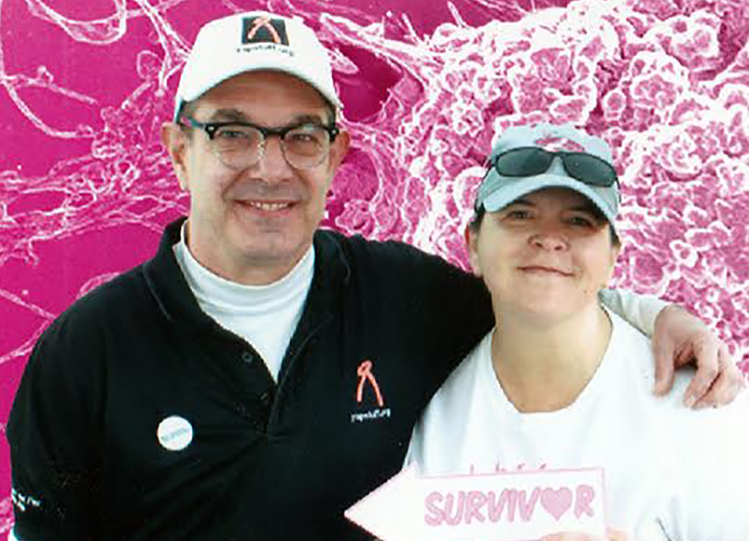 Ten years ago while in my mid 40s I gave up my dream of becoming a professional golfer. Instead of being fitted for the green jacket, I worked as a designer for a commercial printer.  The most awesome part about my job was the owner was a golfer, and invited me to join the AGA (Advertising Golfers Association). Membership gave me entrance into the Oregon Golf Association, and allowed me to post a handicap with the USGA.  We had competitive golf outings each month from March to October, playing area country clubs at a fraction of membership costs. I loved it.

As I read books and magazines about golf, I learned one in four golfers in the Pacific NW get some form of skin cancer.  Since my mother died of ovarian cancer, I’m vigilant about seeing a dermatologist. In 2005 when I had a little pimple on my nose that wasn’t going away, it seemed like a good idea to be checked.

The pimple turned out to be basal cell carcinoma, a common non-malignant skin disorder. When the doctor asked me if I had any other skin spots or growths, I suggested she look at my chest. I’d had a dry spot on my right side for about a year.

There was no internal lump, rather a white cellular growth on my right nipple. A biopsy was taken and another appointment was scheduled for the following week. The biopsy was inclusive, and there were two more biopsies performed before I was referred to the Legacy Good Samaritan Breast Cancer clinic.

Let’s get back to golf for a second. This all happened during the summer months, the best golfing in the Northwest. Each biopsy required stitches on my chest, but I didn’t stop golfing. I even shot my best round ever during this time — breaking 80!  Something I’ve not done since.

Okay, now I’m going to the breast cancer clinic to meet with a surgical oncologist. I walked into the waiting room, quietly went to the window to check in, and found a place to sit among the women waiting to be seen.  There were a couple of men sitting there too, but mostly to support their wives or mothers.  Then it happened, they called my name. This was the first time I was embarrassed about seeking treatment for breast cancer, a woman’s disease.

Once in the room, I had the usual blood pressure, temp and weight tests. Then the doctor came in. She was an upbeat person, positive in every way. What was previously a scary thought became relief because I was in the comfort of a caring professional.

Even though the dermatologist took most of my nipple, the breast surgical oncologist wanted one more biopsy before anything else was going to happen. I agreed.

The summer had passed and it became autumn. The doc was still not getting good results, so a mastectomy was scheduled for after the new year.

We were escorted past double doors into a curtained partition. I think Julie was standing, and I was sitting in the single chair in the area. Next a nurse practitioner entered and told us she’d be guiding us through the surgery process. “We will want you to put on the surgical gown and lay on this table, we can bring you hot packs, and blankets to make you comfortable,” the nurse said to my wife.  “Now Julie, do you know why you’re here today?”  Julie and I looked at each other stunned. Julie’s reply, and I will never forget it was, “I’m here to support my husband.“

It was at that moment I went from being embarrassed for having breast cancer, to needing to raise male breast cancer awareness.  Here is a caring professional, saving lives everyday, who mistakenly jumped to conclusions.

The gender disparity, the lack of education, the frustration of trying to start the lawn mower after a mastectomy were all things I faced. This is a conversation never spoken.  I won’t say men get breast cancer too. I say, “People get breast cancer.” Let’s educate.

A mastectomy in Oregon, USA is a day surgery with instructions about how to deal with the drain tubes and how to administer medication. There is no way I could have dealt with this without Julie’s help. For the first time in our 10 years together our relationship was challenged because it was the first time I had to rely on her to care for me.

The surgery went well and each day after, I began feeling better. Then came the next call. The results from the surgery had come back.  The diagnosis was invasive breast cancer and I would be scheduled for another surgery to make sure there were no metastases. It would require lymph node removal and dissection. This is when I realized, this breast cancer thing is something to take serious. The next surgery was very painful, and had I been a woman, would have been performed automatically during the mastectomy.

This procedure floored me for another couple of weeks. While I had health insurance with my employer, there was no sick leave or short term disability offered, so the extended recovery time not only hurt me physically it cost us income. And the crazy thing, while we had insurance, it took 18 months of payments to pay off the surgeries.

The follow up appointments were weekly at first, then monthly and finally I was referred to my post surgical oncologist who would manage my treatment for the next five years.  He was a kind and gentle man. Every time we met he told me how healthy I looked, how there was very little data on male breast cancer, and typical post breast cancer treatment is based on premenopausal or postmenopausal conditions. As I didn’t fit in either category, a five-year regimen of Tamoxifen was prescribed.

I learned Tamoxifen tends to push premenopausal women in to menopause, and in my case, I experienced some of the same side effects. The night sweats, hot flashes, fatigue, emotional highs and lows took some getting used to, but I learned to cope.

My professional career suffered, as I didn’t really talk about the side effects, not wanting to disclose my run with cancer. Employers don’t want to hear cancer, so I kept my diagnosis to myself.

After five years, the oncologist released me from treatment.  Now what was I supposed to do?  I’d had three jobs over the five years, went more than two years without employee health coverage and the had to pay my own doctors’ bills. Thankfully my oncologist made sure I received Tamoxifen at no cost.

With combination of an industry shift and the lack of reliable employment, I decided to abandon my career in printing and had to find another line of work that would make me happy and pay the bills. I took a job as a bartender at an area country club and once again had access to golf.  I got to hang out and talk golf with members and guests while making almost as much as I made in the highly stressful print industry.

It was last year, just about this time, when my wife Julie and I took the fourteen hour flight from San Francisco to Sydney, Australia, as guests of a local charity educating people about breast cancer.

I’d met Roz Hill, founder of YapStuff.org (Young Adults Program), on the internet some eight years earlier. I’d just received a breast cancer diagnosis and I did what any confused male might do, I Googled male breast cancer, YAP came up number one. I sent an email to the site, explaining what I was going through, how their site came up first and there was a real need for more information concerning men and breast cancer.

What I didn’t know at the time was Roz had just launched the site a few months earlier and it was being hosted by a partnership with Google Australia.

I would often email Roz and share with her my frustrations with the gender divide when it comes to breast cancer. It didn’t matter that I was a top fundraiser for our local Susan G. Komen affiliate, or that the CEO was a man, I couldn’t seem to convince them of the importance of making men equally aware of the risks of breast cancer. Probably was a corporate thing.

I reached out to other online organizations asking for support to help raise male breast cancer awareness, and none were interested in hearing from a man in his forties dealing with breast cancer… except Roz.

So here I was, after all these years, with an opportunity to meet the person who supported me in my endeavor to educate men of their risks.

Roz was no stranger to cancer. At the time, she was a two-time breast cancer survivor and had just lost her son Peter to a brain tumor a year before. We had many long conversations about cancer, losing loved ones along the way.

Now, on a spring October morning, Roz greets us at the airport. She was a bit frail and walked with a cane. “I use this because my hip is a bit wonky,” she told me. I knew she was sick again. The cancer was back and now in her bones. Her plans of caravanning me all over the country to speak about breast cancer, was now confined to New South Wales.  I didn’t mind. This was my chance to meet and learn from Roz Hill a world changer.

Julie could only stay two weeks because of job commitments while I stayed on until the end of the month. During that time, I visited the MacCarthur Cancer Centre, and met Mr. Ken Stonestreet, a breast cancer patient who I would later find out was a local hero and star rugby player in his younger years.

I got to spend time with the two young people who lent their voices to the new Breast and Pec self examination app from yapstuff.org, I met with a federal member of Parliament and made some wonderful friends while there.

You might be asking yourself, why is this guy talking about a trip and not about his experience with breast cancer? I made a couple of promises to Roz.  First when I got back home I would go and get screened again. Second I would keep the message alive, continue trying to educate men about breast cancer, and work to convince the medical community to consider taking gender out of the conversation by saying “people get breast cancer.”

Sadly, Roz passed away just a few weeks after I returned home. She lived right up to the end, even posting a selfie with her hospice nurse just the day before she died. Mr. Stonestreet too passed of complications from breast cancer.

Five years before I found out about my breast cancer, my mother lost a six-year battle with ovarian cancer. Genetic testing wasn’t available in those days, and why would I be concerned, I don’t have ovaries. What I didn’t know, and no one told me, was there is a connection between ovarian and breast cancer and both can be hereditary. I was the first male patient my oncologist had referred for genetic testing. There was a question as to whether my insurance company would pay for this expensive test. It was approved and the results showed I carry the BRCA 2 genetic mutation, increasing my risks of breast cancer.

While this story may take a long time to read, I’m doing as promised, keeping the message alive. Breast cancer knows no gender and I will be celebrating 10 years cancer free this coming January.