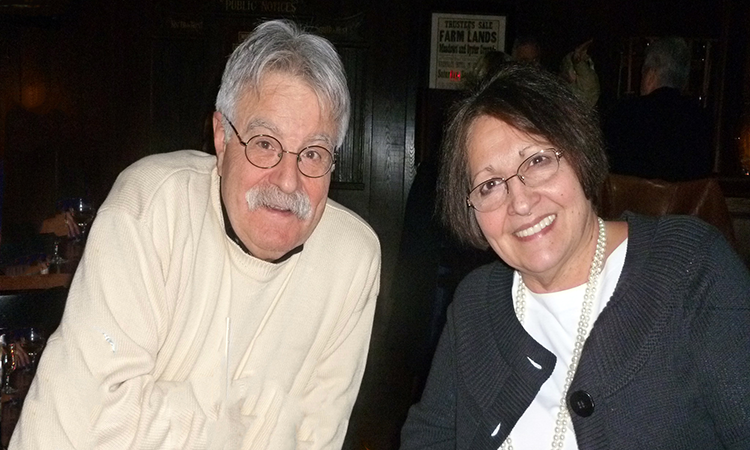 You can be here one minute and gone the next. Enjoy life while you’re here.  That’s what my daughter Jaime did before she died of lung cancer at 38 years old last year.  The doctors had given her six months to live, but for Jaime love and laughter were her best weapons against cancer. You would never know she was so sick. She didn’t want any pity, never, during her four-year fight.

Nothing prepared me for losing my daughter.  I felt helpless, but she taught me a lot about life and what’s important. No regrets. Live in the moment.

Years ago when I was a patient navigator with the American Cancer Society, people would tell me I made them feel better. Being a patient navigator helped me too. I got to talk about things and I got pleasure knowing I was helping others.  I also couldn’t feel sorry for myself.

The cyst on my back was really annoying me.  Whenever I sat down, it would rub against the chair, so in 2005 I had it removed.  We were standing in front of a mirror when my wife was changing the bandages and said, “You know the nipple on your left breast is leaning to the right.” I remember thinking oh I’ll just put some duct tape on it!

Before the surgeon did my biopsy he explained if I woke up after surgery with big bandages, then I’d know I had breast cancer.  My left breast was removed at Staten Island University Hospital in 2005.

After I learned I was positive for the two mutations of the BRCA2 gene, my son and daughter were tested. My son was negative, but my daughter also tested positive for BRCA2. She was preparing for prophylactic surgeries, then she got large cell lung cancer.  I still haven’t been able too get my brothers or cousins to do testing. They just don’t want to know.

About a year after my mastectomy, I had my right breast removed too. I needed some time to process the first surgery, but after learning about the BRCA2, I knew my chances were so high for developing more breast cancer.  I made the decision not to wait and felt lopsided anyway.  I didn’t need my breasts for anything, plus you really can’t see any scars through all my chest hair.

At 65 years old I realized I never had a stress test and decided to go to my brother-in-law’s cardiologist in 2012. I had no symptoms of any heart issues, but wanted to get checked out.  The doctor examined me, didn’t like the way my heart sounded and wanted an echocardiogram done immediately.  The technician immediately called the doctor in and said, “You have to take a look at this.” The doctor told me I couldn’t survive a stress test and said I was very close to having a massive heart attack. The Adriamycin chemo had damaged my heart, but I had no idea how badly.  A week later I was at New York Presbyterian Hospital having open heart surgery. I left with a new aorta, new aortic valve, and a defibrillator inside of me.

I’m 67 now and on June 9 of this year I had a mini stroke. I was immediately worried there was cancer in my brain, that’s what happens when you’re living with cancer.  Thankfully the PET scan didn’t light up.

As a volunteer with the American Cancer Society I was able to get the message across that men get breast cancer too. It’s such an important program. We’re survivors. You’re not the only one going through cancer, lean on us, ask us questions. We all learned there’s life after cancer and you’ll find it.

Now I’m trying to find my way back into the world again.  My wife and I are completely wrapped up in our
7-year-old granddaughter. Together with our son-in-law we created The Jaime’s LILAC Foundation as a way to give back and honor the legacy Jaime left behind: Laughter, Inspiration, and Love Against Cancer.  Our primary goal is to raise funds and provide care packages to patients who are fighting cancer. We also want to provide funding to hospitals leading the way in cancer research.

With everything that’s been going on, it’s too difficult to be a patient navigator.  Maybe in another year or so and I’ll be ready to go back.  In the meantime, I’m enjoying as much time as I can with my family and seeing my oncologist once a year for blood tests to check my markers for cancer.