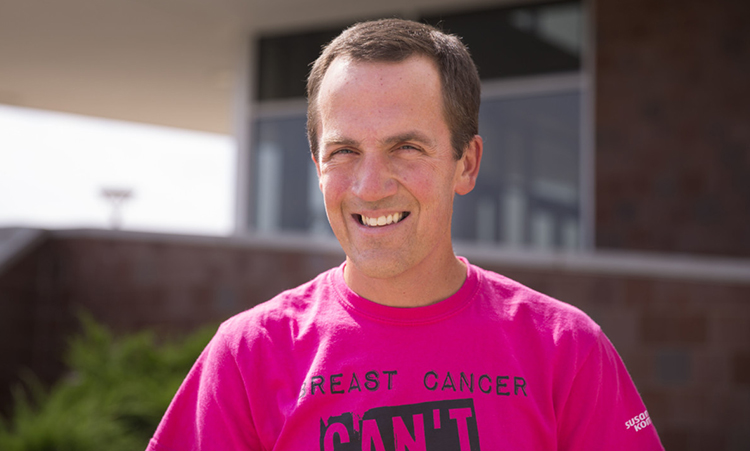 Tony Pottorff
On December 18, 2020 we lost Tony.  We honor his memory every day.

I was diagnosed with Stage IV breast cancer on June 13, 2017, aged 45.  It would be a week from that point before I found out it was HER2 positive and it was not an inherited disease. These specifics regarding my diagnosis were very important, as the initial educated guess by my breast oncologist was that I had triple negative breast cancer that was inherited. I was told that triple negative breast cancer had fewer treatment options and that, if my cancer was inherited, there would be a 50% chance that both of my daughters (ages 12 and 16 at the time) could carry the gene and therefore have a chance of developing breast cancer in their lifetimes.  What compounded this issue so much is that I am adopted and have no documented medical information about my biological parents. I was relieved to find out that I had HER2 positive breast cancer and that it was not inherited; funny how a cancer diagnosis changes your perspective and the fact that what the world may feel is devastating actually has a bit of a “silver lining” to it.

I first noticed a lump under my left nipple at some point in 2015. I only noticed it when working or being active; and still then not very often.  It seemed unusual but I figured it was scar tissue, a calcium buildup – anything other than cancer. My wife noticed the lump one day and suggested I have it checked out. My family doctor took a look at it and claimed it was “probably nothing” and I went for an ultrasound expecting an uneventful experience. Within minutes the doctor called me in to show me the images of white calcification in my left breast and adjacent lymph nodes. He then stated he was “99% sure it was cancer”. That’s when my world was turned upside down.

Within a week of this first encounter I had breast biopsy and went through genetic counseling and testing. This all occurred while my oldest daughter was on a school trip with her Spanish class to Costa Rica. As a result, we kept the details of my diagnosis under wraps as best as we could from her. Sharing my diagnosis during our hour-long ride home was one of the most gut-wrenching experiences I have ever had. We shared the following grim news with her: I have breast cancer, it’s metastasized to my left hip, lungs, and numerous lymph nodes. It was shortly after that we began to share the diagnosis with our family, friends, colleagues, and church family.

My wife and I made a choice to be transparent about my diagnosis and the various stepping-stones along my journey almost immediately after my diagnosis. That decision changed the trajectory of our experience. Our initial objective was to personalize the ups and downs all cancer survivors experience as well as to advocate for more breast self-awareness for both women and men. It has done that and so much more. The amount of support we have received – prayers, financial donations, help with meals and home improvements, and even free braces from a local dentist – has been overwhelming, undeserved, and life-sustaining.

From June-December 2017 my treatment plan consisted solely of chemo medications (Herceptin, Perjeta) in the form of infusions received every three weeks, and the hormone blocker Tamoxifen, as a daily pill. Since January 2018, the daily pill has been dropped from my regimen. I still receive Herceptin and Perjeta, and Taxol has been added as part of my every three weeks treatment. Just recently, I began experiencing pain in my right hip. At that time we found out that I also had cancer in my right hip.  Thankfully this was not new tumor, but part of my original diagnosis in June 2017. My wife and I are still baffled by how we missed that information. As a result of this “new” discovery and its accompanying pain, I received ten treatment of radiation, which I finished in April 2018. The pain seems to have subsided and it is straight back to my chemo regimen of in two weeks.

Finally, a critical component of my personal coping is that I teach high school. I am now in my 18th year and still work full-time. Being around such “young” energy is life-affirming and I am amazed by how many times daily I “forget” that I have cancer. My point is that the health and perspective of the brain is one of the most important parts of “thriving” with cancer.  I am truly blessed that God placed me in the world of teaching; my cancer journey has been immeasurably more manageable as a result.