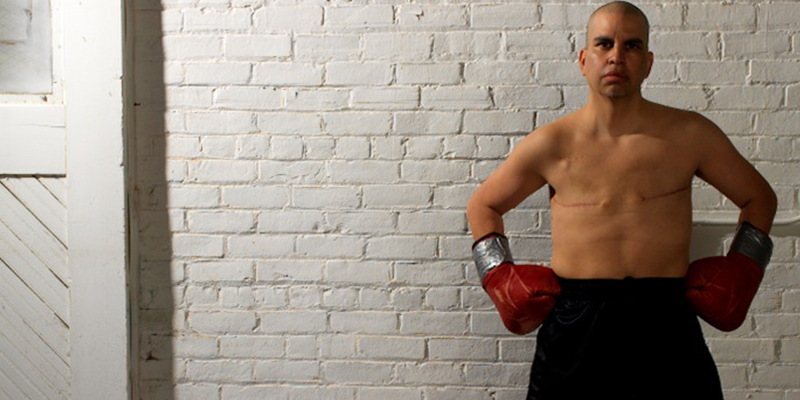 It all started in April 2012, when, after taking a shower, I felt a small lump in my left pectoral area. I was worried and concerned, so I immediately scheduled an appointment with my primary care doctor. After checking out the lump, he then told me that I needed to make an appointment at the Mary Jo Cropper Institute in Cincinnati.

At the institute, as I waited to see the doctor, the receptionist gave me several forms to fill out. But after just viewing the questions,

I realized that the only one I could answer was my name. All of the questions were targeted to women: When was your last menstrual cycle? Who is your gynecologist? When was your last mammogram? And so on. I just sat there in disbelief that there wasn’t one question pertaining to me. Even the sign outside the office read “Wellness Center for Women.” Really? What about men? Shouldn’t it have read “Wellness Center for Men and Women”?

So, after I filled in my name and gave the forms back to the receptionist, she looked at me and said that I didn’t finish filling out the forms. She was correct. I forgot to date the forms. By the time the nurse called me in, I was still shaking my head in disbelief about how everything at the institute is targeted toward women.
Before I could even meet with the doctor, I had to have a mammogram and an ultrasound. One look at the mammogram machine and I was saying to myself, “There is no way I am sticking my chest in that crazy contraption.” Well, you know what? I did, and it was not fun. It was kind of torturous—all that smashing and squashing every which way. After the mammogram came the ultrasound, which was okay, especially compared to the mammogram. Next stop was finally meeting with the doctor. He came in, looked at the results of both the mammogram and ultrasound, felt my lump, and stated that a biopsy was needed. Back to square one as I waited another week for an appointment.

Mid-April 2012. Biopsy time. The biopsy took 30 minutes. Oh, wait. I had to fill out those crazy forms again. I filled in my name and date only. After the biopsy, the doctor told me I had to wait another week or so for the results. In this day of real-time information, you’d think the doctors could get the results the same day.

End of April 2012. Back to the doctor for the biopsy results. Benign. I was told that the lump should disappear within six months; otherwise, I would need to come back.

October 2012.
The lump did not disappear. It grew to the size of a golf ball, and it hurt like hell when I tried to sleep on my chest. Plus, over the summer, I noticed that I gained a lot weight and there were some subtle changes to my chest area. In addition, I was tired a lot more. So, a little voice in my head told me to get to the doctor ASAP. I went back to the Wellness Center for Women and filled out those forms again, with my name and date only. They never changed the forms to accommodate male patients. Go figure.

The doctor took one look at the lump and told me to schedule an appointment and have the lump removed immediately. In the healthcare world, the definition of immediately is more like 30 days later, which meant November. I had to wait that long?

November 2012. As I was being prepped for surgery, I wasn’t thinking the lump was cancerous. I thought maybe it was just a fatty deposit. The surgery wasn’t bad, and my doctor told me I had to wait a week for the results.

A week went by and I returned to the Wellness Center for Women again, filled out the forms again, and waited to see the doctor again. He came in, the nurses came in, and I suddenly had a strange, uneasy feeling. As the words came out of his mouth that the lump was cancerous, I could not believe it. My mind and my thoughts were in a fog. It wasn’t just cancer, but male breast cancer.

After he said those words, it didn’t matter what else he told me. I was frozen in total disbelief. When the initial shock wore off, which seemed like an eternity, I was able to ask the doctor questions about the next steps. His reply was a double mastectomy. Wow! After this step, the doctor told me that he would know more about how to treat the cancer.

As I walked back to my car, I called my two best friends to tell them the results. I broke down. I am glad I broke down with them before I called my parents. I couldn’t call my mom, because the news was just so devastating, so I called my dad to tell him.

November 27, 2012. I had surgery to remove both sides of my chest. It had to be done, and I was okay with it. I just wanted to get it over with, but that wasn’t the end of it. After the double mastectomy, I was told that I had to see Dr. Jose Barreau for the next steps. Again, I had to wait. The waiting part really sucks in all of this.

In mid-December, I met with Dr. Barreau in regard to my treatment. Treatment? I thought the surgery would be the last step, but no. God had other plans for me. I was going to need chemo. OMG, chemo? My only thought when he told me about the chemo was that I was going to lose my hair. That was my only concern. My hair. Nothing else was on my mind. He told me that I would lose my hair and my goatee. That was it. I couldn’t take any more bad news. Ugh. But you know what? He was wrong! I lost my body hair, but I kept my eyebrows and eyelashes. Ha! Thank God!

Early January 2013. Chemo begins. The first treatment wasn’t bad, I thought to myself. I was pumped with awesome anti-nausea meds. But then, after awhile, the poison entered my body. Three hours later, I was back home. Felt great. The next day, I received my booster shot of white blood cells. Again, I felt great—until it hit me at 1:43 Saturday morning. Oh, the nausea. OMG! I took the anti-nausea meds that they gave me, and guess what? Did they work? Nope. The pills made it worse.

Then the bone pain started in, and that’s when I was so glad I had my Vicodin. I downed a few of those, and soon I was in la-la land. The hallucinations weren’t fun, but the pain was gone. This went on for one week before I began to feel normal again. I started to eat again and told myself that this chemo stuff is easy. Boy, was I wrong!

Before my next treatment, I was back in the hospital to have a port installed in my chest to make it easier to receive chemo treatments and to draw blood. Great idea! For the rest of my treatments, the pain eventually grew worse, but I knew the end was in sight. It had to be. I knew I had to fight this battle with strength, positivity, faith, and humor. Plus, I had involved my friends’ at this point, so I asked all of them on Facebook to send me crazy hats and pictures of anything that was pink, to support breast cancer awareness. Well, I received countless hats and pictures, which raised my spirits.

During my experience with all of this, it was after my second treatment while I was resting on my couch that I heard a voice in my head telling me that I needed to start a male breast cancer foundation. A wave a good feeling swept over my body, and it wasn’t just the anti-nausea meds or Vicodin; it was as though I realized that forming the foundation would be my calling, my destiny.

I contacted one of my longtime friends, Gerry Pasqualetti, to ask him if he would help in my cancer foundation by designing an official logo and website. Of course, he said yes. And so “Protect The Pecs” was born. He created an amazing logo.

Instead of lying face down in the fight against cancer, come out swinging and beat it down! Battle it with all of your strength, positivity, faith, and humor! You will win!