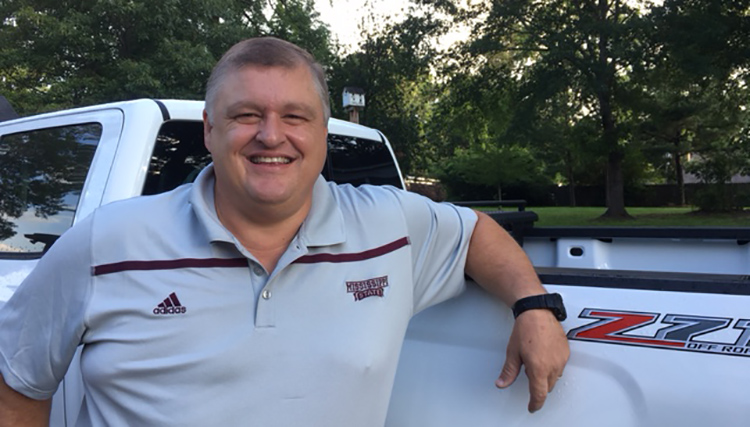 There is Nothing Feminine About Me

I am an independent insurance agent, living in Winona, MS.

Three years later, in February 2015 at the age of 52, I was diagnosed with breast cancer. I finally went to the doctor after being hit in the chest by a baseball zipped across a desk by a co-worker. I was “motivating” him, and as a former college baseball player, he had several baseballs on his desk. The ball hit me directly on the lump and the skin split open.

Since I had three years to think about breast cancer after first discovering the knot in my chest, accepting the fact was a gradual process. I should have been more conscious of male breast cancer than other men. My sister’s brother-in-law, who lived in Maryland, had breast cancer. My mother talked about it and kept me informed during his illness. He had a mastectomy, but did not get chemotherapy. His cancer came back and he did not survive. I had already discovered the knot in my chest during the final two years of his life and I still did not want to believe I could have breast cancer. I eventually began thinking I may actually have breast cancer, and once I was diagnosed I was not surprised. When the doctor called and gave me the diagnosis, the first thing I asked was, what do we do now. He said we will cut it out and I said let’s do it.

I had a mastectomy on the right side. The cancer did not spread to any of my lymph nodes. Following surgery, I was given four rounds of chemotherapy. I handled the process pretty easily. The only people I told about being diagnosed were my wife and children and the four employees who work directly with me. I waited until after my surgery and the determination that the cancer was contained before telling others. Chemotherapy was not fun, but I did not let it change my lifestyle. I only missed a few days of work and continued my normal routines. I did have less stamina and did not enjoy that part of the process. I did not require any radiation treatments and after chemotherapy, I was prescribed Tamoxifen.

Prior to my surgery I had BRCA genetic testing, and tested negative.

My family handled the diagnosis very well. There was the normal concern, but we are not the type of people who overreact. I assured them it was something that could be taken care of and not to worry until we were told we needed to worry. My friends and colleagues were very supportive, but knew that I did not want any sort of special treatment.

It has been two years since my surgery and having breast cancer is something I barely think about on a personal basis. The major impact it has made in my life has been a greater awareness of others who have had or are battling breast cancer. I’m thankful that I am able to talk to these people and give them some comfort as they battle through it and give them some advice regarding things to expect and how to make things a little easier. Just as soon as I had surgery, two women who I know were diagnosed with breast cancer. They credit me with helping them make it through with a little more reassurance that things would be better. It was.

The other impact on my life was the realization of what is really important to me. The week I was diagnosed I had a phone call from one of my customers who had been diagnosed with another form of cancer. I was still processing the thought of having cancer and I asked him if his attitude had changed. He laughed and said absolutely. We both talked about how after being diagnosed with cancer the little or unimportant things that used to worry us or get us upset no longer did.

Fortunately, I have a great support system in that I was able to know my family, friends, and co-workers were all there for me and genuinely cared about me. I did not want to be treated differently and they made sure I wasn’t. I never joined any support groups or anything like that.

I am the product of a small southern town in Mississippi. I’ve always been one of those rough and tumble guys and continue to be that way. I grew up farming and have always been an outdoorsman. I was a high school football player and was always known as being one of the most physical players on the field. After college I moved to Dallas, Texas, for work. I discovered the sport of Rugby while in Dallas and was fortunate to play for one of the best teams in the nation for four years. I continued my Rugby career in Memphis where I played for three more years before I moved back to my hometown of Winona, MS. For the next 11 years I continued to play Rugby for Jackson, MS, which was nearly 100 miles away. Finally, at the age of 40, I decided to retire from the game. I played one of the toughest positions in the sport and was always one of the strongest players on the field. I was an interesting sight calling on large customers in a business suit with a black eye or a big scab on the side of my face. After retiring from contact sports, I spend a lot of time working on my farm and hunting camp. I have a group of friends who enjoy getting away from civilization and having a good time in the woods.

The point I want to make is that there is nothing feminine about me. There is nothing about me that would make someone think, there is a man who would be a good candidate for a “woman’s” disease. In fact, one of my employees who had worked with for 22 years said she thought I was the perfect man to get breast cancer. If I can get it, no other man should be embarrassed to have breast cancer. I tell people in my talks that I am the last man you would ever think would get breast cancer, but I still came down with it. If I can get it, every other man out there can get it. Being big, strong and tough does not stop breast cancer. The embarrassment is not doing anything about it and waiting until it is too late to treat. As husbands, fathers, sons, and brothers, our families depend on us and looking after our health is a responsibility we should all take seriously.

Lastly, the most important thing to know about me is that I have been married to my wife Debbie for 30 years. I have two grown daughters. Ashlyn is married to Matt Matthews, and in February of 2017, two years after I was diagnosed, they had our first grandson, Owen Matthews. My younger daughter Jenni, is married to Sam Hand. They were married in July 2016, one year after I completed chemotherapy. I was very fortunate to have had such a good outcome from breast cancer. After being diagnosed and treated, I had the pleasure of walking my second daughter down the aisle and being there for the birth of the first of what I hope will be many grandchildren.

I have been truly blessed and if I can get the message through to just one hard-headed man to get himself checked out, I will have been successful.