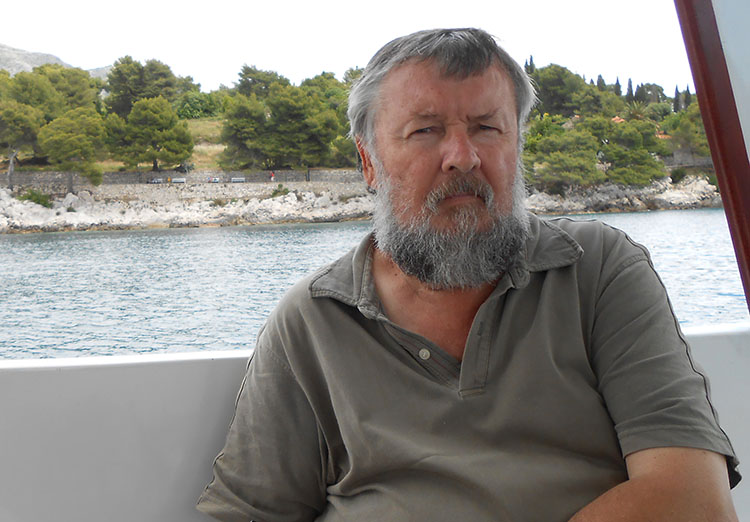 I’m a breast cancer survivor of 25 years after being diagnosed about two months before my 37th birthday.  My mother died of this disease at the age of 42 (nine months after her diagnosis and double mastectomy), but like other men, I had no idea men could get breast cancer too!

It was Father’s Day in Australia (first Sunday in September) – I had been admitted into hospital on Friday, biopsy on Saturday, discharged on Father’s Day, phone call on Monday to be at the specialist’s rooms, at which time I rang my wife to come with me.  I remember seeing a book open on the specialist’s desk with diagrams of breast cancer and him telling me about my diagnosis.  I was told to go home, pack my bag and was in hospital that evening in preparation for a left-sided mastectomy the next day.  I don’t actually remember my response at that point, but I clearly remember waking up at 2am in my hospital bed in a cold sweat – that is when the shock of it all set in.

How did I find the lump in my chest?  It was my wife Mary-Ann who found the lump and got me into see our GP.  Little did I know that when she made the appointment she told the receptionist to tell our doctor my mother had died of breast cancer.  Our doctor was very good – at that time the surgeon was part of the medical practice our family attended, so the process of getting me to have the biopsy and admission into hospital all ran very smoothly, so smoothly in fact that I had little time to dwell on the whole issue.  I can sort of recall the surgeon saying that men get cysts all the time – not sure now in hindsight whether that is actually what he said or whether I was hoping that was the case. We are going back 25 years ago when there was not the knowledge there is today – diagnosis made, options not given, no testing to see what type of breast cancer – just straight into surgery.  It came to light a bit later that no histopathology was performed on the lump removed from my breast – just that it was very calcified.

Back when I had the surgery it was the norm to stay in hospital for a couple of weeks, not like now – keeping the stay in hospital minimal as home environment is so much more conducive to recovery both physically and emotionally.  I was discharged with no referrals for physiotherapy or psychological assistance – left with literally nothing – I often wonder if they just didn’t know what to do with me being a male with breast cancer.  My wife was working in health care at the time and arranged for me to have hydrotherapy, which helped with my left arm movement and psychological well-being.

This was a very stressful time for our family.  Being self-employed, I relied upon my income protection benefit to assist us financially.  This was not to be the case because the insurance company was going through the hoop (directors were farming money through different banks), so there was no money coming through from this policy.  Mary-Ann, through determination and perseverance, managed to get some of my “Sickness and Accident” payout.  Not only lost income protection money, but years of superannuation payments.   It was whilst I was still in hospital that Mary-Ann had a collector at our door for money we owed to a building supplier.  To this day, we can never be thankful enough to a good friend who helped us financially during our difficult time as he had to get other trades in to finish off a couple of my outstanding jobs.

I can understand why couples breakup in these situations – too angry and confused to talk about feelings etc.  This is where good friends are invaluable. I would offload to a good mate, he would then relay my feelings and such to Mary-Ann who could then understand why I was so intolerable.  Lack of communication and being too angry to talk about feelings to those closest to you is so common.  I understand that now, but definitely not at that time.  Men getting breast cancer – that is just too weird.  That’s how I felt back then.

My pasty making happened because of a morning when both Mary-Ann and I broke down.  It was before she was heading off to work and I was so angry and depressed that I just cried and cried.  She cried as well. We were both a blubbering mess in the bedroom.  Mary-Ann told me to stop all the misery and to make myself useful and cook tea.  So I did – I became the pasty king!  I made them in all shapes and sizes until one day everyone said, “No more!”

Returning to work was the best therapy – back out there with mates from the various building trades.  Many of my customers held off having renovations and other work done until I was ready.  To this day I am still very thankful to them.  There were some people though, I guess because they didn’t know what to say, who never got back in contact with me.  This also applied to friends.

There was chemo and Tamoxifen for five years. Regular mammograms, blood tests and specialist appointments still continue, especially in light of being diagnosed with non-Hodgkin lymphoma four years ago this coming April.   Relief was so immense when this was found not to be a secondary cancer.  A stand alone cancer, which was treated with surgery and regular check-ups.  I cannot believe the difference in processes and communication 20 years on after having had breast cancer.

Genetic testing was first discussed at an appointment with the South Australian Clinical Genetics Service in 1996.  I was advised in September 2012 that it was likely I may have an inherited tendency to develop breast cancer, but when tested for the BRCA1 and BRCA2 genes in 2013 the laboratory did not find the genetic explanation of my personal and family history of breast cancer.  I was advised “the test result is a common and frustrating finding” and “it highlights that there is much about inherited cancer that is not known”.  I was also advised the test result had not excluded the diagnosis of familial cancer and “that it is clear that there is an inherited predisposition to develop breast cancer” and that I would be contacted when further information comes to light.

Dragon boating has taken me to South Africa, where my breast cancer team won two silver medals.  It was on our return from South Africa I became no longer interested in paddling, so was approached to train as a sweep (person who steers the boat). To this day this is my role in our club.  A heart condition eventually prevented me from paddling which is why I continue to be a sweep for our club.  In 2005 “Adelaide Survivors Abreast” was formed and I am now President and Coach of the club.  We participate in the Masters Games in South Australia and other towns/cities in Australia.  We were winners of a bronze medal at the Dragons Abreast Australia event in Sydney in October 2015 as well as winning medals in the Australian Masters in the same year held in Adelaide.

Our club likes competing in overseas events when possible, having competed in the Windy Wellington (New Zealand) Dragon Boat festival in 2011, paddled 33ks in the Venice Vogalonga , and in 2014 completed a 50k paddle down the Ord River in the Kimberley region of far north Western Australia.  I am at the helm of these events and thoroughly enjoy all the interaction involved.

Adelaide Survivors Abreast promotes “men get breast cancer too” and I am proud to still be involved with this club.  Dragon boat paddling is something Mary-Ann and I do together three times a week, as well as on race days and in other events.  It has consolidated our relationship, especially in light of her being diagnosed with breast cancer in January 2015 for which she had a lumpectomy.  Genetic testing is on the list for 2016 for her.

The fact that both Mary-Ann and I have had breast cancer is of concern to me because of our 2 daughters.  They are now in the medical system having both linked in with breast specialists – Vanessa receiving medical support in Adelaide and Louise in Canberra.  Both will receive annual MRIs until the age of 40, after which time they will be eligible to undergo mammograms through the public health system and other tests that may be required, including genetic testing.

Our message that “men get breast cancer too” is something that both Mary-Ann and I, and our club are passionate about.  It still amazes me that the majority of men I speak to still do not realise this can happen.  The message is starting to get out there in the media now, but it has been a long time coming.  In the past I have done radio and television interviews, but nothing has eventuated.  This is why our club has been chipping away at getting this message out there whenever we can.  Both Mary-Ann and I speak at community groups when invited, and the message is always the same “men, check your breasts”; to the women in the groups “get the men in your life to check their breasts”.

Education is an ongoing element of changing people’s’ attitudes – so it’s up to all of us to do just that – share the fact that “men get breast cancer too”.