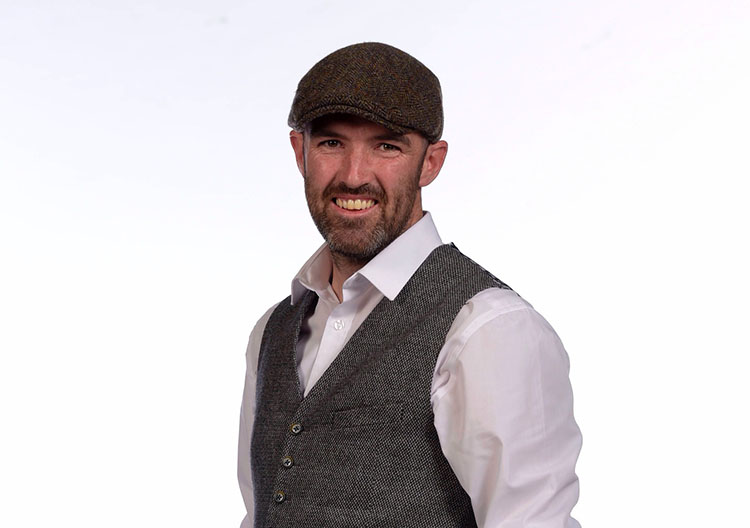 I am a 35-year-old Irish man living in the Highlands of Scotland, with my partner Anna and our two children, Freya and Oisean. I have a passion for adventure and I work as an outdoor Instructor for a personal development charity here in the UK.

My journey with breast cancer began in August 2000, when I was 19 years old. At the time I was living in Ireland and about to undertake my second year of my college degree. Not surprisingly, it came as a huge shock. I had no idea men could get breast cancer never mind a young, active 19-year-old! I subsequently found out that having breast cancer at that age was a very rare occurrence.

I first noticed a lump under my left nipple when I was 18, but ignored it completely until two months before my twentieth birthday. My lump had very gradually gotten bigger and I started to get a yellow and red discharging from my nipple. This was the trigger that prompted me to go the doctor. On arrival, the doctor assured me that it was probably just a cyst and that they would remove it as a precautionary measure. However, about a week later the doctor got in touch to say that the lump was in fact a tumour and that I had breast cancer and so the emotional roller coaster began.

Within two weeks I was sent to the Mater hospital in Dublin to undergo surgery to have my left breast removed plus the lymph nodes under my arm. The surgery was a success, but they opted to treat me with chemotherapy and radiotherapy to fully tackle the disease. I received chemotherapy once every three weeks until Christmas. Thankfully the chemo was not too arduous on me with only my head hair taking the brunt of the punishment. In February of the following year I received six weeks of radiotherapy. Fortunately, my treatment was successful and I have had no further relapses with cancer.

There is no family history of cancer in my family. I have not had any genetic testing, yet. I didn’t actually know it was a thing! I will get myself and the family tested, as I think it is important to protect them from a similar fate.

I am sharing my story with The Male Breast Cancer Coalition because I feel it is so important to highlight that breast cancer can happen to anyone, even young men! I feel strongly that men need to have this awareness. It can be too easy for a man to ignore abnormalities in their breast tissue and to presume that it is nothing because that’s what I did!

With male breast cancer on the increase, men need to have the same level of awareness of breast cancer as women do. It is vital that we get this message across to the male population, as early detection has a big part to play in successfully tackling the disease.

My involvement with The Male Breast Cancer Coalition plus Breast Cancer Care in the UK has given me a wonderful opportunity to promote male breast cancer awareness. It is a privilege to do so and it has reminded me that I have so much to be thankful for (pre and post cancer). My reflections on my personal journey with cancer have reminded me how important it is to have and feel a sense of hope. Cancer is a sobering reality, with many emotional ups and downs along the way, but with a focused mind-set, a determined ‘heart’ and a loving support network, cancer can be overcome!

It is my aspiration that our stories here at the Male Breast Cancer Coalition can inspire a sense of hope, courage and determination for anyone who is currently going through cancer. It is a chapter in my life I look back on regularly, because it helps me to look forward with a much clearer perspective on what it means to be alive.