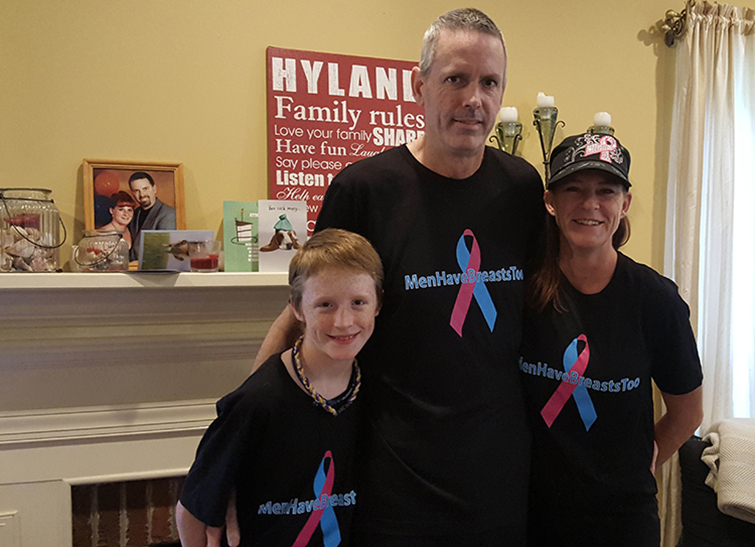 My family and I have had to overcome several hurdles, but slowly and carefully we made it through them and experienced better times. That was until 16 months ago.

In February of 2014, I was diagnosed with the flu. For the next three months I had slight yet annoying middle back pain. And yes, my wife Jennifer kept trying to get me to schedule an appointment with my physician about the pain. I refused to go because the pain wasn’t too bad.

When I woke up on May 1st, the pain was much more severe, and by the end of the evening, it became a mind crushing pain.  Because I’m 6’5”, lower back pain was not an unusual occurrence, but this was in my middle back and the pain grew exponentially throughout that day.

Jennifer and I were at an evening baseball practice for my son and left briefly to take a look at a new project for work. As a subcontractor in the custom homes construction industry for over 25 years, I was always working!  When we arrived at the job-site, I was in so much pain I couldn’t even make it beyond the car. Since I already had an appointment scheduled with my doctor for the following morning, all I wanted to do was go home and lie down.  Jennifer would have none of that and drove us straight to the emergency room.  I couldn’t breath in a sitting position, and laying down would create even more extreme pain.

The doctors in the ER were baffled and could not figure out what was wrong with me.  I was given pain medications, but nothing was helping.  Eventually I was sent home with some heavy duty pain meds and orders to follow up with my family doctor.

The next morning I met with my doctor and she referred me to a sports medicine guy in the same building.  He put me on even stronger pain medication and scheduled physical therapy.  If the back pain didn’t subside within two weeks, I was to return.  A week and a half later I was back, given more pain meds, and the same instructions to see what would happen over the following two weeks.  Still no relief, so an MRI was ordered.  When I was done with the MRI, the radiologist insisted on helping me get off the table. Strange at the time, but now looking back, he must have seen something alarming.

The MRI was on Thursday before the Memorial Day holiday weekend. At 5:25 the same evening, my phone rang. I let it go to voicemail after a very long day. Then Jennifer’s phone rang. It was the sports spine specialist who ordered the MRI. He explained my T9 vertebrae had completely collapsed and the MRI showed several lesions around that area of my spine. To me, a lesion was an open wound or sore, so the learning began…he indicated this all went beyond his expertise, and I would get a call from an oncologist the next day. I felt every bit of my soul slump to the floor immediately. The evil word “cancer” had been kicked around during the conversation. I mean, why else would an oncologist be calling me?

At about 2pm the next afternoon, I received a call from a thoracic oncologist’s office asking me to come in for blood tests. They even said they would stay late and this was the Friday of Memorial Day weekend!  The original thought was to check for multiple myeloma.  The doctor and his nurse were such a calming influence for us at the Levine Cancer Institute in Charlotte. They really helped us to keep it together.

After a real long, sleepless weekend, we found out it was not a blood cancer.  A CT was scheduled right away. The same evening my oncologist called to inform me I had a mass about 2” in size below my right nipple and additional lesions on my pelvis, right femur and in my lower lumbar.

The next step was a breast and bone biopsy. Jennifer accompanied me, but it proved to be a bit too much for her sitting in on the breast biopsy.  She had to leave and recoup in another room. I was diagnosed with male breast cancer and it metastasized to my bones. Bad news on one hand, and yet good news because we would only need to fight one type of cancer. I was immediately scheduled for 10 rounds of radiation to target the tumors in my back to assist in lessening the pain. These were the most horrific treatments I had endured. The radiation sucked the energy right out of me, and I was constantly nauseous.

I was referred to a breast cancer oncologist for treatment and this is when we learned I had stage IV metastatic breast cancer. I am both estrogen and progesterone positive, so hormone therapy was an option along with a monthly infusion of a bone strengthener.

Everything was going as planned, until I developed blood clots in my right calf and groin area. As a result, the cardiologist prescribed a fairly new blood thinner. On December 22, I woke up on the shower floor after having a stroke. My wife heard me start to fall in the shower and thankfully was able to keep me from dropping like a rock.  I was only able to remember bits and pieces of that day, but had no lasting side effects from the stroke. Jennifer tells me my leaving the hospital and coming home on Christmas Eve was the best present she could EVER have asked for.

I had a second stroke in mid January, and this one was more serious. I had speech issues, swallowing issues, over all strength and dexterity problems, and more. I spent seven nights in the neurosurgical ICU. My wife stayed with me every single night and most of the days. When I was released at the end of January, I began physical, occupational, and speech therapies. During my stay in the hospital I was removed from one blood thinner and placed on another. My oncologist also stopped by my room and told me we needed a new plan for attacking the cancer.

The week following my release from the hospital, more CT scans were done. The cancer in my bones had grown.  I was immediately put on weekly chemo and the hormone medication was changed.

Due to the severity of the second stroke that affected my entire left side, I was unable to swallow, so couldn’t eat. After the second stroke, I lost 50 pounds.  Prior to the first stroke, I had lost 30 pounds from the stress of my diagnosis. I had lost a total of 80 pounds! It was such a dramatic weight loss my oncologist told me I had two options. The first was to have a feeding tube installed, so I would get stronger and she could continue to treat me. The second option was to NOT have the tube installed, but if that was my decision, she would no longer be able to treat me. Again, Jennifer took control and wouldn’t let me even think about option b. She told the oncologist to schedule the procedure to insert the G-tube and a port the chemo at the same time. In my wife’s mind, she was refusing to allow me to give up and die. She was not then, and still is not ready to let me go for both her and our 12-year-old son’s sakes.

On March 18, 2015, the G-tube and port were installed. The tube feeding went very well for a time, but then began to work against me. Every feeding made me extremely ill. It began to defeat the entire purpose. At this point my wife became extremely adamant that I do what needed to be done and to start eating as soon as possible. The dietician whole-heartedly agreed. I drank four to seven boosts a day and ate as much real food as I could tolerate. The G-tube was removed in July. I gained a whopping 30 pounds which is amazing news! Because I was doing so well, the dietician even came in said she was ”breaking up with us!”

My chemo lasted for 21 weeks. A June CT indicated I remained stable, so chemo was stopped. NO MORE CHEMO FOR NOW!

My most recent CT and bone scans were at the end of September.  The breast cancer that had metastasized into my bones remains stable and the mass on my right breast has decreased in size as well.  All in all, this is amazing news!

We can’t say enough awesome things about the Levine Cancer Institute. Everyone is so caring, loving and considerate with their patients. Hands down, they are ALL amazing individuals in our eyes and hearts!

Right now we go from CT scans and follow up appointments waiting for results with fingers crossed that nothing has progressed. We are currently in a holding pattern until something changes. If/when the cancer progresses, we will consult with our oncologist to discuss what’s next.

Please keep this in mind —  MEN HAVE BREASTS TOO AND MEN GET BREAST CANCER TOO!