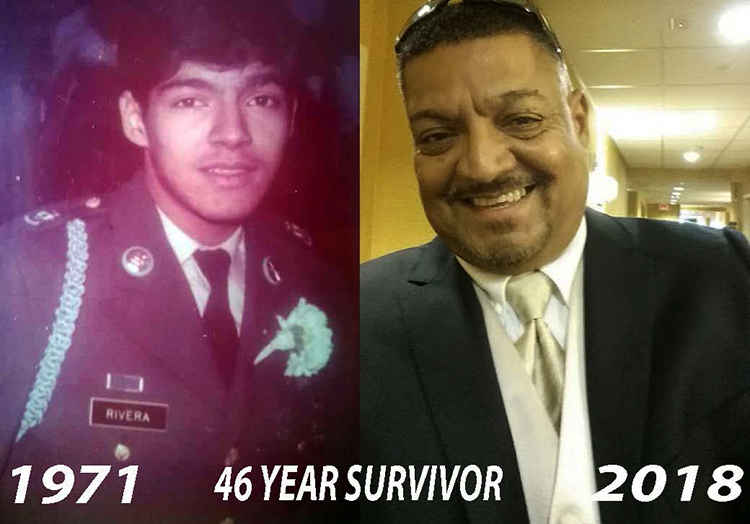 After basic training at Fort Benning, Georgia, with the 197 Infantry Brigade, I received orders to go overseas. On a routine examination, the doctor noticed a bloody discharge from his left nipple. I tried to explain that it was because I was working out and developing muscle mass. After further testing, in September 1971, I was shocked to learn he had breast cancer. In denial, and embarrassed to find out I had a women’s disease, I argued with the doctor, since I thought it impossible to get a women’s disease. I should have known better, because my aunt passed away of breast cancer a few months earlier, so the disease was in my family. I was only 18.

I made up an elaborate story to tell people, including my buddies, that I had gotten stabbed. I needed to go for surgery, which went on for a while, and I was unwilling to discuss my surgery with anyone. Still in denial, I would tell myself I’m a soldier, I’m a man and I shouldn’t be going through this disease.

I was told that because of my breast cancer, I could get a medical discharge, but I refused because I wanted to be a soldier and serve my country to the best of my abilities. On November 12, 1973 I was honorably discharged from the military. I never told anyone what occurred to me since it was too embarrassing, anytime I went to the beach, or anywhere I had to remove my T-shirt, I would always do something to cover the scar. To this day I still cover the scar.

Several members of my family have also had breast cancer, including my grandfather who died at age 110, an aunt and a niece. Breast cancer was hard for me because I considered it a woman’s disease. I now know that this disease doesn’t discriminate.

My first wife, now deceased, had metastasized Stage IV breast cancer which spread to her brain. She taught me not to be afraid to talk about my disease, and to help other men to identify with their disease, and that beauty comes from inside not from the outside.

I am now retired from Memorial Regional Hospital, where I received the Presidential Service Award for my work with Hollywood Fire Rescue Emergency Response Team. Now married to Carmen, I am also the father of four adult children: Brenda, Jasmine, Sammy and Samantha. I enjoy remodeling houses, helping others, and playing with my dogs and cats, and I intend to live life to the fullest, always putting God first.