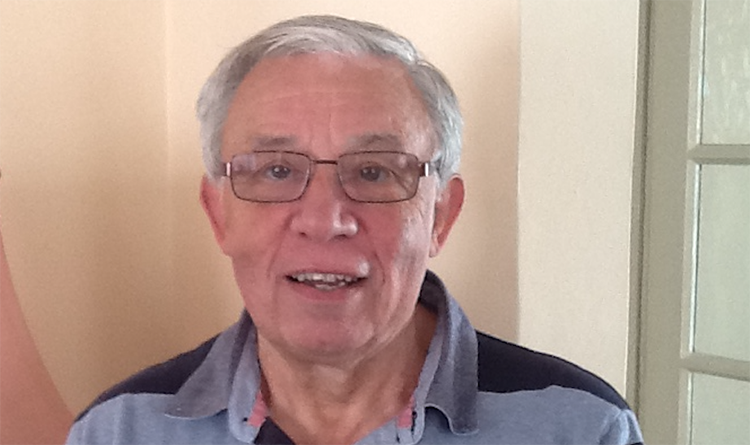 So what can I tell you that is important to me?

Well it is 100% important to me to tell you that I am a 76-year-old gay man who has been ‘out’ for many years and who has been an LGBT activist ever since that time when I began to be open to the world about my sexuality. And, this gay man, is happily married to Nigel, and they ‘tied the knot’ just 4 years ago.

Why did I wait so long to find Mr. Right? It wasn’t like that; Nigel is my third ‘Mr. Right’. The first one lasted almost 30 years, finally finishing with the horrors of his profound Alzheimer’s and him being found dead on our beach after leaving the residential home where he had been for eight years.

The second one lasted just seven years when he succumbed to mesothelioma (an asbestos related cancer) and he sadly died too.

As I say, with a smile on my face, when I’m speaking to groups, Nigel feels kind of vulnerable as he continues the journey with me.

So that’s the first set of important things out of the way.

The next thing is that I first found a lump in my chest some 18 years ago but it turned out to be just fatty tissue, and since then I’ve been checking myself over, as and when. In December 2015 I found one again, and I didn’t need convincing that this might be something really quite serious, and so it was. A mastectomy followed, and the sentinel nodes were also removed, and I completed a course of radiotherapy in August 2016. I did not have chemotherapy.

How did I react to the news? I have to confess that after all the shit of previous years experiences, and there is more than I mentioned, I just sort of said to myself ‘well here we go again’. My husband simply said ‘that’s a shock’ and then we sat, looked at each other and quite purposely, set about working out what coping strategies we might need in order to get through this. Our friends reacted to the news with the same shock and surprise but made clear that they were going to be there for us and laughed with me when I grimly said that I might be looking for someone interested in buying just one nipple ring!

Brave eh? In truth, not a bit of it. The horrors returned every night as I tried to get to sleep and I was so grateful to have someone to hold me and calm me down and I often thought of those single people, faced with a similar diagnosis, who had no one to hold and whose thoughts like mine might range from facing the surgery to perhaps facing the end.

Together we devised our coping strategies. We would be in it together – phew! And Nigel quickly decided that his role was to provide the glass half full approach to life, as an antidote to my glass half empty attitude. Goodness, how I’ve appreciated that over the months.

Now on my first round of medication I started to search the web for forums and chat lines concerned with breast cancer. It was a relief to see that the side effects of treatment and medication I was experiencing were not specially different from what others were going through but I could have done without it. I also began a regimen to ensure recovery and to increase my physical fitness and so every other day I do a couple of miles of brisk walking and it does my neurotic mind a power of good, despite sometimes looking a hundred years old when I return. We live just a few metres from the ocean and the sights and the sounds do me a power of good. I often shout out loud ‘behold, the sea, itself’ (Walt Whitman) and, no doubt, passers by think ‘there goes that silly old man again’.

Without the walking I still feel annoyingly tired at times and there are side effects from my treatment and the consequent medication which are trying and which are probably unavoidable. I’ve been used to be extremely proactive from the start of my retirement but now I’ve had to accept a more gentle approach to living.

This approach didn’t begin well, however. Faced with the very new experience of being in a hospital ward and surrounded by straight male patients I amazed myself by going straight back into the closet. I even begged Nigel not to kiss me when he came to visit and I felt so guilty about it. How could I do that!

However, since then there has been no fudging of the issue. I’m not a wimp and so this new experience has to be the time when I need to say to all and sundry; to women with the condition; to health service professionals; and to anyone else, that if you intend to relate to me then you will have to engage with my sexuality as an equal feature of my experience of having breast cancer.

So for me there is a two string approach to coping with my condition and to how I would like to be supported. The first is the fact that, unexpectedly, I find myself part of another minority, one numbering just 350 per year in the UK, compared to the thousands of women, similarly afflicted.  And, because, as a gay man, I know too well the value of group identity and community support, I know how much I need what I am not receiving, namely the presence and support of other men with the same condition. Unbelievably in spite of regularly using the social media in the UK for this purpose, I have not been able to make contact even with just one man and up until only very recently I have not found the various breast cancer charities willing to be proactive in enabling such contacts.

And the second string? Inevitably that has to have a gay element to it.  I am starting to give up the possibility of finding other gay men who also have the condition. Within our community contact with each other has been the life-blood for our survival – we are not separatist but we like being together. For me the social and psychological benefits of finding other gay men who have breast cancer would be huge but demographically I know that it is not very likely. Thank god I have a partner. And this fact forces me back to wanting to say ‘What about those single men and women facing this challenge? Where are the organisations focussing on such people’s unique feelings and needs? When will charities and support organisations wake up to the fact that we live in a world where you can no longer assume people to be in the same kind of family relationships that we have known in the past?’

How do I view the future? Well we have decided to be more sensible and talk about the creative, and sustaining use of the ‘now’. Yes we do plan and look forward to holidays, and meeting up with friends, and doing all those things which have made our lives so rich. But the secret to our living is ensuring that for us ‘the best of times is now’. Its not easy to keep to that aim and not everyone can do it but, for us, it remains the way in which to live our lives to the best.

Good wishes to all our fellow men in the same situation. Never underestimate the psychological and social significance of your existence.