I was looking in the mirror after taking a shower I noticed my right breast was noticeability bigger than my left, like it almost grew overnight. I called my primary care doctor who examined me and sent me on that day, March 2, 2015, to Akron General for an ultrasound. After the ultrasound, they wanted to do a biopsy which was scheduled for the next day. I remember thinking, men don’t get breast cancer, this cannot be true. Afterwards, I was called into my primary care doctor who informed me I had breast cancer. I got back out to my car and remember placing my hands on my steering wheel and saying, God, you have a problem, and that is where I left it. My plan was to tell only the family at first; I guess I was embarrassed to say I had breast cancer! A couple of days later, one of my granddaughters showed up with a poster that said Keep Calm and Kick CANCER’S Butt!. So I shared this beautiful poster on Facebook and the cat was out of the bag.

I went through six rounds of chemo to stop the growth and shrink it so I could have surgery. The surgery was a success, and the surgeon was able to remove the whole mass at which time he removed 18 lymph nodes for testing. All 18 came back negative. Then I had 30 rounds of radiation. As of now, I’m in remission. I’m still taking tamoxifen, which I will take for five years.

I guess a positive attitude helped, but I felt alone with there being so few men who get breast cancer. My mission has been to build awareness, letting other men know they can get breast cancer too. 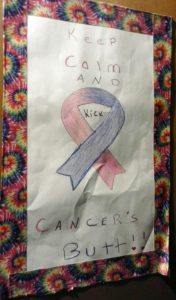