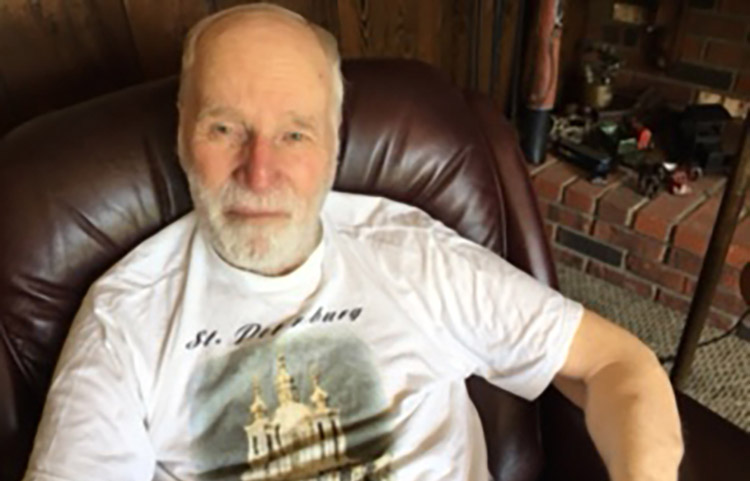 As a male, I did not think I could get breast cancer. I had lipomas (benign fatty tumors) all over my body and the one on my belt line was particularly bothersome. The belt would irritate it and it would hurt. During my 1998 physical, I asked the doctor to schedule surgery to remove the lipoma, because I was afraid of cancer. He said if it were up to him, he would not have it removed. But, I insisted.

At the surgeon’s office, I had left my reading material in the waiting room. There was nothing to read in the examining room and the doctor was delayed. He was telling a nurse what to do about an accident victim he had operated on early in the day. Out of sheer boredom, I read the breast cancer poster on the wall. One of the symptoms mentioned was an inverted nipple, which I had for two or three years. When I brought this to the doctor’s attention, he felt the lump in the nipple area and decided it should be removed as well as the lipoma. If you figure the odds of finding the cancer the way I did, they are extremely low, actually only by chance.

I had a mastectomy of my right breast followed by six months of chemotherapy then five years on Tamoxifen. One day after I had completed therapy, I was recycling paper and my mother’s funeral prayer card came up. She had died of breast cancer four years before. No one could say where the card came from. I think she was watching over me.

My second bout of breast cancer happened in 2010. A nurse found an enlarged lymph node during my annual follow up exam with my oncologist. I had my left breast removed followed by chemotherapy and radiation.  Again I was put on Tamoxifen. My third encounter with breast cancer happened in 2015 while I was still on Tamoxifen. I found a lump between where both breasts had previously been. I again had radiation treatments, which I finished right before starting income taxes.

When they did a follow-up PET scan, they found the cancer had metastasized to my lungs.  Since my breast cancer is estrogen receptor positive, I was put on Lupron, a drug for chemical castration. In males, some of the testosterone is converted into estrogen. Chemical castration with Lupron and surgical castration both stop the production of testosterone. At about the same time I developed atrial fibrillation. My local cardiologist put me on Multaq. We had told him that I was on Lupron, but he did not seem concerned.

After the appointment, my wife did a little research on drug interactions and found that Lupron should never be taken with any anti-rhythmic medication. I stopped the Multaq and was also taken off the Lupron since it has been linked to developing or worsening of heart problems. I then asked for surgical castration and actually consulted with a surgeon. However at my next appointment, my oncologist decided to put me on Faslodex starting with a shot every two weeks and then monthly shots. This was to be combined with Ibrance but we had to get insurance approval before starting that drug.

Meanwhile the atrial fibrillation became so severe that when I saw the University of Michigan Health System’s cardiologist, she immediately put me in the hospital and I was there for seven days. They were very careful to make sure the drugs I would be taking would not interfere with my cancer treatment. There is a great team effort between oncology and cardiology at U of M and a special team of doctors who work with people who have both cardiology and oncology issues.

As I said earlier, my oncologist also wanted me to take Ibrance since it had been shown to slow the progression of the cancer when combined with Faslodex. And then began a new battle. The Ibrance costs $10,000.00 per month. My insurance company would not approve it, because I was not a “post menopausal woman” and thus did not meet the FDA recommendation even though it had proven successful in other men. After a review of our financials, Pfizer agreed to give me the drug for six months. And then, wonder of wonders, my insurance company did an about face. I have to give credit to the University of Michigan for their constant pursuit of this support and getting me the help I needed.

I am currently on Ibrance and Faslodex to keep the estrogen from feeding the tumors and to slow down the progression of the cancer. I have been on the Faslodex since June 2016 and started the Ibrance in early August 2016. When I was in the hospital for the heart issues, they had to put me on oxygen because of breathing issues. When I started the Ibrance, I began to feel better within three days and my breathing improved greatly, though I am still on oxygen. I feel better and have more stamina now. I have less coughing. Two months ago I had to have a thoracentesis every week for three weeks. They took off a liter of fluid each time they did the procedure. After starting the Ibrance, I had another thoracentesis and they removed ¾ of a liter. It has been a month now and I have not had to have another thoracentesis, but I do have one scheduled for next week. It will be interesting to see how much fluid is removed since I am really feeling so much better.

I did pursue having genetic testing in 1998 and again in 2010. My BRCA 1 and BRCA 2 came back negative for mutations both times. However, I am convinced there is an undiscovered gene because my mother died of breast cancer, as did her sister. Plus, her other sister and my cousin both died of ovarian cancer.

As we began this journey with metastatic breast cancer treatment, my wife did a lot of research on the computer. At some point, she encountered the web site for the Male Breast Cancer Coalition and contacted Peggy Miller via email. Within an hour Peggy was on the phone with us and getting us involved.

I have been sharing my breast cancer story with others since my first diagnosis. I was actually interviewed locally on television three times. I have been very active in two local cancer support groups and am open to talking with any other breast cancer patients, male and female. I do this because I do not want other men to be as dumb and unaware as I was about the possibility of getting breast cancer. I see the Male Breast Cancer Coalition as another way to get the message out to others.

Metastatic breast cancer feels to me like a death sentence. My oncologist has said I could live another 10 years. I am not happy about living with this, but the only other choice is to die. I am not ready to do that yet. I am in the early stages of treatment and do not know what lies ahead. I continue to have hope that treatments will give me a decent quality of life and new treatments will become available.