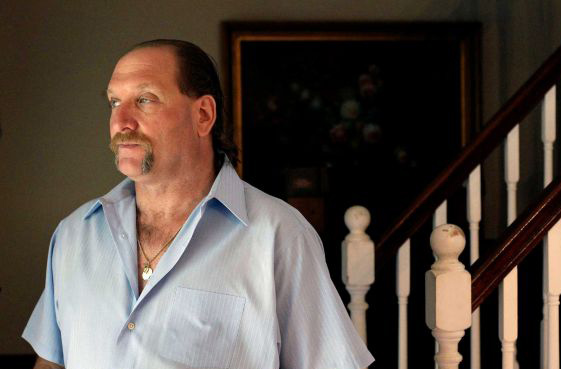 My father died of colon cancer in 1986 because he was too stubborn to go to the doctor. I promised my family, loved ones and myself, I would not let that happen.

I get cysts on my back. I have had them surgically removed and tested and they were always just fatty tissue.  When I had a lump in my left breast behind my nipple for a couple of years, I just thought it was a cyst too. What else could it have been? Guys don’t or can’t get breast cancer, or so I thought.  I had no idea men could get breast cancer.

So I go to my doctor one day in October 2006. I had a sore throat and gave him a list of things that were bothering me. I had acid reflux, a sore throat, etc. I was just about to leave and said, “Oh yeah I have this lump.” I showed the doctor my lump and he started yelling…@#$@*@# (I had known him a while)! I told him I knew I was prone to cysts. He said, “That is not one, they do not happen there.” I asked him how I was supposed to know that. He sent me for an immediate mammogram, followed by a sonogram and then a needle biopsy.

I was diagnosed with infiltrating ductal carcinoma and had a radical mastectomy in November 2006. The surgeon also removed 25 lymph nodes, five of them positive. The mass was 2.5 centimeters, stage 3. I went through chemotherapy, four treatments of AC (Adriamycin and Cyclophosphamide) and four treatments of Taxol (one every other week). I then did 36 treatments of radiation, every day Monday through Friday. I was blessed because the treatments did not affect me like other people. I did not miss any work, no nausea, or other side effects just total hair loss.

It was funny while I was bald, I would visit clients (President /CEO My PC Guy, Inc), friends and they would say, “Oh you cut your hair.” I would reply, “No I am going through cancer treatment.” Their faces would drop and they’d say, “I am sorry what kind, if you do not mind me asking?” I would tell them breast cancer and they would start to smile. I could see it in their eyes. It was like they were thinking I was fooling around because like me, they’d be thinking guys don’t get breast cancer.

The chemo was the part I feared the most. I saw how ill my father was when he went through chemo in 1986. I have since finished all of my treatments, my hair is back and there is no trace of breast cancer at this time. YEEEEHAAAAA!

Since all of this, as you can imagine, many things go through your head when they say, “You have cancer”. I have made it my mission to raise awareness of male breast cancer. If I can help one gentleman find it sooner my mission will be a success. Male breast cancer only accounts for 1% of all breast cancer, but in 2016 alone the American Cancer Society estimates 2600 men will be diagnosed and 440 of those men diagnosed with breast cancer will not make it.

I have been on my local tv channel 13 (CBS affiliate) talking about my breast cancer.  I’ve been in my local papers. I work with the John W Nick Foundation. I have done talks as well as been on the Dr. Oz show. I’ve worked with Myriad talking about men and genetic testing. I help others who are diagnosed and help them through the process. My mission is to get the public to know men can get breast cancer and I want doctors to let their patience know they need to check if they have a history of breast cancer in their family.

My mother is a 25-year breast cancer survivor and also had a mastectomy. We are of Ashkenazi Jewish decent, so I went through genetic testing. I am BRCA2 positive which also puts me at an increased risk for prostate cancer and melanoma.

In June of 2009 I was diagnosed with prostate cancer. Thankfully it was in very early stages. Because of my BRCA2 diagnosis and high risk status, my prostate was removed and no chemo or radiation was required.

Today I am a 56- year-old male who has survived stage 3 breast and prostate cancer. I haven’t been called upon much lately to talk about my breast cancer. I know there’s more awareness now than when I was diagnosed, but we still have a long way to go. Maybe I’ll get back out there again….