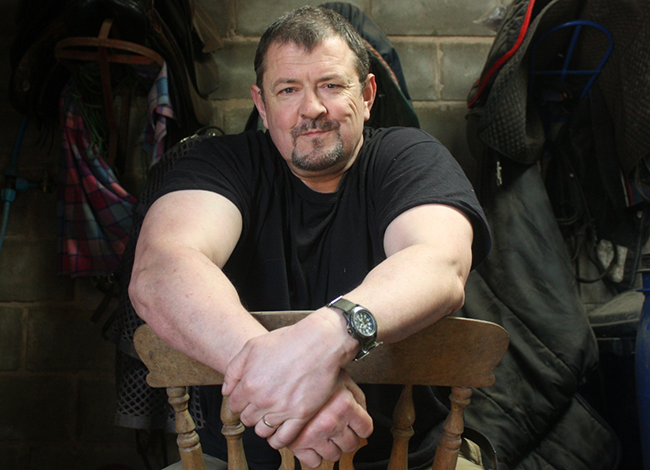 I was diagnosed with breast cancer in October, six days prior to my 50th birthday.

A couple of years ago I noticed something strange. I teach medieval martial arts and part of the costume is a heavily padded jacket called a gambeson. Mine is black but lined with white cotton. One day after a teaching session I noticed a small stain on the inside of the right chest area. It looked a little like dried blood. Being a bloke, I ignored it. That is until a few weeks later I noticed a similar stain on my bedclothes. And then on my favorite shirt. On examining my chest I found that if I squeezed the area around my nipple there was a thin brown discharge. Being a bloke, I ignored it. Eventually, it stopped. However, very slowly, a lump appeared. Smaller than a pea but quite hard, it was quite obvious to the touch. Being painless, and me being a bloke, I ignored it. That is until my wife intervened. “Get it checked,” she instructed. Repeatedly, as being a bloke, I ignored her. I ignored her until the day I realized that the lump was getting larger.

Finally, I managed to drag my lazy arse into my GP’s. I was examined by the Nurse Practitioner who called in a doctor and a quick and easy differential diagnosis was formulated. They put me on a course of Ibuprofen. Ibuprofen is not just a pain killer, it’s an anti- inflammatory. As such if the lump was a cyst or a build up of fluid, it would shrink. Over the next three weeks, it did. Problem, apparently, solved.

However, the lump, albeit shrunken, didn’t go. Not only did it not go, it started to grow again. It did this despite the fact that I routinely used an old army trick of taking Ibuprofen before strenuous exercise and I work out daily. The lump had become more or less a permanent fixture by the time I was forced to take it seriously again.

The shot across my bows came from a friend in the States. She put up a Facebook posting that detailed six symptoms of breast cancer. I’d had two of them. I went back to the Dr’s. The Nurse Practitioner examined me again, she looked doubtful when she felt at the lump but turned straight back to her computer, “I’m sending you for a referral.”

A week later, the date for my referral arrived and I duly turned up, the only unaccompanied bloke in the waiting room. I’d hardly had time to get back into what I was reading on my kindle when I was called into the examination room. The consultant and a medical student prodded and poked and I was then sent off for a mammogram and ultrasound examination.

The mammogram was awkward, requiring me to perform veritable gymnastics to insert the required bits into the machine. However an image was produced and then I was sent on my way to the ultrasound suite. I’m quite comfortable with ultrasound. Various bits of me have been bent and broken throughout my life and ultrasound scans have been used to find errant items that have either found themselves in my body or bits of me that have been torn loose and are hiding behind other bits.

Unfortunately this time it wasn’t just a case of lying still and thinking of England. The ultrasound team found something strange. The lump didn’t look just like a lump. There was fluid present so I was jabbed with anesthetic and then the lump was aspirated via a thin needle and tube. The fluid, thin and brown, looked familiar. The lump, however, was still there. Biopsy time. The ultrasound team inserted a thin probe with tiny snapping jaws to bite off chunks. The anesthetic, though good, wasn’t quite good enough. Ouch.

Sitting back in the consultant’s office, he and the breast care nurse explained the next steps. The biopsy results would take a few days, they were seeing me on a Friday, and so they wouldn’t get the results until after the weekend. An appointment was made for the following Friday.

The intervening week was strange. A swift journey to my local even failed to take the edge off the anticipation. It dawned on me that I was actually having a cancer scare.

Over the next few days the bruise left by the biopsy appeared and became more and more tender. Between my chest developing the appearance of a semi panda and the tenderness, the Damoclean prospects were difficult to avoid.

October 20th arrived and I duly ran the gauntlet of suspicious glances in the waiting room until I was called into the head consultant’s room. He quickly examined me and then sat me down. He looked down at my notes and announced without preamble- “It’s cancer.”

I’m an ex-soldier and pilot. I’m used to dealing with sudden intrusions of mortality into my life, often in a life changing manner.

The treatment plan was quite robust. Surgical intervention in the form of a mastectomy followed by a routine of either chemotherapy and/or radiotherapy. November 16th was arranged as the date.  Whatever happened, I was going to get very ill.

I told my wife as I crossed the car park walking back to my car. She’s used to left field curve balls associated with me, I yet to suffer a ‘conventional’ injury, and was half expecting the diagnosis. The problem would be my mother who at 91, had just moved in with us. She’d had a rough time recently and now I had to drop this on her.

Then again, whoever said life was fair?