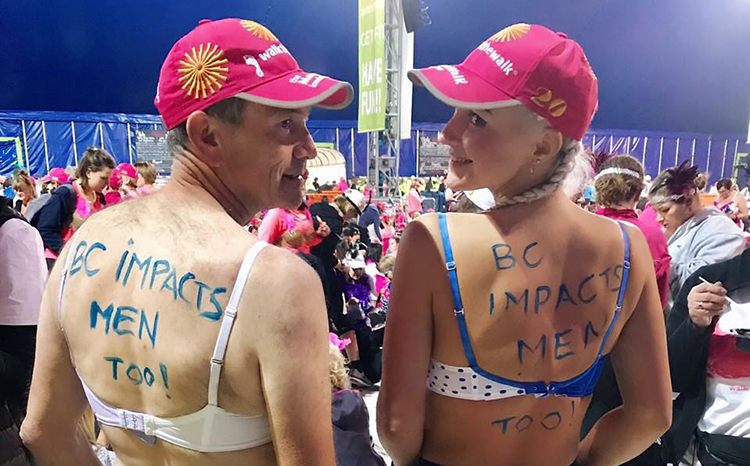 Sixty-two-year-old Richard is a Gardener. He was diagnosed with breast cancer in September 2015. “It was just over four years ago when I first discovered something wasn’t quite right.

I’d always been a keen runner so initially, when I was getting irritation in the area around my nipple, Thought I had jogger’s nipple. I was having a shower one day when I noticed something didn’t feel right. There was a lump just below my left nipple and I knew there was something more to be concerned about.

A week or so later, I had my appointment at the doctors. I was told it was probably a cyst, and to come back in a couple of weeks if It was still there. It felt like there was nothing to worry about–it was the news I wanted to hear, but it almost made me feel like I could be complacent, and that everything was fine.

I waited five weeks before going back for a follow-up appointment, and in hindsight I think this was largely driven by the message the doctor had given me; I feel that there was a lack of urgency to the message. I think the doctor should’ve reinforced the initial message by saying it’s very important to come back in two weeks if the lump is still there.

I was referred to the breast clinic for a biopsy so they could do some further investigation. I didn’t even know that men could get breast cancer, mainly because I’d just never had to think about it. I’d raised money for breast cancer causes in the past, but there was always a strong focus on women who are affected by the disease.

When I went to the breast clinic at the breast clinic at Clatterbridge Hospital there was obviously more focus on women, so it felt a bit weird when I first went in, but I just got on with it. I was definitely self-conscious and felt everyone was wondering why I was there. If there was an information poster with a picture of a man saying “Are you aware men can get breast cancer too?” it might be better?

This would be a perfect opportunity to raise awareness as there are usually a lot of men accompanying their partners, so both men and women would be made aware of the facts.

I had the biopsy and they found an 8mm tumor I was diagnosed with ductile carcinoma breast cancer a week before Christmas. I was surprisingly laid back about my diagnosis, especially considering there was no history of breast cancer in my family.

My consultant was quite positive about my prognosis and advised me to have a mastectomy on my left breast.

To start with, because breast cancer is generally viewed as a women’s disease, I must admit I thought “why me? what’s wrong with me?” I realized both women AND men have breast tissue so in theory, although the chances are small, men are capable of getting breast cancer.

On January 5th, 2016, I had my mastectomy. As well as this, I had lymph nodes taken from under my armpit, which on analysis were clear. Thankfully, I didn’t have to have chemo or radiotherapy. I took tamoxifen for a month, but it gave me blood clots, so I wasn’t able to continue taking it and had to self-inject blood thinners to prevent further clots for the following six months. Apart from getting the blood clots, my overall experience was good, and I now go for regular check-ups.

I didn’t use any support groups during, or after my treatment, but since having breast cancer, I have become a strong advocate for raising awareness of the fact that men are affected by the disease too. There needs to be more research into the causes and treatment of male breast cancer.

At the time of my diagnosis, if there had been a way of being in contact with another man who had also been through breast cancer that would have helped me. As there are so few men diagnosed in the UK each year, I wonder if there is a way of setting up a database where you could add your name, with a view to further possible contact.

I now volunteer as a Macmillan breast cancer buddy to support men who have been diagnosed with breast cancer.

I was asked to do a presentation to 80 trainee nurses at the hospital where I was treated. I asked them how many knew that men could get breast cancer before they entered the medical profession, and only one third of them had, which surprised me.

My advice to others would be–if you see or feel a lump, go to your GP immediately and make sure you’ve taken it to the point where you feel happy you know what the lump is.

It’s all about spreading the word for me now. It was interesting to meet other men who have had breast cancer at an event organized by Walk the Walk. We all got a chance to chat and share our experiences, which was great. There is a need for men diagnosed with breast cancer to get together as there’s simply more impact in numbers!

Clinical outcomes for men are at best, no better than women. For most men, symptoms of breast cancer should appear earlier due to them having less breast tissue. I feel this should lead to earlier diagnosis and better outcomes. So, we need to address the awareness issue-we need to eliminate any potential stigma related to breast cancer in men. Finally, we need to support those men that need it post diagnosis and treatment appropriately. 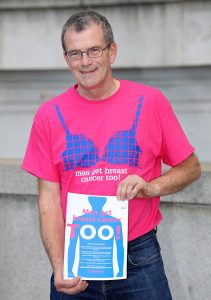 Walk the Walk, Men get Breast Cancer too photocall, London Marriott County Hall Hotel, London. Six men who have been diagnosed with breast cancer gathered together at the Marriott County Hall Hotel in London to share their experiences and launch a nationwide awareness campaign. Ahead of International Men’s Day (19th November) the men are encouraging people across the country to download a special “Check your Chest” poster to display in locations across the UK.
For more information, contact jennifer@walkthewalk.org or visit www.walkthewalk.org