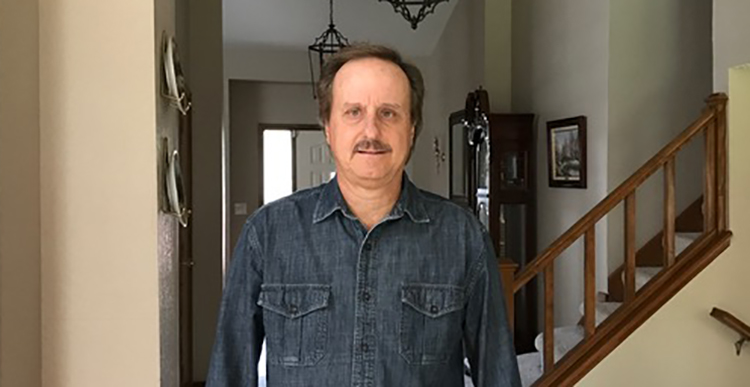 I have always considered myself in good physical health. I am an avid runner, running half marathons often. I have never had any major illnesses or health problems.

In 2014 I felt a lump on the right side of my chest. Being a man, I thought nothing of it and it would just go away. After six months of ignoring it, my wife told me I HAD to go to the doctor.  I did, eventually.

Before I knew it, I was having a mammogram and then an ultrasound. Turned out there was more going on than just the one lump. There was another cell showing a cancer anomaly on the right and two more on the left. Because of the findings, four biopsies were performed at the Medical Center in Centennial Colorado, two on each side of my chest. They all came back positive. The right side was diagnosed as Stage 2B with a three centimeter sized lump. The cancer had metastasized and spread into three lymph nodes. The two left side biopsies showed positive for DCIS, stage 0.

Like most people, I thought breast cancer is a disease for women, not men. I was in total shock and disbelief, so was my wife. When we were told I had breast cancer, we just held on to each other and cried. We told very few people what was happening. The people we did tell, none of them believed it at first. It took a while before they accepted the thought breast cancer in a male (me) could happen. Eventually, my wife and I decided to do whatever it would take to beat it.

I had a double mastectomy the day after Christmas on December 26, 2014. Eighteen lymph nodes on the right were also removed.

There wasn’t much information regarding male breast cancer when I was diagnosed, so I had to rely on all the material for women’s cases and what the oncologist and nurses were telling me about what to expect in the way of side effects from the treatments. I was also told not everyone has the same side effects.

I was then to have 16 rounds of chemotherapy over 20 weeks. My oncologist told me there weren’t enough statistics out there to know how men will be affected by the traditional prescribed treatments, but I was to receive the same treatments a woman would get for my diagnosis. Well, I got hit by almost all the side effects; mouth sores, nausea, bone pain, constipation, food tasting like a metallic glue, complete hair loss, skin turning a grayish color, neuropathy, and extreme fatigue.

Fatigue hit about two days after my chemo infusion and lasts three to five days. My body felt like I was really sick, but without any fever. Even lifting my arms was a chore. I was faced with a different reality. The side effects were cumulative, so each time the fatigue came on stronger. Around the 16th week of chemo I got neuropathy. My hands and feet and even my face were all pins and needles. We had to stop the chemo treatments at that point.

After chemo stopped came 25 cycles, five days a week, of radiation treatments. The radiation was much easier to take. The only side effects were an extreme tan on my chest and food had a metallic taste. However, at the end of the radiation cycles I developed an extreme case of chording under my right arm, apparently the doctors told me from the double mastectomy and the radiation. Chording is when tissue collects around the veins to make them stand out and contract. Under my arm was a long band about half inch thick that was making it impossible for me to straighten out my arm. I had physical therapy for six weeks to prevent lymphedema from developing. Now I have to wear a medical compression sleeve if I go over 8000 ft. or in an airplane for the rest of my life.

Since I have siblings, I decided to have genetic testing too. I had the larger genetic test panel for all possible cancer genes. Thankfully, all 42 genes came back negative.

Currently, 12 months after my treatments, I am running again and healthy. I am taking Tamoxifen, an estrogen prohibitory, for the next five years. I am grateful to be called a “Survivor.” I will always have a fear in the back of my mind that my cancer could come back at any time.

So this is my new normal…