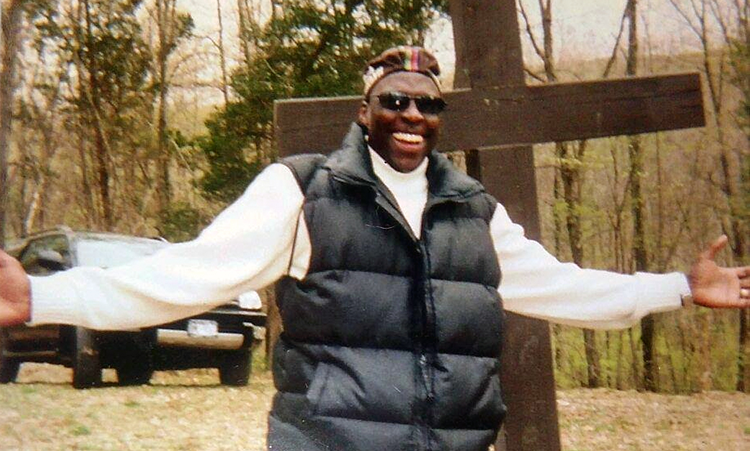 When I think back to the time I spent in the Army refueling aircrafts at Fort Irwin in CA, I can’t help but wonder what role that job may have played in my current health state.

In 2003, I was a 45-yr-old father of three, athletic, former military and one of 12 kids in a family with no history of cancer. My wife Carmen and I had been married for 13 years, but together for 15 years.

One day, Carmen felt a bump beneath my right nipple. I paid it no mind.  It was just a bump, a very tiny bump, and the size of a mustard seed. As we touched the bump it felt loose, like it wasn’t attached to anything. I thought nothing of it, but my wife was concerned and wondered how it could just appear within my right nipple for no reason.  She suggested I go to the doctor. There were no other symptoms, so what could be wrong?

About  five or six months later we both noticed it got bigger.  My wife said it felt as if the bump was growing little arms stretching out of it.  That’s when I decided to listen to my wife and get the bump checked.

My primary care doctor did a biopsy, showed me the lump, and then sent it away for analysis. Ten days later, the doctor told me to come into the office. He wouldn’t talk to me on the phone, insisted I see him in person, and so I went to the appointment alone.

He used big words like carcinoma and others I can’t even remember now. I said wait a minute man, what’s happening here? When I walked out of the doctor’s office, I couldn’t hear a thing. No cars, no birds, nothing, everything seemed to be silent around me.

When I got home, I wrote my wife a note. I couldn’t tell her out loud, I wrote, “I have brest cancer”, spelling breast wrong.  To this day she still has that note.  She looked at me and just said, “You’re kidding right?”  With tears in my eyes I said “No.”  At that point I realized she knew I was serious. Having been told I had breast cancer and after discussing it with my wife, I knew it was important for me to get a second opinion. That’s when I went to the Veteran’s Hospital in lower Manhattan and eventually decided to get all my medical care from them.

A few weeks later there I was having a mastectomy.  I was told I didn’t need chemotherapy or radiation, because the cancer was so tiny, hadn’t spread and was in a very early stage. I was put on Tamoxifen for 5 years.

Over the next four years, I spent time working, going to church and just trying to live a normal life.

Then in 2007 my wife felt another lump, this time it was under my right arm, the same side where I had my mastectomy.  Once again I had surgery for the cancer.  The doctors removed the tumor from my right armpit along with some of the lymph nodes.  This was followed by eight weeks of very strong and aggressive chemotherapy.

I went back to work after my recovery, but I was beginning to have excruciating pain in my legs and hands. That’s when I was diagnosed with Sensory Peripheral Neuropathy. The doctors gave me plenty of medication for this new condition, and said it was the result of the chemotherapy.  They also said I had nerve damage as well.  At this point I decided to retire.

Since retiring, I began to volunteer at the church to help me take my mind off of my conditions.  In addition, through a series of circumstances and meeting people, I got a chance to speak out about male breast cancer.  I have spoken in hospitals, at multiple health fairs, men’s homeless shelters, and have been on Channel 7 in NY twice.  I have also done an interview with BET, worked with former NBA players Walt Frazier and Cal Ramsey, and was interviewed in the Crucial Catch NFL Magazine. Through my involvement of speaking about male breast cancer and in reaching out to men, I have received awards including two Proclamations from the Mayor’s office of the City of New York.  Currently through my church Christian Cultural Center’s website, I tell my story via video.  This video can be viewed internationally from this website under “Journey’s In Faith.” (see link to right)

Today, I am eight years cancer free, however the doctors are concerned with my heart.  They told me that my heart has weakened due to the chemo I received.

In addition, I was asked to have genetic testing.  Initially, I was not interested, but because I am now a grandfather, I am contemplating  having it done.  Because I am a man of faith, all this doesn’t concern me, because I know God is in Charge of everything and everyone that concerns me.