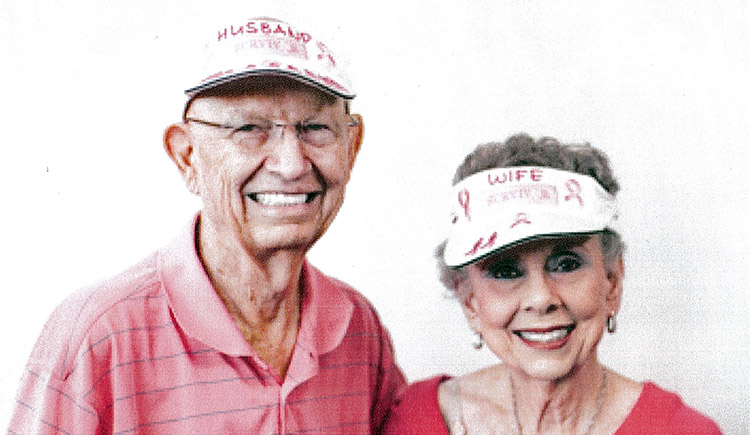 Paul Brown gives a fish hook that went completely through his finger the credit for finding his breast cancer.  He went to two different doctors, each one of them giving him rounds of antibiotics thinking the lump and pain in his left arm was due to an infection from the imbedded fish hook.

A biopsy of the lump revealed he had stage 4 breast cancer.  He went to MD Anderson for a second opinion.  The result was the same. After much prayer and discussion, he decided to have his surgery, a radical mastectomy, chemo and radiation in Tulsa.

Over the past 15 years, Paul has had three recurrences and five complete rounds of chemo and radiation.  His cancer has metastasized and the continued treatments only slow the cancer growth.

The cancer research has kept him alive for fifteen years, and we hope and pray for more years to come.  Paul wants every male to know, it should not be embarrassing to get a mammogram, your life may depend on this one simple test.

Paul’s wife Connie Brown found a lump in her right breast when she was 70 years old.  She had been getting yearly mammograms for over 25 years, and at her latest screening, they had decided to watch a suspicious lump for another year.  The following year the doctors decided to do a biopsy. The biopsy revealed triple negative breast cancer.  Connie thought that meant a good report.  She would soon learn that triple negative breast cancer is a very aggressive cancer.  A port was placed and Connie began very rigid rounds of chemotherapy.  Following chemo, Connie had a double mastectomy.  Her cancer was in so deep, but she says the PET scan was a lifesaver for her.

Paul and Connie were high school sweethearts.  They will celebrate their 56th wedding anniversary on January 27th, 2017.  They have a love and bond that few couples will ever know.  That love and commitment to one another is what kept the fight strong each time one of them was diagnosed with breast cancer.  They took turns nursing the other one through the devastating results of chemo and radiation and all the side effects that followed.

Not many married couples can claim that they have fought breast cancer together. Paul and Connie have and continue to do so.  They have volunteered together for many years with the Komen Race For The Cure and thank them for their many years of care and concerns.