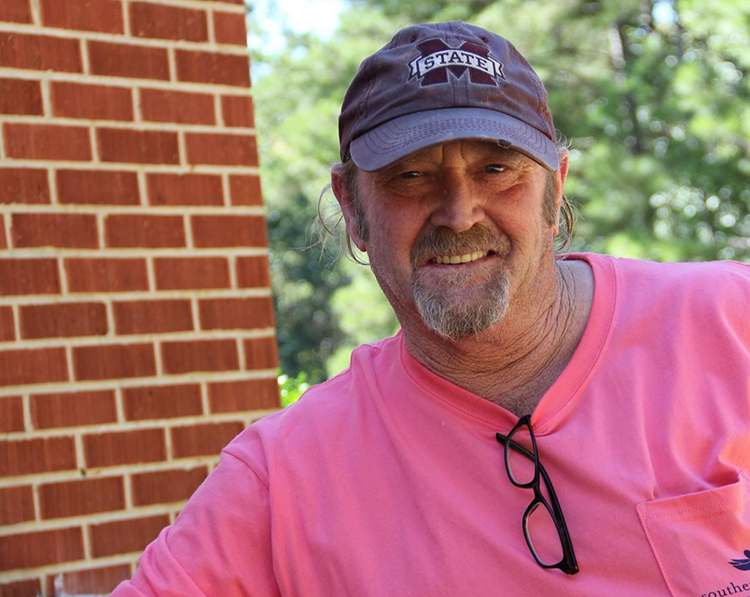 From the onset of symptoms, six months passed before 56-year-old Pat West sought medical help for the pain in his breast.

“I had pain and tenderness in my left breast,” West said. “I really just thought I had bumped it or scratched it on something.”

The American Cancer Society estimates there will be about 2,620 new cases of invasive breast cancer diagnosed in men in 2020. Typically thought of as a disease that occurs in women, men are less likely to report signs and symptoms, leading to delays in diagnosis.

Although men tend to have much less breast tissue than women, some of the signs are easier to notice in men but are often chalked up to some other issue, like infection, rather than something as critical as cancer.

West admits he should have listened to his girlfriend Carla, whom he recently married. “I showed the spot to her and she told me I needed to get someone to look at it, but I didn’t listen,” he said.

Later, Carla was sitting with a friend’s dog who, coincidentally, had been trained to detect illnesses or disease in humans. “When I sat down on the couch the dog hopped up in my lap and laid her head against my left breast,” he said. Once again Carla advised West to get a checkup as soon as possible. “She told me again that I really needed to get it checked,” he said. “But I wouldn’t listen.”

West brushed off the advice as he became more complacent or used to the discomfort and pain in his chest. Diagnosed with Multiple Sclerosis in 2000, West was at a routine checkup when his wife suggested that he let his doctor take a look at the area. He pulled his shirt up and his doctor’s reaction was immediate.

“He looked at it and told me it had to be checked right away,” West said. “He sent me straight to another doctor.”

The diagnosis was staggering to West. He was completely blindsided by the fact that men were susceptible to breast cancer, let alone that he had it himself.

“I was totally shocked,” he said. “I knew something was wrong, but never dreamed about it being breast cancer.” Because breast cancer is more common among women, they tend to be more aware of the possible warning signs, but many men aren’t aware they can get it at all. They may ignore lumps and rationalize the pain for some other reason.

“I should have listened and gone to the doctor sooner,” West said.

West had surgery to have his left breast removed.

Male breast cancer forms in the breast tissue. According to the Mayo Clinic website, it occurs when some breast cells divide more rapidly than healthy cells do. The accumulating cells form a tumor that may spread or metastasize or nearby tissue, to the lymph nodes or other parts of the body.

“I’m very fortunate. They were able to get all the cancer,” he said. “I take medication to keep it from coming back.”

West takes the Tamoxifen, one of the best-studied and most often used hormone drugs for breast cancer in men.

According to the American Cancer Society, some breast cancers grow in response to the hormones estrogen or progesterone. Estrogen and progesterone are usually thought of as female hormones, but men have them in their bodies also, just at lower levels. About 9 of 10 breast cancers in men are hormone receptor-positive.

West is hopeful the drug will keep cancer at bay, but his real hope he says comes from his faith.

Not only does the 56-year-old battle Multiple Sclerosis and breast cancer, but he is a recovering alcoholic.

“Without God, I am nothing,” he said. “I spend a lot of time reading my bible and praying. It’s my happiness and it can’t be defeated by MS, alcohol, or breast cancer.”

Story and Photo credit to The Itawamba County Times