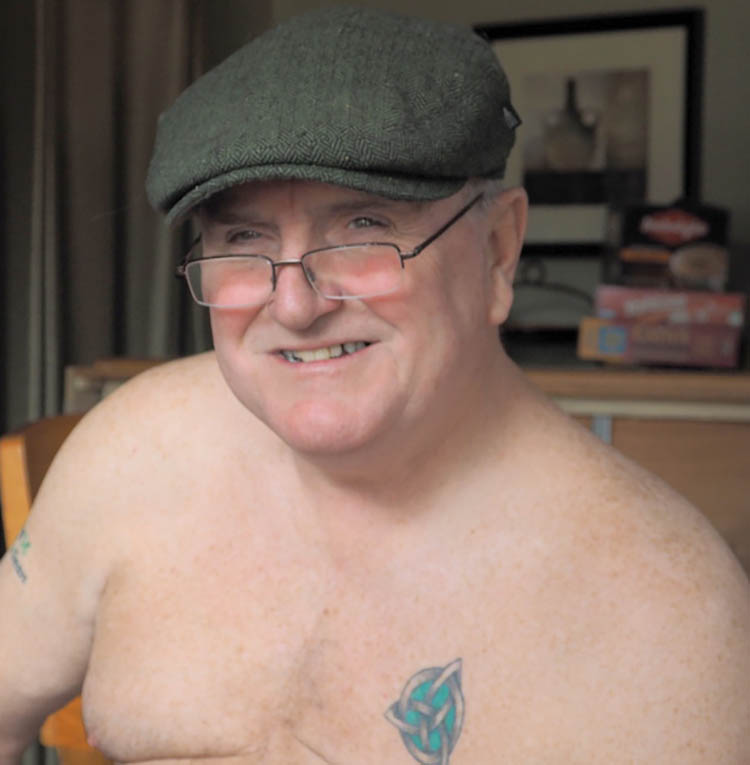 My story actually begins with quadruple bypass surgery in 2001. As a result of this surgery the severed nerves to my left breast left it with a constant feeling of numbness. I would check on a daily basis to see if sensation would return to my left breast area.

Then in May 2009 I noticed a lump by the nipple on my left breast. It was a bit tender depending on how I rolled on it in bed. I stopped taking one of my blood pressure medicines, which had a side effect of developing gynecomastia, thinking it was the cause of the lump and tenderness. The next visit to my General Practitioner showed an increase in BP and I explained to the doctor why I stopped taking the medication. He examined my breast and said the lump was probably a cyst. To be safe he sent me for a mammogram, which was followed by an ultra sound and then a biopsy. I called my GP the following week on a Friday and he told me I tested positive for cancer. I left work after informing my friends/co workers of the situation. It was difficult for everyone as you can imagine.

The hardest part of this diagnosis (I could deal with it personally) was how to inform the love of my life, my wife Paula, our children and my relatives of my condition. It was extremely difficult for me to see the pain inflicted by this news on all my loved ones. Paula and I have been married for 42 years. We have three children starting with Jennifer (born in Scotland while we were stationed there in the Navy), Kellie and Sean and seven grand children. Paula has been by my side through all of this (she even surprised me with a pink ribbon tattoo on the back of her neck… my name scrolled inside). She is the reason I have faced this terrible disease with the positive outlook I have. I come from a family of eight, one brother and six sisters. Sadly my brother passed on from a ruptured aneurysm in 1985.  My six sisters however are the backbone of this Scotch/Irish family. My oldest sister also had a cancerous lump removed from her breast last year. They have supported me immensely during the trying times. I was so pleased when I learned I did not carry the BRCA gene mutation.

I assured everyone we would address my breast cancer as I did my quadruple bypass. It was then I contacted my son Sean who worked at Harvard Medical Research in Boston to get some contact information at Dana Farber Cancer Institute right down the street from his office.

My GP set me up with a general surgeon on Tuesday the following week. When I called DFCI I explained I didn’t know what questions to ask let alone what they needed from me. I felt impotent at this point. DFCI very kindly took control of the situation for me. They told me they needed three things from me; diagnosis (Invasive Ductal Carcinoma), tumor size and hormone level. I called back with the information twenty minutes later and received an appointment with an oncologist and a surgical oncologist for Monday the next week. I contacted my GP and lined up all my referrals and went into DFCI on Monday.

In June 2009 I had a mastectomy of my left breast and nine lymph nodes were removed, four with microscopic cancer activity. I believe my cancer was considered Stage 2.5 to 3. The low activity in the nodes warranted the 2.5, but since there was nodal evidence could also be 3. This was followed by two courses of chemo treatments and then radiation therapy. I tolerated all of the procedures quite well. Dr. Beth Overmoyer was quite adamant about me not feeling nauseous from the treatments. I followed her advice to eat when feeling “queasy” because she warned the side effects were even worse on an empty stomach. I think I put on weight during chemo. The radiation burns did bother me some and I wore tight fitting T-shirts to minimize the chafing.

My family threw a wonderful post chemo party and we all celebrated. I have been doing well for the past seven years. Yearly visits to DFCI for checkups continue.

I am currently on my seventh year of taking Tamoxifen to keep estrogen levels low. I’ve had some side effects, including hot flashes. When my oncologist handed the side effects sheet for Tamoxifen to me and I read them all I said, “Really??”  Everything was female related. I told her she needed to create a male version too!

My family and I believe strongly in raising awareness of male breast cancer. I have been blessed with many opportunities to get out and push this cause. I attended Red Sox baseball games and accepted charity foundation checks from ball players. I have done the Jimmy Fund on WEEI radio assisting them in their fund raising efforts. My daughter Jennifer contacted the Komen group and requested they put a blue dot or diamond where the pink ribbon crosses to signify a small portion of the cases are male. So far nothing has been done. Since I am just about seven years post op, things have slowed down a bit for me.

DFCI has been my lifeline and I have referred at least four people to there for breast cancer issues. I belonged to a MBC call in group for two years thanks to DFCI. The first year we all got together for a luncheon in Boston. It was great to put faces to the voices. One of the members was Peter Devereaux, a devout advocate for the MBC awareness cause. Sadly he passed away and you can read about him on this website too.

This has been quite the journey for me and my loved ones and I do not know if there are other chapters to be written about it. I refuse to let this insidious disease define who I am. It is however part of my life story.

To give you an idea of how I dealt with this on my own terms, here is a little anecdote. I had a vacation booked to Cabo San Lucas prior to my chemo schedule. I asked my oncologist to build a week delay between treatments so Paula and I could go to Mexico and enjoy the tip of the Baja. Sipping tequila and lounging poolside was one of the best things I could have done to help me put my life in perspective. The trip also helped me keep a positive vibe going. Dr. Overmoyer told me a positive attitude is over fifty percent of the battle. I believed her then and I believe her now.