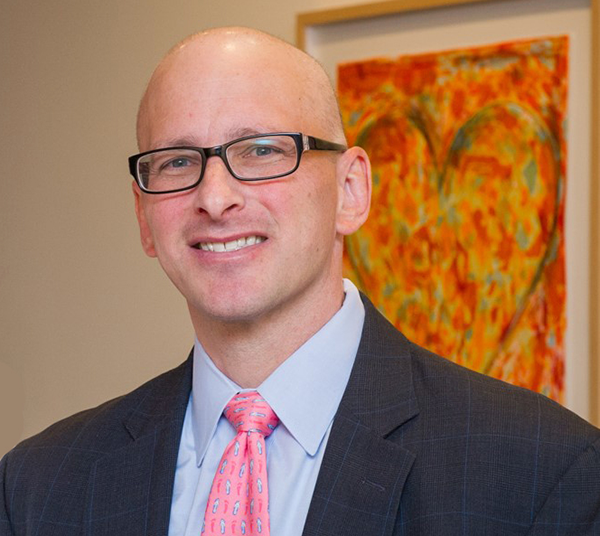 When Michael Selsman came home from his morning jog, he noticed a lump on his chest. It was strange, because he’d never seen it before, but he figured it was probably just an irritation. A couple of weeks passed, and the lump grew larger. So Michael made an appointment with his doctor. The results were surprising — stage IV breast cancer.

“I was shocked. I’d never heard of men getting breast cancer. It took me a while to even drag myself to the doctor, because I didn’t suspect that I had cancer.”

It was 2011, and life was busy. Michael and his wife Kara were working full-time, and their two teenage boys were thriving at school in their hometown of Sharon, Massachusetts. Unsure of how to tell his kids, Michael decided the direct approach was best. Adam and Jacob were courageous when they heard about the diagnosis, and have been very supportive of their dad.

“The toughest thing was that I was diagnosed pretty late,” he says. “If I’d been a woman, I’d have been more aware of the risk factors and family history, and that I was a candidate for breast cancer.”

Selsman turned for treatment to the Male Breast Cancer Program at Dana-Farber/Brigham and Women’s Cancer Center (DF/BWCC). Since only about 1,600 American men are diagnosed with breast cancer each year, it was important for him to be able to rely on DF/BWCC’s strong experience with male breast cancer. His medical team of breast cancer specialists were very supportive before, during, and after treatment.

Balancing treatments, work, and family life has been challenging, but Michael continues to work full-time and has the flexibility to take time off for treatments, when needed. When he isn’t working, he and Kara have been touring colleges with their son Adam, a Sharon High senior.

Michael says his colleagues at the Jewish Community Relations Council of Greater Boston have been incredibly supportive during his treatment. But he receives his greatest inspiration from his family: “It’s been crazy; my wife has been amazing through everything. Our family pulling together has been what’s gotten me through.”

He advises anyone who’s been diagnosed to remain positive and resist getting frustrated or depressed. His biggest challenge has been dealing with the ups and downs of treatment: “It was successful initially and then reversed pretty quickly. I’m on my fourth different regime and currently is on a non chemo protocal.

Michael is helping to raise awareness about male breast cancer, with a focus on early detection. He and his family lobbied for an official state designation to help the cause, and in 2012 Governor Deval Patrick signed a bill declaring the third week of October Massachusetts Male Breast Cancer Week.

“Men don’t have the opportunities to find breast cancer during a routine check-up like women do,” Selsman says. “I want to change that, and save other families from the pain and challenge of living with stage IV male breast cancer.”[/vc_column_text][/vc_column][/vc_row]