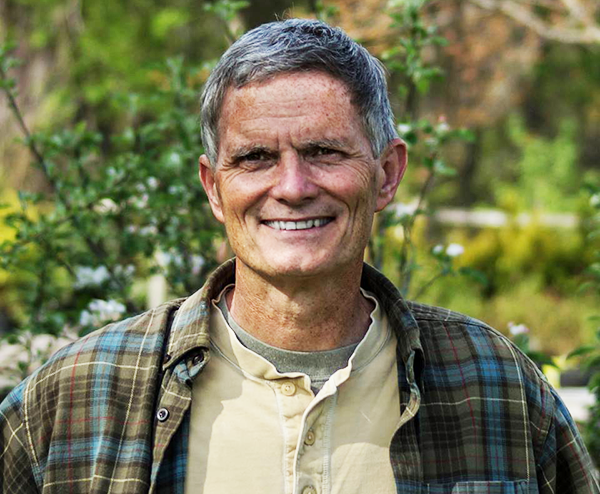 The doctor’s words hung in the air above me as I struggled to accept the concept of a man getting breast cancer.  Inside, numerous thoughts throbbed erratically, Breast cancer? But, I’m a man. Men don’t get breast cancer! This was not how I wanted to begin my fifties.

I discovered the lump near my left nipple and giving fear control, I chose to let it be. But, a few weeks later when I noticed that my left nipple was inverted I had to acknowledge that something was amiss. I had to gather the courage to push fear aside and take action.

There I sat in January 2007 firmly glued to the chair as my doctor’s garbled voice delivered the news. Stunned and dazed, I sat for what seemed like an eternity waiting for the diagnosis to sink in, to become reality.

The following year was a whirlwind. I dealt with multiple surgeries, grappled with the idea of a man having a mastectomy, took the Tamoxifen, experienced a mammogram, and learned of my BRCA 2 gene mutation. My BRCA 2 gene makes me more susceptible to certain cancers and their more aggressive forms. My oncologist now included in my medical family a gastroenterologist to monitor my pancreas since my dad had passed away from pancreatic cancer, a dermatologist, and urologist. Adding this to the lumpectomy, my left breast mastectomy, removal of my left nipple, followed by a nipple reconstruction, the BRCA gene was another layer of the cancer out to destroy any sense of a normal life. As my frustration and denial swelled, I coped by focusing on that five-year mark – the point at which I would be considered in remission – the time when I would be done with the cancer, the drug, the tests, and the fear. But a recurrence of the cancer in 2010 altered this path to freedom.

Now my therapy was more intense: the loss of my reconstructed nipple in the surgery to remove the cancer, radiation, and a more potent drug. Within the first week of the drug’s introduction, its side effects exploded on the scene. What ensued was a daily struggle with the drug’s impact on my body and psyche. I was losing more of me each day with this therapy. Yet, this daily crusade was to be the catalyst for a passage to heal on my terms.

I delved into yoga, Reiki, acupuncture, and energy medicine. I became more attuned to my emotional self’s responsibility in my healing and focused on positive thoughts, releasing any anger, hurt, and resentment, and began meditating each day. I stopped the life-draining drug and chose to have a mastectomy on my right breast as a precaution. With both nipples now missing in action, I decided to have two nipple tattoos creatively inked on my chest giving me a sense of being whole. Throughout this part of my journey my BRCA 2 gene insight evolved. Its discovery initiated a much needed discussion within my family prompting my mom, brother, and sister to be tested for the gene. Their negative status unveiled that I inherited my mutation from my dad- another piece in the knowledge puzzle. Now I see the BRCA gene as a life-saving insight on my health.

In 2012 after retiring from an elementary teaching career, I wrote about my passage to raise awareness of male breast cancer and in June 2014 my book, Healing Within: My Journey with Breast Cancer was published. But even with this remarkable accomplishment deep inside I still harbored a sense of being alone. I had yet to hear about or meet another man with breast cancer. I was this tiny, blue island in a sea of pink.

But my solo journey was to change. In October 2014 an article on my passage with breast cancer was published in our local paper and I received an email from Peggy Miller inviting me to connect with the Male Breast Cancer Coalition. As I read the numerous, personal stories of male breast cancer survivors on the Coalition’s website, I no longer felt alone. Through the MBCC, my partner Tim and I were invited to be interviewed for the upcoming documentary, Men Have Breasts Too. In sharing our journey for this film, I felt a deeper connection to this family of men and the compassionate women striving to give this disease a voice. But the ultimate gift was in June 2015 when Tim and I were in New York City attending a fundraiser for the documentary and I met, for the first time, other male breast cancer survivors. Personally connecting and speaking with another survivor was empowering, amazing, and truly healing!

Today I speak to various audiences about my journey and write about my experiences as a man with breast cancer on the Anti-Cancer Club’s website. In July 2015 I began a new and exciting adventure of hosting my own radio show, Healing Journeys with Michael Kovarik, on dreamvisions7radio.com. Each path – my speaking, writing, and radio show – is an avenue to help raise awareness and to encourage men to learn and share about our disease. By sharing our experiences with breast cancer we remove the stigma associated with this disease. We bring to light the dire need for sufficient funding in developing effective treatment therapies specifically designed for men and we send the message that knowledge is power – knowledge is life.

MY BOOK: on Amazon