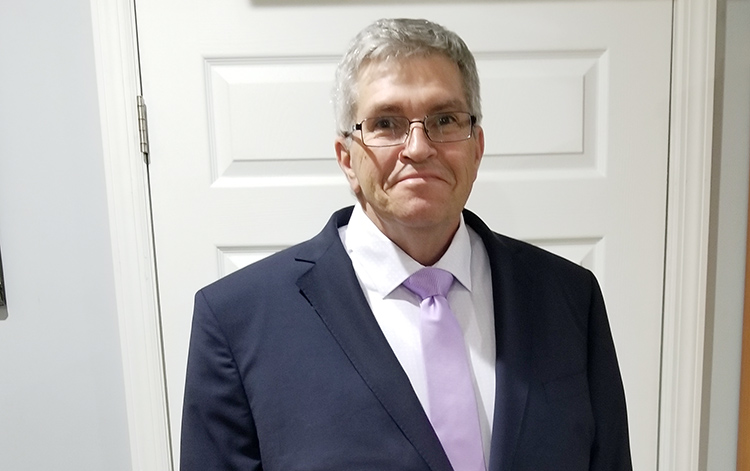 In October, 2016, I was lying in bed watching television, nothing in particular, when a show came on about breast cancer awareness in both men and women. It showed how men, as well as women, should also look and feel their chest. As I lay there, I started to feel my chest and noticed a lump over my left nipple. It wasn’t too large, but enough that I knew something was there. I mentioned it to my longtime partner who also felt it and said to have the primary care doctor check it next time I was there.

It was several months later that I was at the primary care doctor and mentioned the lump to him. He felt it and said he didn’t think it was anything to worry about but did give me the names of some breast surgeons to follow up with. He wasn’t very concerned so therefore, neither was I and I did not follow up.

I work for Hospice who often offer “In Services” for patient care and medical concerns. In July, 2017, they offered one about breast cancer in both men and women. During the presentation, I started to think about my lump again. Afterwards, I had the opportunity to speak with the nurse presenter and told her about my lump. She asked if I ever had a biopsy done of the lump and I said no, I hadn’t and repeated what my primary care doctor had told me. She became emphatic that I have a biopsy done telling me that it is not possible to tell for sure if a lump is cancerous or not just by feeling it.

The nurse presenter immediately set me up with a surgeon who did a small needle biopsy. A couple days later, the results came back that there was not enough tissue to determine if the lump was benign or not. We then scheduled a core biopsy, a breast sonogram and mammography. Everything was quickly done and on July 19th the results were back. I had breast cancer. An MRI was then scheduled and they also suggested genetic testing be done.

My husband (we had been married in May after a 17-year relationship) and I were not exactly pleased with the doctor I was currently working with. He wanted to operate as soon as it could be scheduled with disregard to my current warfarin medication. He suggested I stop the medication for five days and the surgery could be done. My cardiologist had told me many times over the years that I should never stop the warfarin.

My sister recommended that I see an breast cancer surgeon for a second opinion. My husband and I met with our new doctor. She was wonderful and very understanding and compassionate and we both felt very comfortable with her as my surgeon.

Waiting for the genetic testing to come back was a long emotional wait (generally about four weeks). The decision on whether to remove one breast or both would be dependent on the results of this genetic testing. When the testing came back, we met with the breast surgeon to go over the results and my options. I tested positive for Chek2 and an extra chromosome making me a higher risk for certain cancers, including breast. After a lengthy discussion, it was decided my best option would be to undergo a double mastectomy to avoid future risk, considering my genetic test results and family history.

On August 31, 2017, I had the surgery and both my breasts were removed. There were some complications due to the warfarin and I was in the hospital for a week rather than the three days expected. I am in the process of healing and am grateful that this cancer was found and I hope to educate others on the importance of male breast cancer.

I would like to stress the following:
• Men need to be proactive in checking their breasts.
• In the event a lump is discovered, do not let someone, even a doctor, discount it as not important enough to follow up. Get another opinion.
• If diagnosed with any kind of serious illness, find a doctor that you are comfortable with and who will listen to your concerns and help you through the surgery.
• Genetic testing is becoming very important in today’s medical world. It can help the doctor’s decide what is the best option for you as well as educate other family members on their own potential risks and their children’s risk.

Note: My genetic test came back positive for Chek2 gene and the extra chromosome. These combined put me at higher risk for breast cancer and other cancers. There is a 50% chance that my siblings would also check positive for this same gene. I have two sisters and one of them tested positive for the gene.
My knowledge and my testing may be what helps my sister to be more aware and careful in her own health care choices in the years to come.