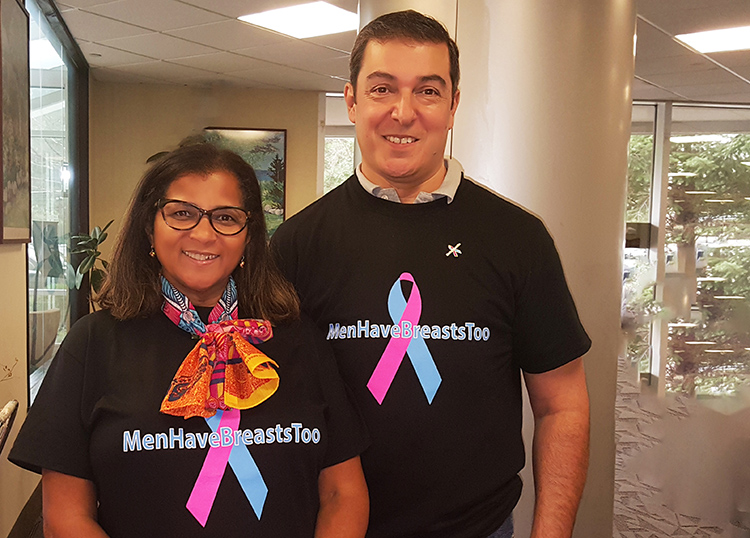 On January 5, 2017, I was on the phone speaking with my daughter when I felt a tug around my chest and stood up to stretch. Suddenly I felt a lump behind my right nipple, which I never noticed during my morning showers. The very next morning my wife, Xio, called our doctor and made an appointment. I saw the doctor a week a later on January 12, and he gave me a full physical and sent me to the local hospital for a mammogram the next morning. Friday the 13th will forever haunt me. Boy was that fun, not! I had no idea this is the torture women experience on an annual basis. Once it was over, and thank God it was, they told me I needed a biopsy. I was in a rush to get back to my office and did not want to wait around for insurance approval, so I told them to call me and I would return. By noon, they had approval and I was called back for the biopsy, where my wife joined me for my second round of torture. Little did I know I would have a “gentle” mammogram right after the biopsy.

I returned to work not thinking anything of it and the very next day my wife and I were on our way to join my parents in Florida for a week of fun in the sun. It was a three-day weekend, so I was told the results would be communicated to me on Tuesday. On Monday, January 16, I received my diagnosis after a call from our family doctor. There was no way to sugarcoat it, he said, “you have breast cancer”. I was just 49 years old. We sat around looking at each other with a collective feeling of shock. The doctor recommended three possible surgeons for me to see upon returning from vacation. One of them was Dr. Mark Gordon, an oncology surgeon who had treated my wife in the past for minor cysts. My wife immediately called his office and made an appointment for the following Monday. By the end of the day, I had a cancer patient navigator, and an appointment to see a genetics counselor. You see, my mother is a breast cancer survivor. I never did genetics testing because my sister tested negative, so I assumed it had skipped me. I was wrong!

I met with the genetics counselor first, and did my genetics test, then on to Dr. Gordon. He reviewed my pathology report and explained I had ductal carcinoma insitu. Dr. Gordon explained I needed surgery to remove the nipple and all the breast tissue, plus the layer of cells underneath and removal of sentinel lymph nodes (new vocabulary). Everything was moving fast. While waiting for the genetics results we made an appointment with my oncologist. She explained the possible treatment plan, chemo, radiation, and immunotherapy. I was diagnosed with triple positive, HER2 positive, Estrogen positive and Progesterone positive breast cancer. The genetics test confirmed I carried the BRACA-2 gene.

I had my surgery on Valentine’s Day, February 14, 2017. From mid-March until now, my treatment has consisted of chemo medications (Taxol, Adriamycin, Herceptin, and Perjeta to name a few), followed by radiation and now finishing my every three-week treatment of Herceptin and Perjeta. Tamoxifen has been added as a daily pill. I have a daughter who just turned 21 and will have her genetics test done as soon as possible to see if the BRACA-2 has been passed on to her.

Xio and I have made the decision to share my story with as many people we come across as possible in an effort to spread the word that men get breast cancer too. We have received amazing support from our respective employers, friends, and family, and cherish every little moment and milestones along the way. I just celebrated my 50th birthday on April 3 with my relatives and closest friends and it was truly a celebration of life.

Our journey is not over, right before my big birthday celebration, Xio was diagnosed with a rare but treatable breast cancer, Mucinous Carcinoma (about 1% of women are diagnosed with this type of cancer).  I finished my last infusion on April 24th, 2018, and she had her surgery in mid-May 2018. We are as prepared as two people can be to battle this dreaded disease. We joke we belong to the 1% club.

According to the American Cancer Society, about 2,550 new cases of invasive breast cancer in men will be diagnosed and many are not as lucky as me. For men, the lifetime risk of getting breast cancer is about 1 in 1,000. If you suspect something is wrong, in any part of your body, don’t ignore it and get it checked.

We have been honored to meet many fellow male breast cancer survivors and their families through organizations such as the Male Breast Cancer Coalition.  Since my diagnosis, we have had opportunities to participate in several events to raise awareness and will continue on that mission of awareness and advocacy.

Education and awareness are the key. Please share this information with your fathers, sons, uncles, brothers, cousins, grandfathers and every male in your lives (I do every chance I get). The fight against this disease can be won but it starts with spreading awareness. Men have breasts too!