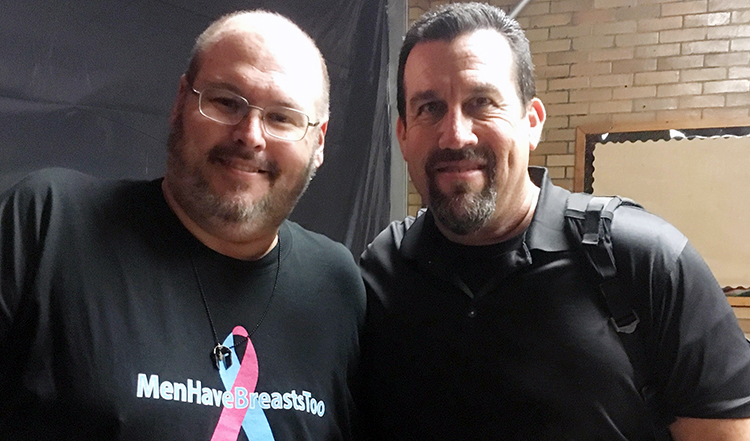 Diagnosis
Although I had an inverted nipple for a few years, it never gave me any pain or problems, and I did not have any discharge or skin changes associated with it. It was still reactive to cold and stimulation. In September, 2016, I was at a coroner’s conference and had a sharp stabbing pain in my left nipple and due to my family’s cardiac history, I went to the ER where I received a negative diagnosis. In December, by chance, I mentioned my inverted nipple to my nurse practitioner and she decided to order an ultrasound of my left breast. It was initially thought to be a simple gynecomastia, but since I had no pain other than that single event in September, the radiologist wanted a biopsy because he thought the lack of pain was suspicious.

After an ultrasound of my left breast, followed by a mammogram that same day, December 28, 2016, I left the breast care center with a preliminary diagnosis of gynecomastia. A few days later I received a call from my NP saying that the radiologist had updated her reading due to my lack of pain or tenderness in my left breast and suggested a biopsy to confirm diagnosis. I had a biopsy on January 5, 2017 and, three days later, I received notification that there was a new result in my online medical record, an addendum to my procedure note pathology that showed an invasive mammary carcinoma. I was immediately sick to my stomach. I was just 44-years-old.

After lots of Google searches, I decided that there was nothing I could do about my diagnosis and thankfully, due to my upbringing and the adversities my family has faced over the years, it was either face the challenge head on because there wasn’t anything you could do about it, or let it run your life But, to say I was not scared would be a major understatement. Fortunately, I also had the most amazing prayer support I could ask for and with my truest best friend in this world, I knew I could conquer this.

Although my family was in shock, they rallied around me and were amazingly supportive, as were my closest circle of friends. Thankfully, my sister was the nurse for my surgeon at the time of my diagnosis and we were able to maneuver through the system easily. I was also am an employee of 25 years at the hospital I was treated at, so I was well known to most of the staff. While there were a few hiccups, as there is with any facility, I was well taken care of by my family and my extended family at work.

Treatment
I was scheduled for a simple mastectomy, and during surgery my sentinel node was found to be firm by my surgeon so he had a frozen section done that was positive for cancer. He then decided to do a modified radical mastectomy, and removed all my axillary lymph nodes. I was surgically staged as 2B. I had clear margins but the post-op pathology was staged as 3A with 4 of 12 axillary nodes found to be positive. I was ER/PR positive and HER2 negative.

Two weeks post-op I had a PET scan that was negative. This was followed by 16 weeks of chemotherapy consisting of dose-dense AC therapy (Adriamycin and Cyclophosphamide) first, every 2 weeks for a total of 4 doses. This was followed by Taxol every two weeks for a total of four doses. After a four-week break to allow for rebound of my white blood cells and hemoglobin, I started a six-week regimen of radiation therapy, with 23 daily doses of IMRT therapy, followed by seven doses to specifically address my surgical scar line. I was started on Tamoxifen approximately four weeks after radiation, and I am on the recommended 10-year treatment plan.

Genetics
I tested BRCA negative, but asked for a second opinion and was sent to the Indiana University Hospital Simon Cancer Center to see one of the leading doctors who deals with male breast cancer in my region. He is a leader in genetics and genomics, as well as personalized therapy and a Vera Bradly Investigator. He agreed with my oncologist’s treatment plan, so I was released to my local cancer treatment center. Since he was one of 50 doctors who had been recently asked to participate in a global research study on male breast cancer, I was enrolled in the study as one of a small group of men from the IU center. I am also enrolled in a family study with my mom and my aunt being overseen by Mary-Claire King, the women who discovered the BRCA1 and BRCA2 genes. My mother is BRCA negative as was I, and she has never had breast cancer, but her sister has, and they have an aunt and first cousin who has also had breast cancer. We were therefore selected to be part of her newest study on familial connections.

Great Support
I have been in healthcare for 25 years, first as a technician until I returned to nursing school, and then as a nurse since July, 2017. There was some question as to possible work related exposure due to my time around radiology equipment, and because I worked as an EMT also for most of the 25 years, and was a firefighter in a volunteer department since 2001, where I worked as a hazardous materials technician. But there is no evidence that any of these added to my diagnosis.

Many friends and colleagues who supported me were amazed that I had been diagnosed with breast cancer since it is such a rare disease in men. This has given me an amazing opportunity to reach out and teach them about a journey which has forever changed me. I was so well supported and the complications with surgery and treatment were so minimal, I consider myself very, very lucky.

I believe education is the key. This disease is treatable, as long as it is not found too late. Because of the lack of education out there, I think that for every effort that is given to breast cancer in women, we need to spend four times that on male breast cancer to catch up with the rest of the breast cancer world.