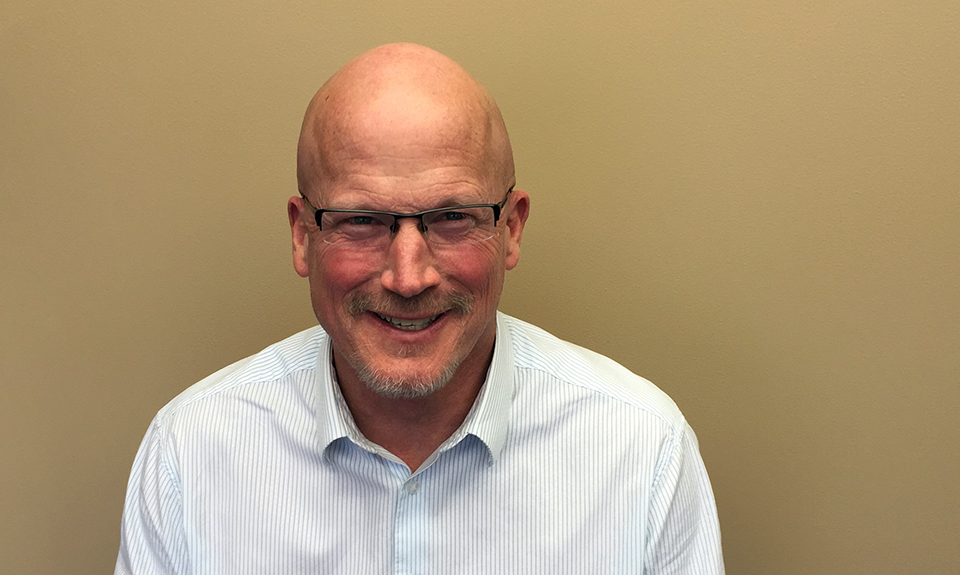 Ringing the silver bell proudly in the lobby of the Roger Maris Cancer Center in downtown Fargo was never something I saw myself doing.  My eyes filled with tears while being applauded by members of the staff, strangers and my wife Dawn.  Ringing the bell meant the end of my recent cancer treatment and the closing of a difficult chapter in my life.

At 51-years-old I found a lump in my right breast, just under the nipple while in the shower.  Since I didn’t have a similar lump on my left breast, I decided to call my doctor.  He suggested I go for a mammogram and I was diagnosed with gynecomastia.  The doctor told me he’d monitor me for any changes and I was sent on my way.

About a year later I noticed the same nipple was cracking, peeling and bleeding repeatedly, but never quite healing.  I made another trip back to the doctor who began treating me for dermatitis.

A few days later Dawn noticed my nipple was starting to invert a bit and she insisted I contact the Edith Sanford Breast Center near our home. I was able to get an appointment for the next day.

In January 2015 after two mammograms, two ultrasounds and a biopsy, I received a call at work.  I was on my way to lunch, heard the words, ” You have Stage II breast cancer” and dropped my plate!

Two weeks later I underwent a mastectomy and four lymph nodes were removed.  Groundhog Day will forever be a reminder of the day I lost my right breast.  In March I began 16 rounds of chemo over a 20 week span, followed by 25 rounds of radiation.

Although my body weathered the treatment fairly well, the strain put on me physically AND mentally was difficult.  I found my confidence destroyed. I only missed a few hours from work, but it took all my strength to get up and go to work every day.  Had it not been for the support of my wife, all the prayers and my amazing medical team, I don’t think I would have been this resilient.  Dawn calls me stubborn, but the truth is I was not going to let this diagnosis beat me.

Today I am a 53-year-old grandpa of five. Typically a private person, telling my story is something I hope will help others. I learned a lot about cancer, a lot about life and even more about myself.  While I wouldn’t wish this on anyone, it’s been an incredible journey.  In some ways, one I’m glad I got to experience.  If I can make just one man aware they need to be checked, then talking about my breast cancer is worth it.