I found a lump on my left nipple when we were on holiday and I was in bed when I noticed it. At first I just thought I had knocked it, as I was working as a builder at the time, so was used to getting bashed about a bit.

The lump started changing shape so I spoke to my wife, Tina, and arranged an appointment with my doctor.

My doctor didn’t give me any indication that I could have breast cancer, but I was referred to the breast clinic straight away.

About a week later, I had my appointment at the Cork University Hospital (CUH) where I had a mammogram and a biopsy that same day. The lump was rock hard and two inches in size, so the specialist I saw was alarmed.

I received my results the following week – I had breast cancer. I remember my consultant looking shocked, but we both wanted to get on with the treatment. I needed a mastectomy of the left breast, and the operation was booked in for a week later.

I was taken aback, I didn’t know men could get breast cancer. If I did, I certainly hadn’t paid any attention to it. I didn’t have any symptoms, or if I did, I didn’t know what they were at the time. I might have been a bit tired, but then again, the nature of my work makes me tired. I was forty-three-years old when I was diagnosed.

There is a history of breast cancer in my family – my sister has had the disease and my dad’s two nieces have also had it.

My wife was with me when I got my results, she didn’t know men could get breast cancer either.

My son, Dylan, was just seven years old at the time of my diagnosis. We told him that daddy was sick and explained that I would be having treatment, and wouldn’t be able to do all the things I could do before. When I lost my hair, my son called me ‘the egg’, and he still calls me that today!

As well as the mastectomy on my left breast, I also had full removal of the lymph nodes on the left side. I had chemotherapy every two weeks for seven months after the surgery, and 25 sessions of radiotherapy.

Losing my hair from the chemo wasn’t so bad, but the other side effects like the constant infections and being in pain was tough to deal with.

I am absolutely fine now. I finished my treatment in 2012 (athough I am on Tamoxifen for ten years) and started visiting Cork ARC Cancer Support House. It is a great place where you can receive therapies, massages, counselling as well as get involved in all sorts of other activities. I found the counselling particularly useful – it was really helpful to be able to speak to someone outside of my family. There was no judgement, and I felt relaxed and at ease. It was actually my counsellor who suggested I might enjoy Dragon Boat Racing.

Dragon Boat Racing has been proven to be good for breast cancer patients especially for people like me, who have lymphedema. Lymphedema is most commonly caused by the removal of or damage to your lymph nodes as a part of cancer treatment. It results from a blockage in your lymphatic system, which is part of your immune system. The blockage prevents lymph fluid from draining well, and the fluid buildup leads to swelling. Family members and friends can also be part of Dragon Boat teams, and my wife helps out when she can.

I went along to a Dragon Boat Racing open day at the end of 2012, and then shortly afterwards, I was part of a group of people who set up a team together. We put leaflets in hospitals and other places, and we now have around 60 people who are part of our team.

Dragon Boat Races are normally between 250-500 metre distances. We train twice a week in the boats from Spring to Autumn, and do other training like aqua aerobics, in the winter months.

I am always trying to spread the word that men get breast cancer too, and my motto is ‘if in doubt, check it out’.

Mark is working with UK breast cancer charity Walk the Walk on their Men Get Breast Cancer Too awareness campaign. 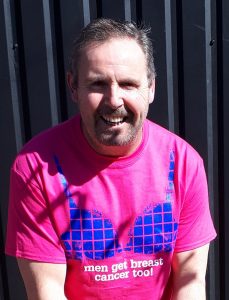 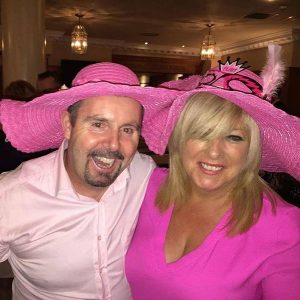 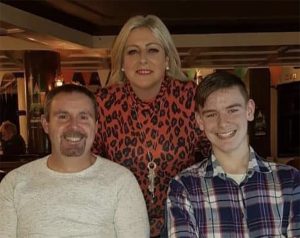 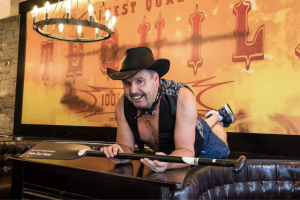 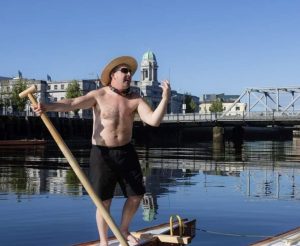 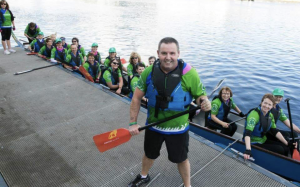 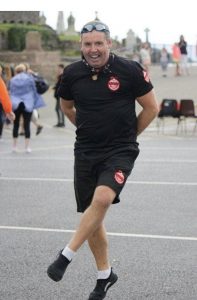