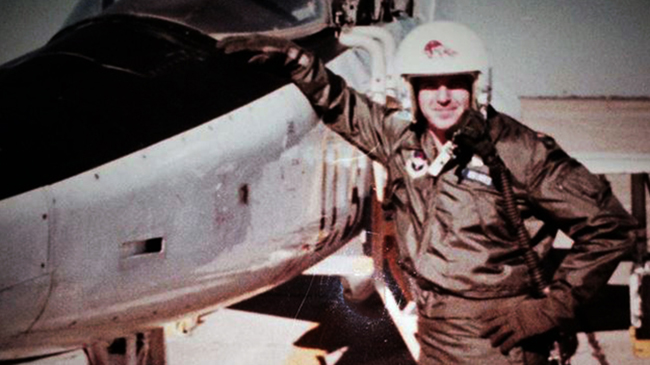 In March 2012 life was good. I had retired after 28 years in the Air Force as a Squadron Commander. At 56 years old I was enjoying my second career as an MD-11 pilot and instructor at Fedex, when my life came to a sudden stop.

My nipple was starting to invert and my wife Robin said I must go to our doctor immediately.  I wasn’t too worried because I have lumps all over my body and had been monitored by flight surgeons for years. The lumps were harmless fatty tumors, but this one was a little different and harder.  In retrospect, I actually first noticed a little pain while weight lifting about a year earlier, but ignored it.

My doctor took one look and told me he thought it was cancer and scheduled a mammogram for the next day.  I remember Robin and I looked at each other in disbelief. We both went into shock and were like zombies going through life.  Robin would cry at the drop of a hat and was just thinking I was going to die.

In addition to the mammogram, my doctor also scheduled an appointment with a surgeon because he wanted the lump out regardless. He had another male patient many years prior to me, so luckily he was knowledgeable about male breast cancer or I might not be here today.

My breast cancer was confirmed. I had a mastectomy and unfortunately it had spread to two of my lymph nodes. When the surgeon told us the cancer was in several lymph nodes, Robin broke down even more because she knew what that meant.  The pathology report said I had grade 3 stage 2B breast cancer. Grade three indicates an aggressive cancer.  Like the majority of men who get breast cancer, it was ER PR positive and HER2 negative. I did not test positive for a BRCA gene mutation.

I’ve done some research and approximately 25-30% of breast cancer patients will have a reoccurrence at some point regardless of grade and stage.  The longer you go cancer free regardless of stage and grade the better, but it doesn’t guarantee you won’t have a reoccurrence five or ten years down the road. It has nothing to do with winning a battle, but more to do with how your body responds to cancer cells, the aggressiveness of your cancer, the stage of cancer and response to treatment.

My oncologist recommended I get a second opinion and I did. I quickly learned treatment recommendations varied.  As a pilot I found this unsettling because pilots are trained to respond to life threating situations with a plan we all follow. However, cancer treatment has no guarantees and every patient responds differently.

Standard of care is based on current peer reviewed studies, but it takes years to complete studies. With radiation there are some gray areas where they don’t know if it helps or hurts. I fell into the gray area.

After months of treatment I was crowned cancer free. I won the battle and was happy to get back to flying. My joy would only last 18 months though. I got a call from my MD and he said my PSA was normal, but raising very quickly. Unfortunately, a biopsy came back positive for prostate cancer, very little cancer and normal grade. I was given the option to wait and see, but given my history I wanted it out.

We went to MD Anderson to have Proton Therapy. This was much easier than my breast cancer treatment. We called my treatment “radiation vacation” because we got to spend six weeks in Houston next to a golf course, visited the Houston zoo and took day trips to the ocean.  Again, I was declared cancer free.

In October 2014 my Memphis Oncologist noticed the tumor marker was increasing. He ordered a scan and it showed cancer had spread to my lower back. I had a biopsy to determine if it was breast or prostate cancer. We are lucky to have one of the top oncologists for breast cancer in Memphis and his clinic works with MD Anderson, plus he encourages second opinions.  We met with the top male breast cancer specialist at MD Anderson. She had seen six men with breast cancer that day.

Recently I was at MD Anderson for a specialized radiation on my spine tumor, which may put me into what they call NED (no evidence of disease).  Once you have Stage IV breast cancer you never get to hear the word cure again. The breast cancer becomes resistant to treatment and begins to spread again. It can be two months to a couple of years.  (I’ll write more on this experience in another post.)

One of the things we’ve learned on this journey, is less than 3% of all funds go towards treating Stage IV cancer research for both men and women. Zero percent goes towards research for male breast cancer.

Here are some other things that are very important to me. These are some of the reasons I feel it’s important for me to share my story.

– Educating and understanding your pathology report is important.

– Early detection is not a cure all for everyone.

– Clinical study treatments are extending the life of women, but most are excluding men from many of these trials.

– I  want to educate people about the lack of research funds for all Stage IV cancers, including male breast cancer.

– People need to know the truth about survival rates for people with Stage IV breast cancer.

– It’s disappointing to learn that we have not improved the death rate of breast cancer in twenty years.

I am very fortunate to have one of the best medical teams working together. I am invigorated by the clinical trials for vaccines that may prevent early stage breast cancer from spreading and immunotherapy and targeted drugs that may be able to cure breast cancer someday.

We must advocate for men to be included in clinical trials because these therapies could prevent future re-occurrence and possible cure or delay the progression of advanced breast cancer. We need to advocate for at least 1% of funding to be directed toward male breast cancer research.  Giving the right treatment to the right person will be the future of breast cancer.

There’s so much more to share and I will.