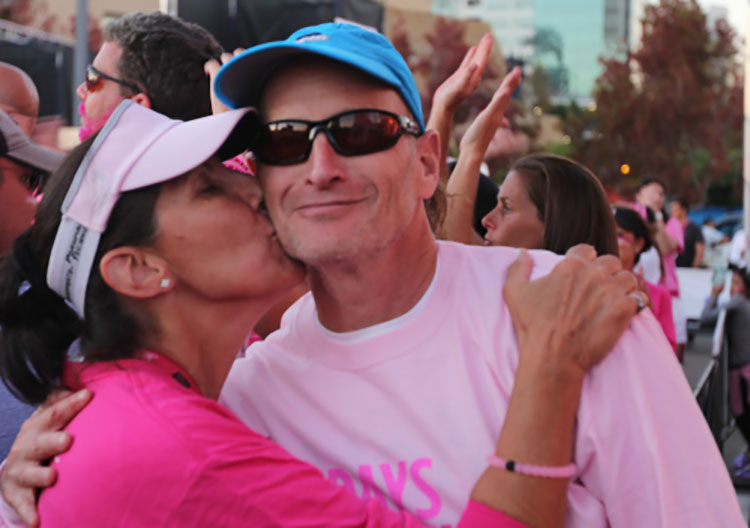 My story began in 2005 with those life-changing words. At the relatively young age of 48, I was told that I had breast cancer.  As a man who has always taken good care of myself, this was a shock.  I have always been physically active, eaten well, maintained a healthy weight, and never smoked.  Little did I know that while these attributes would be my friend in fighting this disease, they don’t necessarily prevent it.

For months, I ignored the lump I felt in my breast.  I thought it was nothing more than a cyst.  But when it became painful, I finally decided to have it checked.  I can vividly remember the look on the surgeon’s face when he felt it.  I knew I was in trouble.  The diagnosis was Stage II breast cancer.  Within a month, I had a mastectomy of my left breast and 17 lymph nodes removed.  Like a woman with a similar diagnosis, I endured eight rounds of chemo followed by 35 doses of radiation, and then five years of Tamoxifen.

After completing chemo and radiation, I wanted to put breast cancer in the rear view mirror.  My inclination was to look at it like having the flu: You get sick, you get better, no more discussion.  After all, it’s not the most macho thing for a man to have what so many still consider a “woman’s disease.”  But my family urged me to help raise awareness about the risks men also face.  So just six months out of treatment, my children and I decided to participate in the Susan G. Komen 3-Day 60 Mile Walk.  We wanted to do our small part to help raise awareness.  We named our family team, “Breast Man Walking” with the tag line “Male breast cancer – Rare but Real!”  We have walked every year since raising more than $400,000 to help find a cure.

Having three children, I decided to have genetic testing to see if I carried the BRCA gene mutation. Being of Ashkenazi Jewish descent and a man with breast cancer, my odds were higher. As it turned out I tested positive for the BRCA1 mutation. The decision then became up to each of our three children as to whether they wanted to be tested.  It’s not an easy decision and one they each approached in their own way.  Our oldest daughter, Pamela, was the first to be tested.  She was 25 when she learned that she also inherited the faulty gene.  For Pam, this meant being diligent in getting clinical breast exams, yearly mammograms and breast ultra sounds.

Our other daughter, Annie, and son, Jay, who were 22 and 19 respectively did not want to be tested at the time.  But when Pam was diagnosed with DCIS at the age of 28, they realized their risk was very real.  Annie did not inherit the BRCA mutation, but our son did.  He’s had a very hard time dealing with this reality.  Even though as a male his risk for breast cancer is statistically small, he has seen his father and his young sister defy statistics.  There has been no clear protocol for you men who carry BRCA mutations, so Jay sometimes feels anxious.

Pamela’s diagnosis of early stage breast cancer and the BRCA gene mutation prompted her to have a bilateral mastectomy.  Fortunately she did not require any further treatments.  Though just this past year, she opted to have her ovaries and Fallopian tubes removed at the recommendations of her doctors.  We are blessed that she has one daughter.

Needless to say, our family has been through a lot.  But things can always be worse. Three years ago it did get worse.  I had a recurrence.  I had a nagging cough and noticed that my stamina wasn’t up to par.  After seeing the doctor, I was told I had bronchitis and was prescribed antibiotics.  There was no improvement.  A chest x-ray looked normal, so I was given another round of antibiotics.  Finally, at the urging of my wife, we went to a pulmonary doctor who ordered a CT scan of my chest.  The scan showed spots on my lungs, liver and bones. The breast cancer had metastasized.

After visiting several doctors, we found a clinical trial about two hours from home.  It was a Phase II randomized blind study trial that was evaluating the efficacy of a PARP inhibitor.  The trial was specifically designed for BRCA and metastatic breast cancer.  And fortunately it accepted men.  Many others did not.

I was treated every three weeks with two standard chemo regimens and possibly the trial drug.  After 14 rounds, I experienced an allergic reaction and needed to go off the study.  But the results were remarkable!  The scans showed no cancer in any of the areas from before.

Following the trial, I was given monthly injection of Faslodex until this latest scan revealed new cancer in my lungs, hips and spine.  I am again in a clinical trial being given the same PARP inhibitor used in the first trial.  So far I’m having some difficulty tolerating the drug, but hope I can continue as it has shown great promise.

As a Stage IV patient, I will remain in some kind of treatment for the rest of my life.  We know it is incurable but it is treatable. When I faced the recurrence I was told the average life expectancy is 26 months.  I am still here and fighting three years later!