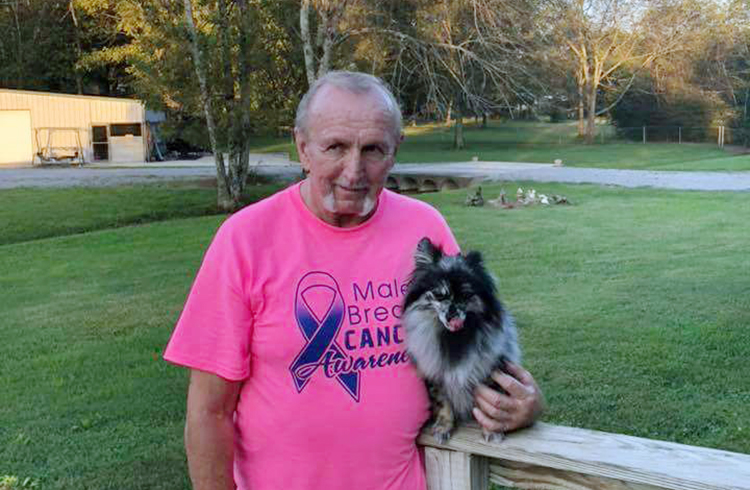 I was a Shelbyville firefighter back in 1973, and as far as I know, there wasn’t any kind of breathing apparatus. When I came back in 1986 they had some on their trucks, but we didn’t use them, and then with all the new plastics and the new synthetic materials and stuff coming out, I think I was one of the first ones who started using that breathing apparatus because I didn’t want all that stuff in my lungs. Out of it, they say I’ve got a touch of Chronic Obstructive Pulmonary Disease. I don’t know if that’s come from the fire department or what, you know I never smoked. I worked there of a total of 33 years as a firefighter, a driver and a captain, but the captain still had to fight fire
Breast Cancer
I found it around September 2016. I was out weed eating and mowing the grass. I don’t wear a shirt or t-shirt, and I wiped my chest off, because I was sweaty. I felt something and tried to wipe it off, but I looked down and there was a little knot, about the size of the end of your little finger.

Well, just so happens I had a yearly physical with my doctor at that time, and I went to see her. My blood and everything checked out fine, and she said, “you’re in good shape.” Then I told her about the knot. She seemed to think it was an ingrown hair, but I didn’t agree. I went to a nurse practitioner, Maria Thomas in Shelbyville, and I talked to her about it. She saw it, and she said, “I think we need to go a little further, I’m not trying to scare you, but this is the way breast cancer starts out”.

I heard that was a good breast cancer doctor, Dr. James ‘Jimmy’ Carter, and she made an appointment with him to do the biopsy  which showed I had breast cancer. I happened to have a toothpick knife with me, and I just laid that on my stomach as a joke. I joked, “well there’s a knife, you’re a doctor, just cut it out.” He said, “it’ll take me a little while to get people here, “there’s more to it than that.” So, we talked about it, and we set up an appointment, and he said, “I don’t know what we’re gonna find until we get in there.” And I just told him, “you do whatever you gotta do.” He sent me for a CAT Scan, and they also did a 3D Mammogram and an ultrasound. Every scan they did showed something.

Despite going on vacation the following week, the doctor postponed it a day and performed a mastectomy on my left breast.

I’ve really been lucky; I thought I was going to die. They gave me aggressive chemo, which meant I lost my hair, but also my fingernails came off, my toenails came off, and it destroyed my top teeth; they started breaking off like chalk. They couldn’t pull them out, they had to cut them out. It didn’t affect my bottom ones.

My mom had ovarian cancer in 1955, and they gave her three months to live. At this time, my dad got where he couldn’t talk, and the nose, ear, and throat specialist sent him straight to Vanderbilt, where they took his voice box out; it was throat cancer.

I retired 2011 and was diagnosed with breast cancer in 2016. They didn’t link it to my family, and I didn’t ask about the cause at this time because I didn’t hear any reports about firefighters having cancer. But in the last year, I’ve heard a lot about firemen with cancer; prostate cancer and lung cancer have been linked to firefighters.

When they tell you that you’ve got cancer, it just takes the air out of the room!  I wasn’t into thinking about how I got it, I just went into the survival mode, and all I thought was, I’ve got to beat this, and go from there. My surgeon had completed thousands of mastectomies on women, but I was only his third man. I’m on Tamoxifen and I have an annual mammogram.

I still haven’t met a man with breast cancer, but due to seeing all the men on the male Breast Cancer Coalition (MBCC) website, I felt that I was in a family because these guys from all over the world, Australia and everywhere, had breast cancer. I had a t-shirt made that says: “I’m Larry Overcast, and I have breast cancer,” and it’s pink. I’m having some t-shirts made now that have a blue ribbon on it, blue and pink, it’s a pink shirt, but it’s got the blue ribbon on the front.

That’s where I’m at; I see a guy, you know, we talk and when they get talking and stuff, somewhere or other cancer comes up. And I tell everybody I have breast cancer; I had breast cancer, and they look at me, and I say, “you need to go have a mammogram.” “I’m a man, we don’t…” that’s what I’m trying to tell you, the public needs to know that men get breast cancer too and they need to have a mammogram. 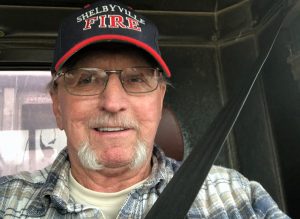 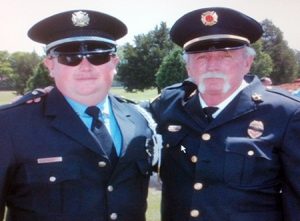