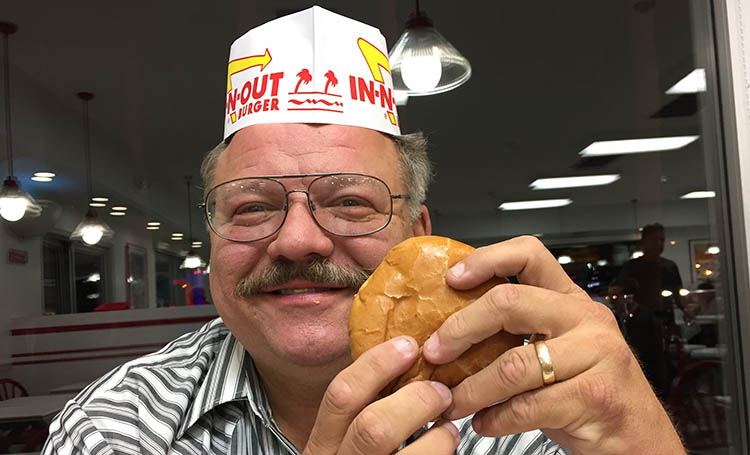 Breast cancer saved my life. If it were not for the pre-tests, who knows what could have happened to me?

It’s amazing what you reflect on after going through this. In my early 20’s I worked in a funeral home. I remember a distinct odor from people who had passed away from cancer. About three or so years before my breast cancer diagnosis I started noticing some swollen glands under my left arm and more than usual perspiration. It was the same odor. The same one I used to smell at the funeral home. I remember telling my father and wife about having the smell.

Then in March 2012 I had a cold and was coughing. I found a lump and knew it was cancer. I just knew. I sat up in bed, said a prayer, and then woke up my wife. “Honey, I think I have lumps in my breasts.” She looked at me and said, “Yes you have breast cancer and I have prostate cancer!” After 29 years of marriage, we’ve always maintained a sense of humor.

Because I’m a veteran, I went to a nearby VA Hospital in Washington, DC. When I first met my surgeon Dr. Rebecca Evangelista, I told her I was going to be “Evangelized.” She is a fantastically beautiful person inside and out. She told me,  “Unfortunately we don’t have an area set up to handle men, so we’ll have to treat you in the women’s center.” She was somewhat apologetic. The sad thing about it was the sign even read “Woman’s Health Center,” or something like that. I wanted it out, just out. I didn’t care. I would have gone to a gynecologist. What the words said on the door didn’t matter to me.

During the pre-tests to prepare for my mastectomy there was a problem with the EKG. I had three blocked arteries, the “widow maker” and two small ones, and needed open heart surgery. Because of the imminent danger of the breast cancer spreading, the mastectomy had to be first. Otherwise it would have been a minimum two-year wait after open-heart surgery to have the mastectomy.

On May 16, 2012 I had surgery to remove my left breast along with some lymph nodes. By 9:30 the next morning I was released to go home. Stage 2 breast cancer and it did not spread. I was given Tamoxifen, but it drove my already elevated triglycerides to industrial strength, so the doctors took me off after two months.

In August I went back to the VA Hospital for my open-heart surgery, but the procedure was delayed because of my triglyceride numbers. My thoracic surgeon Dr. Alexander said, “We don’t think you can survive with triglycerides over 8100.” With such a high level, the grafts wouldn’t hold. He was same doctor who operated on former Vice President Dick Cheney, so felt like I was in pretty good hands. I spent about 30 days in the hospital before the operation. I had an enlarged heart and Dr. Alexander said my heart was double the size of a 600-pound gorilla’s heart. I was told everyone got quiet when they opened me up and that no one had ever seen a heart that size. There was an enormous amount of unplanned bleeding during the open heart because of mastectomy. After nine and a half hours of surgery, Dr. Alexander sat in my room for four more hours and monitored me.

When I went into operating room, I remember having a big smile on my face when they put me on the table, stripped naked like a newborn baby with 25 people standing around me. I thought, “I’m in the best position ever in my life.” If I die, it will be god’s will. If I live, I’ll have a service to do. I want to do something productive. A mission. A friend had asked me four years prior to my surgeries what my mission in life was? That question had really always confounded me. I could never really find an answer until that moment on the table. My dream is to do something positive.

A few weeks after I was released from the hospital after my open-heart surgery, I was sitting in my friend’s restaurant and told his 17-year-old son Enzo what I’d been through. I mentioned TroggBall to Enzo and he said, “Why don’t you do it?” I gave it some thought.

TroggBall, this little game and the prospects of what it can do.

The name evokes childhood memories. I was a creative kid. An artist since I was five years old. Growing up, there weren’t a lot of pizza places in my neighborhood. Instead, Friday nights in my house were about Chef Boyardee pizzas and watching TV with friends in my room. Back when I was kid, it was unusual to have a TV in your room. My friends would come over, we’d set our pizza down on the floor between two beanbag chairs, and start playing games we’d make up. Then there was my favorite horror flick. Trog was the name of a 1970 movie with Joan Crawford and there was even a hit song “Troglodyte.”

Fast-forward about 40 years to when I played paper football in my office.  At the time I worked for the federal government. I took a piece of paper, made a target on the wall and would see if I could hit the target. It wasn’t round or a football, but flat and more like something a “Trog” person would use. My imagination at work.

When I went back to talk with Enzo about TroggBall a few weeks later, I told him, “The only way I’ll do it is if you’re my partner! And, the only way we were going to market TroggBall is we must raise awareness of male breast cancer.”

During the development of TroggBall I played with my nephew and saw so many different ways it can be used. Within an hour he played 20 different games. Last year a friend with two kids who have learning disabilities started using TroggBall. It was amazing to see kids learning. We teaching by doing and I’d like to take TroggBall into classrooms and have a real purpose. I love the thought of kids and adults playing TroggBall and learning something while having fun. The toys gotta be something better and it will always be used in ways we never thought of. I want to encourage kids to play and be creative.

In between getting TroggBall off the ground, I’ve always made sure to go for my mammogram and exams every six months. I do self exams frequently, maybe even daily. I’ve become so aware of my body. Even the slightest pimple raises some concern. Everything is amplified, but that’s OK.

Back in April I was preparing for a simple plastic surgery to have some skin tags removed. During the exam before my surgery, some nodules were discovered in my lungs. Additional tests were ordered, including a second and even third X-ray, followed by a CT scan, then a PET scan. There was blood work and six biopsies of the nodes in my lungs. My breast cancer was in fact metastatic. In addition to my lymph nodes, the cancer is now in both of my lungs and in my spine (L3-4 vertebra), the same area where I had back surgery in April 1997.

I had a port placed in my right chest and started chemotherapy infusion treatments. I’m scheduled for 12 weeks of treatments plus a steroid to prevent allergic reactions. Right now I’m at the halfway mark. My hair started coming out, so I decided to shave my head and moustache.

Due to the cancer in my bones the doctor has recommended Fosamax for bone density to help strengthen my bones. Because a possible side effect of the Fosamax is necrosis of the jawbone, which can lead to jaw replacement surgery, I recently had a dental exam. I remain undecided if I want to continue taking the Fosamax.

Initially, I did not have genetic testing. I have a sister and son, so I knew I had to follow up on the tests. This year I was tested and I’m negative for any BRCA mutation. So where did my breast cancer come from?

Breast cancer was a pivotal turning point in my life. It changed everything. That can be true for men AND women. From the moment I found out I had breast cancer, I knew I had to be able to do some good.

My wife MaryAnn and I met at a 4-H speaking event. We both had done speaking engagements and won awards. I’m not afraid to get up and speak. It’s so rewarding to share a story that can have an impact and potentially save someone’s life. That’s my intention. I feel passionate about what the Male Breast Cancer Coalition is doing to bring awareness to male breast cancer.

I don’t want people to think I’m using breast cancer awareness to sell TroggBall. It’s the exact opposite. I’m using TroggBall to bring the subject of male breast cancer to the forefront. TroggBall gives me the opportunity to tell my breast cancer story and bring awareness. I absolutely love it when someone asks me about my scar. It opens a door and I get a chance to tell people about male breast cancer. Every day I hear, “I had no idea men got breast cancer.” If you can make a difference in someone’s life, wow, I mean wow!

My focus is on awareness and how breast cancer can affect men. Maybe the lady of the house will become aware too. There may be no family history, but she could have a father, son, and best friend. If she’s educated, she can help spread word.

Since launching a Kickstarter campaign for TroggBall, the phone has not stopped ringing. People want to hear my story. I’m 55 now, had a somewhat political life and even ran for local magistrate. I’m an artist and veteran with a small disability pension from the VA. I’ve been through multiple surgeries and am a part-time actor. My most important role right now is to bring awareness to male breast cancer. Whether it’s through TroggBall tournaments in bars around the country while educating people about male breast cancer or connecting with people in my local town, I envision making a difference.

TroggBall is the ultimate game of imagination. Had it not been for my mastectomy, I can’t imagine what could have happened to me. Right now I plan on doing a lot of living. That sentence has taken on a new meaning given the latest news in my life.