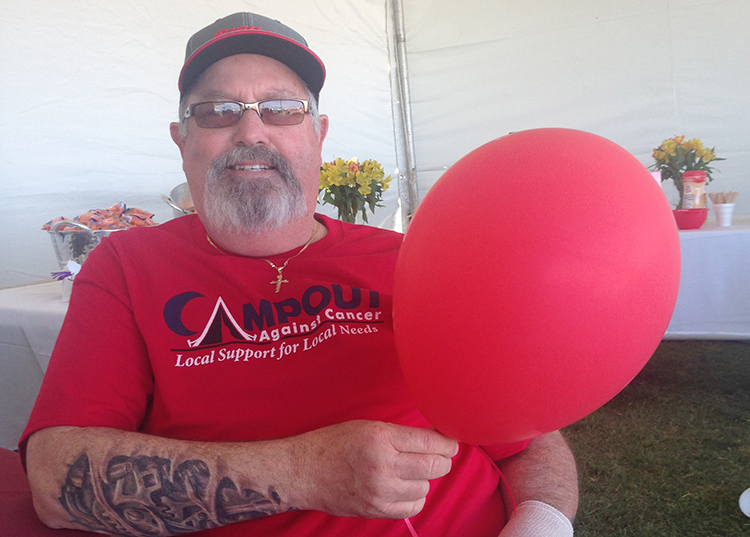 Two weeks before I felt my first lump I had gotten a new tattoo. The doctor told me the ink from the tattoo went to the tumor and pissed off the tumor causing the pain. I guess you can say my tattoo saved my life.

On November 14, 2013, I woke up at 2:00am with a pain in my armpit. When I rubbed the area I felt a marble. I told my wife Jackie and the next day we went to see the doctor. He was busy and I was sent to his assistant, a woman.  She examined me and noticed the marble sized lump.  She didn’t like what she was feeling and suggested I go for a needle biopsy the same day.  The results came back inconclusive and so did the follow up ultrasound.

When I returned to the doctor, he sat me down and told tell me I had breast cancer.  The pathology report was Stage 3 non-aggressive slow growing breast cancer. I thought how could this be? They couldn’t tell me when it had been stage one. A year before this time though my nipple itched and I ignored it. I guess that could have been one of the first signs a man might have breast cancer and ignore. Almost a year to the day, I had lost my dad to cancer esophageal cancer. My grandfather on my mom’s side also died from esophageal cancer. Plus, I lost my aunt to uterine and ovarian cancer.  I lost it, I was scared. I asked how serious this was and what the next steps would be.

The doctor sent me to the oncologist, Dr. Patel who was the founder of the Comprehensive Blood and Cancer Center which is affiliated with the UCLA School of Medicine.  He is truly the best of the best and I was lucky enough to have him as my doctor.  Dr. Patel confirmed I had breast cancer and needed a mastectomy.

Within a few days I was in the hospital being prepped for surgery.  I still remember the nurse coming in before my surgery, sitting down beside me to take all of my information and my vitals.  As she was entering all my information in her computer, she asked me what kind of cancer I had.  I told her I had breast cancer and she started to laugh.  She said, “Come on I’m being serious, I need to know what kind of cancer you have.”  Again I told her, “I have breast cancer.” It was right about then my surgeon walked in and I guess he could see the expression on my face and asked what was going on so I told him.  He then asked the nurse if he could see her outside the room for a moment.  My surgeon Dr. Irani returned, but the nurse didn’t. This was a schooled professional with on the job experience who obviously did not know men could get breast cancer.

I had the mastectomy and 14 lymph nodes removed, four of them were cancer. I was released the next day and went home with a drain. The drain stayed in place for about seven days.  During this time I went for my check ups and was healing and before long I started my chemo treatments.

Chemo was one day every three weeks. I was unable to work. I have no idea how people say they can work through chemo.  I was in a different frame of mind, I was confused, lost the ability to carry on a conversation, lost my taste buds, didn’t want visitors, couldn’t drive a car and was scared to even go get the mail.  There was a port in my chest for chemo and to drain blood. I swear it was all because they were giving me female hormones since they just don’t know any other way to treat men with this disease.

About day number 18, and this was the most memorable part of all of this, I started feeling more like myseIf. I was feeling more confident.  Day 19, I was able to drive again. Day 20, oh man, I was back to feeling like myself again. Then came day 21 and it was time to get back into the chair again for this medicine and all those feelings started again. I was also getting Neupogen shots to combat the low white blood cell count which had taken a dump because of the chemo. I was becoming very familiar with all of the people at the cancer center and at one point had visited 28 days straight.

In the meantime, I looked in the mirror, had no hair whatsoever, no arm hair, no leg hair, no eyebrows, I no longer looked the same.  I had no taste buds and no longer felt the same because of all this crap they were putting in me.  I didn’t allow anyone to come visit me.

All the rounds of chemo scared the hell out of me. I have a gun safe here with guns and my checkbook’s in there too. I was writing checks and ran out, so I asked Jackie to get me some more. My mind was altered at that time.  I didn’t like it. I was depressed. I never used the word suicide, but I could see why people going through what I was dealing with would think about it. I never told Jackie.  I was too scared to do anything anyway. I’ve heard about people not wanting to go through this and I get that. The physical part I could handle, but the mind altering was terrible.

Next came the radiation.  I was only the second male breast cancer patient they had treated at CBCC.  I wondered how they knew how much radiation to give me. I no longer had breast tissue because they removed it. The radiation burned right out my back. I had 33 rounds of radiation.

At my nine-month check up everything was good. Three days later I found a lump on my other breast. No surgery, but I was put on Tamoxifen twice a day for seven years. I sure do hope the seven years goes by fast.

My bones all started achin’ here a while back.  I was sent for a bone density test. I’m a 54-year-old man and they told me my bones are equal to that of 70-year-old women.  I repeated that back and said, “A 70 year old man?” And they said, “No, a 70 year old woman.”  That’s all from the chemo and drugs, but again how do I know if it’s not from the hormones?

After a recent PET scan and check up, I was told my tumor markers were all good. BUT, I was asked when I had broken my back? The area between my seventh and eighth vertebra was crushed. I managed to fracture my back when I moved some furniture, but I had no idea.

At the urging of my two daughters I did genetic testing and am negative for the mutation. The support I received from my co-workers has been wonderful and although my workload has decreased I am still working. I mentor cancer patients supporting them through their journeys. I truly believe I was given this disease to do exactly what I am doing now, helping others. Cancer is beatable. People think cancer is a death sentence but you can beat it.

When I go for mammograms, the letterhead is pink, the cup with the pens is pink, the balloons are pink.  While I’m okay with so many things being highlighted with pink, I want to know why we can’t get a little blue in there. I’m a mechanic, I am a man’s man and I don’t want another man to feel embarrassed by having breast cancer.