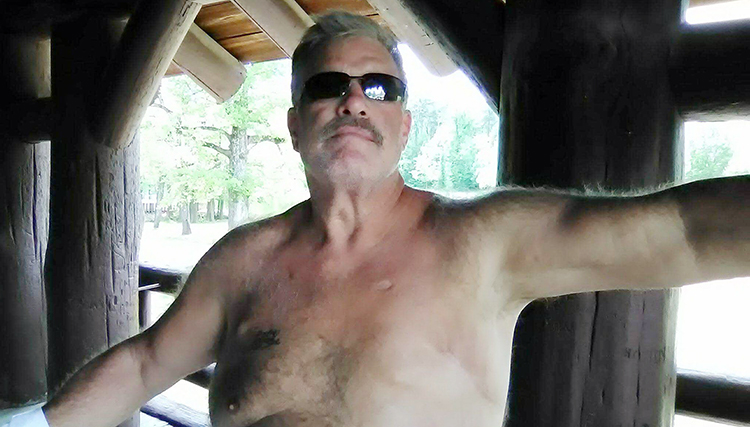 My name is David K. Skelton, and I’m from Senath, a small farming town in the boot-heel of Missouri. I was married to Stacey and have two sons Ryan and Patrick.

The reason I’m telling this story is because it doesn’t matter how invincible a person might think they are, there is always something that will humble you.
I was an elementary teacher at our local city schools and my wife was a traveling obstetrics nurse. When our youngest child graduated high school and found his niche, I retired and went on the road traveling with Stacey. We travelled all over the United States due to the nature of her job. While on one of her assignments, she noticed a pea-sized lump on my left breast. But, being a tough guy, I merely shrugged it off, since I didn’t have time to be going to the doctor then.

Anyway, we kept going from state to state for a year or more and so I put the knot thingy on the back burner.  When we were home, Stacey told me I needed to get it checked out, but I kept playing it off as an old injury. By this time, we were getting ready to head for Denver, where Stacey had a 13-week assignment.

After our Denver trip, we headed home where I started to notice my left nipple area was sore. I continued to say or do nothing about it, and it was soon time to travel to York, Maine, 1,700 miles away. Once there, it was basically same routine, except that I had to leave about five weeks earlier than Stacey’s contract expired because of the RV campgrounds closing for winter. On the way home, I told myself the first thing I was going to do was get this knot checked out, because it had already inverted my nipple.

It was the end of October 2016, when I made an appointment with my family practitioner, Dr Jain. When I took my shirt off, he got all flustered and kind of gruffly said you’ve got to go to Jonesboro to get a mammogram and a biopsy. I was freaked out, but I went and did what was needed, and around November 3rd I was told that I had male breast cancer, at age 53. Huh, you mean men can get breast cancer? I don’t really know if I comprehended what I’d just been told. I was diagnosed Stage III and I just thought, is this shit going to kill me, because it has so many already. I was a mess until I started reading about the disease and trying to understand how to live with it.

After the diagnosis, we get word that my wife’s mother is dying. My wife’s mom dies, I could possibly die, it wasn’t a very good time in our 30-year marriage, in fact the worst years ever. During this time, my wife decides she can’t deal with staying with me through the cancer treatments, so we divorce in 2017.

I was originally supposed to have surgery, but I chose to do chemo first, and did 24 rounds. I lost all my body hair, but being somewhat hairy, I thought the change felt good! Getting nauseous wasn’t a problem after the first treatment, since I was given Clariton, which I took before each chemo treatment.

After chemo, I had the mastectomy, and this healed nicely. I went back for some reconstructive surgery, and that really made me feel much better. Things were moving along like clockwork. I never missed an appointment, nor was I ever late for one. I wanted to get through this as quickly as possible.

After a couple weeks to heal, my date with the radiation oncologist came up, and I started the 35 radiation treatments. I drove the 90-mile round trip, five days a week for seven weeks to get the treatments. At first, they were nothing, but about week five, signs of burning were showing. The last eight treatments really deliver a punch, and I was burnt like I’d been in a fire. I was so glad when the nurse said I was done with the treatments.

So, from the day I was diagnosed with Ductile Carcinoma, it was a little over a year of treatments. I’ve had one PET-scan, in January 2018, and there is no sign of cancer in my body. I thank my loving, supportive parents, and my team of doctors and nurses from Jonesboro, including Dr. Cook (surgeon),