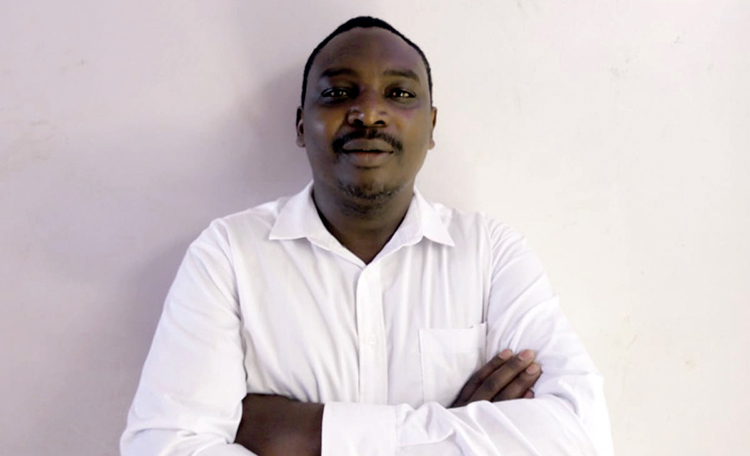 Lump started to slowly enlarge
I noticed a painless lump on my right breast early in 2004, but I ignored it for almost two years, thinking it was a normal growth like in an adolescent stage. It never occurred to me that it would be breast cancer, not just as a man but with our family history. As far as I knew, breast cancer only affected some women far away.

Months later, the lump started to enlarge slowly. By 2007, it started becoming a bit alarming because it had grown from milimetres to centimetres. By that time, it had started affecting the skin around my chest; the skin was turning brown, and I was scared. I then shared this with a close friend, who I borrowed money from for a medical check-up.

My father spent his pension for my treatment
Without informing any of my family, I decided to visit a doctor when I started learning that whenever I lifted something heavy, I felt some pain. After carrying out tests, doctors were very reluctant to admit that, at the age of 28, I had the signs and symptoms of breast cancer. They consulted widely and it took almost three months until they concluded that I had breast cancer, which was stage one, almost stage 2. This was shocking news, not just to me but to my father, and entire family.

I was in shock for several months. But the devastating news was the cost of treatment and drugs. I was traumatized wondering if my family could afford to save my life. I knew chemotherapy sessions were expensive, and only rich people could afford them. I thank God, my father used almost all his savings to get the lump removed and they treated me at Agha Khan Hospital in Nairobi.

Top secret within the family
At the time, as a family, we decided to remain silent about my condition, and it has remained top secret in the family. Luckily enough, I was, and still am, full of hope, determination and positivity.

The big puzzle is, no one in my family or relatives has ever had breast cancer. But, looking back, my uncle died of prostate cancer, and a cousin had died of cancer a long time ago. We wondered where this cancer had come from at my young age!

Until today I have been visiting the doctors, and I want to thank friends and our local church for assisting me meet some of the expenses for sessions and medication. But it has been long journey and a burden going back to hospitals, and meeting new friends who are in stages 3 and 4 of other cancers. It has been abnormal losing friends, and sometimes I think I am next.

Not easy to accept
Whereas I feel I am 90% off the hook, accepting that I am breast cancer victim is a tall order! I remember breaking the news to my wife was tragic indeed. How would she see me! Will she accept somebody who may be going to die soon? I thank God she accepted me the way I was. My mother once told my son that I must keep taking the drugs because, if I stop, I will die. My son was traumatized to this day.

However, my wife and family has been very supportive through all the hardships. What has saved my life, for sure, was being diagnosed at an early stage when they stopped the disease progressing.

My personal journey has been scary. Seeing friends die is the most painful, not just because you are a victim too, but because you think other people are worrying about you. With my experiences, I have decided to join with other friends and hospitals to create awareness about men and breast cancer. My story has also inspired my friends, and together we are creating awareness about the breast cancer in men. Our mission now is to reach out to other men and encourage them to go for screening at an earlier stage, because that is what saved my life. I know it’s not easy for a man with breast cancer to go public about it, but we are out there, step by step, sharing our stories with other men, and supporting them as they go through treatment.