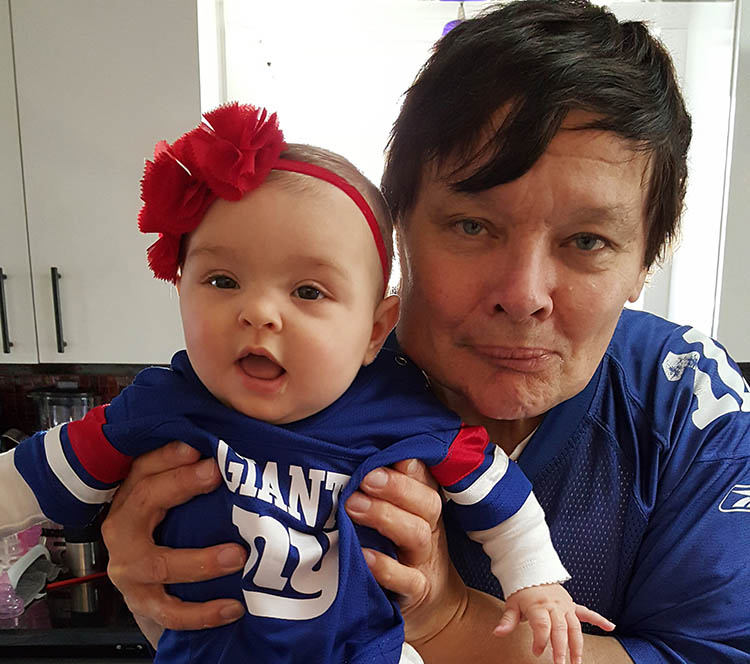 My dog saved my life.

I thought I pulled something in my chest while working out at the gym one day in 2009 and just ignored it. Then my dog Marquis kept scratching my chest in the same spot. Marquis always went over to my left breast and kept sniffing and scratching at my left nipple. He never went to any other body part, just the left nipple. I felt some itchiness and one day the dog broke my skin.

When the test results were in I was kind of shocked. The doctor told me it was very, very rare, but I had breast cancer and they’d have to operate. It was hard to detect since the lump was directly under my nipple. I thought women get this very often, kids get cancer. I’ll get through this.

I was bummed out for a couple of days. I stayed on the couch and watched TV. Was I going to sit around or would I live life the way I always did and get back on my bike?

A biopsy, scans and mastectomy all led to a diagnosis of Stage 4 metastatic breast cancer. The cancer is also in my bones and lungs.

Nothing was going to stop me from riding my bike though. The surgery wasn’t too bad and I remember asking, “Now how long before I can go on a bike ride?” The doctor told me to wait six weeks, so eight days later I went for a 10-mile ride!

Whenever I prepare myself for something serious, I like to hear the worst case scenario. For me it softens the blow, it could be worse. Then I come out better than they thought.

My wife Margaret and I will be married 36 years in April. I’m the luckiest guy in the world. She wants to go to every doctor appointment with me and I’m able to make her smile every single day.

The doctors knew I was very active. I felt good and wanted to stay that way. Dr. Wong, my oncologist, kept that in mind when planning radical treatments for me. She still credits me for pushing myself and having a positive attitude. People tell me, “You’re always cheering us up and you’re going through such crap.”

The Zometa damaged my teeth and made my jaw weak. I had pain in my jaw and swelling under my neck. Eight damaged teeth were removed in one day. A year later, there was more swelling and an abscess. The doctor hadn’t gotten all of one tooth out the first time and he had to go back in.

Last April I had my jaw removed. There were two fractures from under my earlobe to my chin and a prosthetic from Germany was inserted into my face. I told the doctors I had one question about the procedure. “After I get this done, will I be speaking German?!”

My mouth was wired closed for four weeks and I had a feeding tube for eight.  I continued to make people laugh which was good therapy. I even handed out pictures with inspirational captions. After all, I’m a man of few words!

When I initially learned about the breast cancer, I couldn’t tell my daughter Leighann right away. We’re tight, very close. We even bike ride together. I waited a couple of weeks for a family gathering to tell her. Now she shakes her head and can’t believe I do what I do.

There are some people at work who just recently found out I have Stage 4 breast cancer. I didn’t want any special treatment or an easier job at International Flavors & Fragrance. There are guys who won’t stay and work OT, but that’s not me.  Coworkers will say, “Even when you’re not well you’ll work.” My work ethic comes from my dad. He instilled it in me.

Growing up I used to play football with the oldest boy in a family of five. After his father died suddenly, every week my dad put a bag of groceries at their front door. That was my father. My mom was diagnosed with breast cancer at 80. Four years later tongue cancer. She was in the hospital for 28 straight days, but wasn’t worried about dying. She worried about “Johnny.”

Leighann and I had genetic testing and were negative. My sister was negative too. My oncologist said if he was a betting man, he would have bet I’d have a genetic mutation. Since technology has changed over the years, I was actually tested twice.

Speaking of twice, I’m having trouble with my jaw again and might have a second operation to repair the damage. Some doctors have suggested using bone from my leg as part of the reconstruction of my jaw, but the risk of having trouble walking isn’t sitting well with me. Margaret and I may go see some other doctors in our area, but we need to give this all some more thought.

I always feel peace and tranquility are on my side. People need to know breast cancer isn’t a death sentence. Find yourself a good oncologist who understands you and what you want to accomplish. All my doctors have told me my positive attitude has played a big role in how I manage my life. Kick cancer in teeth and go out there and do the best you can.

It will be seven years in February since my mastectomy. At 62-years-old, I feel so blessed. I make my wife laugh every day. I’ve got my work. My daughter had a baby girl and we get to watch the baby since my daughter works nights. I have no regrets at all.

To other couples going through this I want them to know they should keep loving each other. Go on with life and have some fun together. Mentally try to push the cancer aside. When I go for tests and stuff and see older couples, I forget about everything else when I see how in love they are.

Maybe I do get tired once in a while, but I don’t miss Saturday date nights with Margaret.