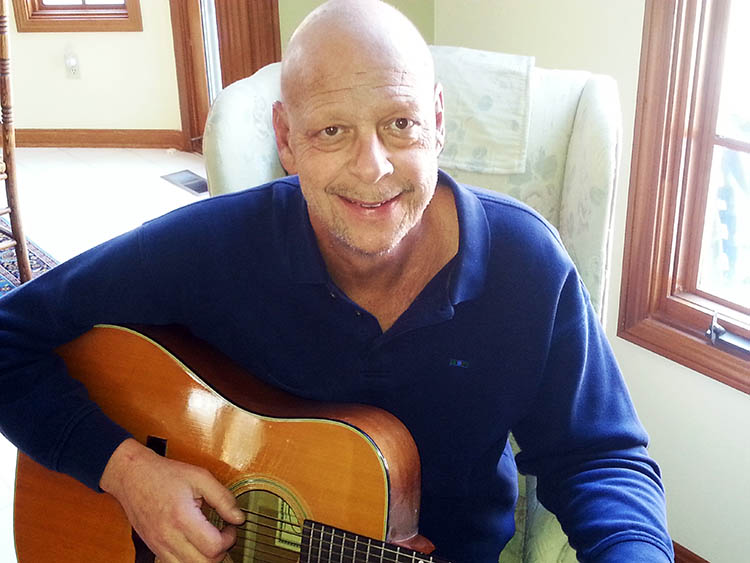 In September of 2012 I was diagnosed with male breast cancer in my left breast. The type of cancer is called Invasive Ductal Carcinoma, which means the cells had broken out of the ducts and had spread to the lymph nodes. I had noticed a lump in that area a year or so earlier, but didn’t really think anything of it. I had cysts and moles removed before that always came back negative, so surely this couldn’t be anything that I should be concerned about – I thought.

I went to see my doctor about something else and thought I would mention I had discovered this “thing” on my chest and asked her if I should have someone look at. She said, “Oh yes,” and scheduled me for a sonogram at the Women’s Center. When I arrived there, they said I was going to have a mammogram first! I couldn’t imagine how they were going to do that, but they did. During the sonogram they saw something, because next they were scheduling me for a biopsy on the left breast and armpit.

Two days later I get the call telling me they had “found some cancer cells” and I would be hearing from a Cancer Care Coordinator (Cindy) to schedule appointments with a surgeon and an oncologist. So now I’m thinking: Am going to have a mastectomy? But I’m a man and men don’t have breasts or get breast cancer! Yes we do.

About 20 years earlier I had seen a documentary about the famous 70’s actor Richard Roundtree, who played John Shaft in the Shaft movies, and learned he had breast cancer and had a mastectomy. I almost fell out of my chair. I couldn’t believe that men could get breast cancer. It turns out that 1% of all breast cancer diagnoses will be men. He was the only other male I had ever heard of having breast cancer.

After meeting with the surgeon, Dr. Bowling and the oncologist, Dr. Butler, a plan was set. I would have a mastectomy of the left breast and have several lymph nodes removed. The cancer had spread too much for a lumpectomy. Then I would undergo 6 rounds of chemotherapy, 28 rounds of radiation and then take a pill (Tamoxifen-an estrogen blocker) for 5 years and all should be fine. Of course, I would also get scanned once or twice a year to make sure they had got it all. They told me to look at the journey ahead more like a marathon, not a sprint and that I would do just fine.

At my first post-op appointment with the surgeon, she told me they had removed a 2 1⁄2 inch tumor and 28 lymph nodes. She also noted that the tumor had been developing or growing in me for about two and a half years. In hindsight, something wasn’t right back then. She also advised me that I had a really good chance of developing Lymphedema in my left arm as a result of the removal of 28 lymph nodes. Lymphedema is where your lymphatic fluid, or water in the body, gets trapped in the arm causing it to swell. There is no cure for it, just treatment such as compression garments and physical therapy. It took about two years for it to show up and I got that too. Prior to surgery, I told Dr. Bowling that I played guitar and asked if the lymphedema would affect that. After surgery, she told me she was very careful not to damage the muscles in my chest and that she literally plucked them out with her fingers instead of cutting them out!

I did surprisingly well with the first line of chemo and had none of the major side effects you always hear about. I did lose hair and nails, but still had an appetite and no digestive problems. I actually felt pretty good but I think that was due to all the Prednisone (steroid) they gave me. The radiation treatments were no picnic, but I got thru that OK too, with a slightly burned upper left chest. The major side effect from the radiation was fatigue.

So towards the end of 2013 it was time for my first scan. I was on the Tamoxifen for a couple of months and was hoping for the best. My oncologist called and scheduled me for an appointment on Christmas Eve to go over the results. I kind of wondered why we couldn’t just do talk over the phone, so I didn’t think it was going to be good news. My wife Cathy and I went to see him and he tells us that I have some lesions showing up on some of my bones – mostly vertebrae in my neck and back. It is called bone metastasis and is treatable with more chemo, osteoporosis drugs and possibly more radiation. The good news is that these lesions were on the bone, not inside the bones. They also did not appear to be a threat to my spinal cord or nerves in that area. There were some spots in the upper vertebrae in my neck that caused some concern, so I had another 12 or 15 rounds of radiation in the neck area.

Instead of conventional chemo that is infused through my port, Dr. Butler put me on a chemo pill of sorts called Xoloda. After a few months of this treatment, another scan showed signs of more lesions or bone metastasis, so we stopped Xoloda and had to reassess. The oncologist gave me the option of getting a second opinion if I wanted and said, “You’ll probably get six different opinions from six different oncologists.” I told him I was comfortable with his and the radiation oncologist’s opinions and I did not feel like I needed any other opinions. Well, he thought we should get a second opinion anyway and referred me to a doctor who specialized in DNA sequencing which is where they dissect the cells to determine exactly what it is and how to treat it. The second oncologist had me scanned for any new tumors he could possibly biopsy and fortunately for me, there were no new tumors and they cannot biopsy the bone metastasis. They decided to look at my original tumor again and determined the type of breast cancer was HER 2 Positive, which is what it was determined to be from the start. So now the option was stronger and more targeted chemos that specifically go after my type of cancer cells. I felt like we were back to square one.

This second line of chemo consisted of three different drugs for six months then two different ones for another six months. My scan in May 2015 showed some signs of healing on the affected bones – it was the first time I heard the word “healing” in more than two years. Due to some blood test results, or Markers, as they are called, we switched to yet another drug called Kadcyla (sounds like Godzilla, that’s the only way I can remember the name of it) for about four months.

In December 2015, I was referred to Dr. Brian Schneider to be part of a clinical trial for a new drug for HER2 positive patients, but a brain MRI showed some metastasis in the brain. I have three very small new tumors, so I am off the trial and was on radiation on the brain for 14 days.  We are also treating some of the bone metastasis on my vertebrae and will be finished with that radiation today. The chemo will have to start up again though. It will most likely be Herceptin and either Doxil or Adriamycin.

Early detection surely would have allowed me to avoid all that I’ve been through so far. When the surgeon told me the age of the tumor, I thought long and hard trying to remember exactly when I first noticed the thing. She said 2 1⁄2 years so I went back 2 1⁄2 years in my mind and remembered it was May of 2010 that I think I first noticed it. She nailed it. If I had said something to my doctor as soon as I discovered it, I may have only needed a lumpectomy and short round of radiation. I cannot stress enough how important it is for men to say something to their doctor if they feel something new or unusual on the breast. The male and female breasts are engineered the same way, they both have all the same parts but men have less mass. That actually makes it easier to detect a lump on men than women. But men don’t think it can happen to them, because they don’t have breasts. Yes, we do have breasts and yes, we can get breast cancer too.

I have remained pretty positive throughout this journey thanks to my wife Cathy, my family, friends, my employer (I’m an insurance agent), and all of the support groups available to me. I was honored by the Megan Ott Breast Cancer Foundation for being their first Male Breast Cancer survivor, was invited to roll out the “Pink Ribbon” onto the field before a Colts game and the health care providers that have worked with me have been amazing. They constantly remind us that I am getting the best cutting edge treatment and that there is hope and I am not alone in this battle.