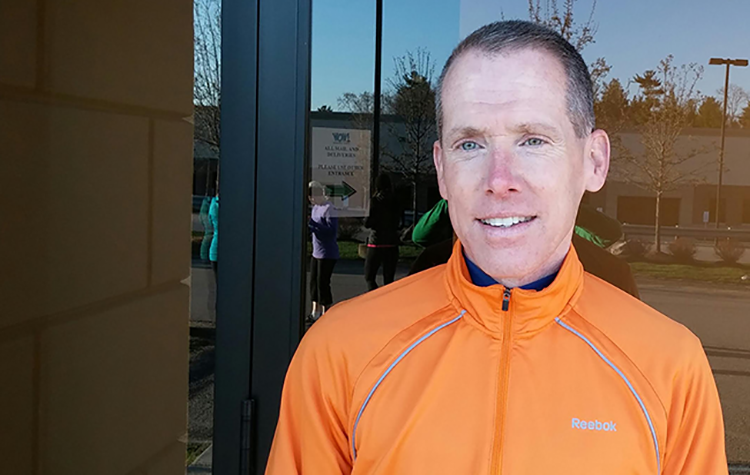 Last week I completed my second Boston Marathon. I’ve been running for five years now and have done four marathons in two years. Not too bad for a guy who’s a 2X breast cancer survivor.

In December 2008, I had a lump on my right breast that hurt like a son of a gun. If something or someone brushed against the lump I’d see stars. At my appointment with my primary care doctor, he immediately sent me for an ultrasound, which was followed by a mammogram. Because I was in so much pain and men don’t have very much breast tissue, two mammograms were inconclusive because the technicians were unable to push down hard enough on my breast.

After a biopsy came back positive for breast cancer, I went up to Dana Farber Cancer Institute and within a week a mastectomy was performed. At the time my lymph nodes were clean, but on January 8 chemo started because the lump was so deep in my chest the doctors wanted to be sure they got everything. That meant four rounds of chemo every two weeks for 2 months. After the chemo came 35 rounds of radiation, then in May 2009, the Tamoxifen. All was fine and I began going for regular breast check ups.

I first started running a year and a half after my breast cancer diagnosis to get ready for a 5K with my younger brother. I was training, but didn’t miss my check ups. A lump was found under my right armpit in July 2012 at a routine check up. Now the cancer was in my lymph nodes and progressed to Stage 3.
In August, the morning after I ran my first half marathon, I went in for another surgery. Then back to chemo for 13 weeks, followed by another 30 rounds of radiation. After the surgery, I had a drain for a month. No matter what I was doing the drain would fill up. For the first couple of weeks after surgery I walked and then got back to running. I used a fuel belt to keep the drain stable. I would empty the drain before my race and then it would fill up about halfway after I’d run. I never told my doctors about attaching the drain to my fuel belt, but I guess they’ll know now!

The drain couldn’t stay in any longer and after it was removed I had lymphedema for a little over a year. Thankfully, it was a mild case. I went to physical therapy and wore a compression sleeve when I would run during that year. Running has kept my mind clear. I do everything I can to maintain my health, but I can’t control cancer. I’ve done the BRCA testing, am negative. I have four sisters and two brothers, thankfully none of them have breast cancer. The doctors have no idea how or why I got cancer.

Life stops when I’m running and I try not to let this disease define me. Initially I thought, oh God I’m gonna die. That didn’t last long though. Before I left my doctor’s office I owned it. Yes there were times during chemo I wanted my life back, but the running always helped. I’ll look forward to a race and the cancer gets pushed to the back of my mind. Looking back to my first diagnosis I remember thinking, I’m only 44. The few cases of men I had read about with breast cancer were in their 60’s and 70’s.

There wasn’t much information to be found. Everything focused on women and breast cancer. Even the treatment men get for breast cancer is the same as women. I tried to get into a clinical trial, but there weren’t enough men to get the trial put together. I would like to see men included in these clinical trials. I understand the sample is smaller, but the results they obtain may make a positive difference.

Last December I turned 50. I’m now running with many friends and family, even with people from my gym. Guess they’re thinking “what’s my excuse” to not run with me. If you had asked me three years ago if I’d run a marathon, I would have said no way. This is who I’ve evolved into.

When I crossed the finish line last week at the Boston Marathon I said to myself, why do I do this?
The answer is simple. I’ve been through hell and back and this is nothing.