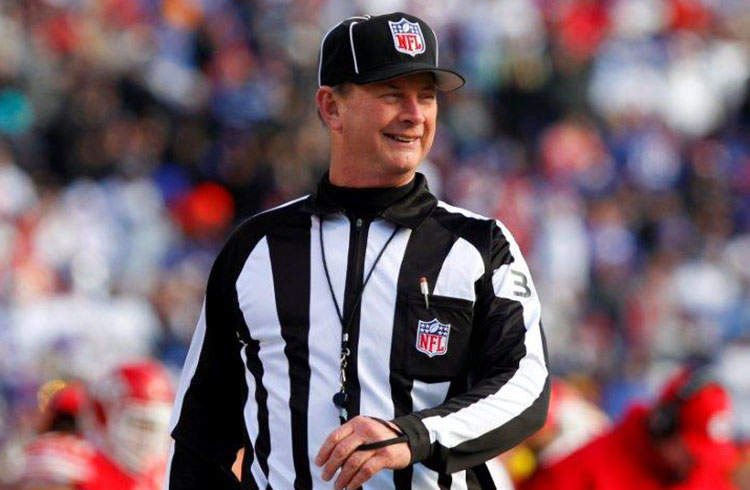 Since 1999, I’ve been a game official in the National Football League. Every July the entire staff comes together for an annual clinic. I would miss the clinic in 2005 because I had breast cancer. Even though some of my fellow officials were aware, I was told that it was a shock when it was announced.

That summer I was a 6’4, 210-pound, healthy 53-year-old guy. I had come in from a work out, laid down on the floor, and ran my hands down my chest. I felt a lump in my right breast. You couldn’t see it, but I felt it. I had my wife check the lump too and we decided to get in touch with my physician.

The doctor wasn’t too concerned. He thought the lump could be a cyst or some fatty tissue, but he sent me for a biopsy. I was shocked and in disbelief when I was told I had breast cancer. My first question was, “What is the most aggressive thing we can do?” I didn’t want to take any chances. A mastectomy of my right breast was performed 10 days later.

The invasive ductal carcinoma was caught very early. I had four rounds of chemo followed by five years on Tamoxifen. I lost my hair because of the Cytoxan, but that wasn’t a big deal to me.  I can see how it would be for women though. The Tamoxifen gave me some of the same side effects women experience. I had hot flashes and mood swings. Originally I had refused the idea of taking Tamoxifen but after the doctors explained that it would reduce the odds of the cancer returning I had to do it for my family.

Initially I was reluctant to call my illness breast cancer. I would say “I had a tumor in my chest.”  For me being a man the idea of breast cancer just didn’t sound right. Maybe if it was called something else it would be easier for men. Being a very private person it was difficult for me to discuss my illness with anyone other than my family and close friends. Being an official, my mentality is just do my job, and try to avoid any publicity. I don’t consider myself a celebrity, but being in the NFL naturally brings notoriety. I spoke with my family and friends and they helped me realize by talking about my journey it would help others. I hope sharing my story and my association with the league will bring awareness to male breast cancer.

After my surgery I was a little surprised at how flat my chest was. Reconstruction was discussed, but I didn’t want any more surgery. I just wanted to get well and be well. Plus, the surgeon told me reconstruction on a male was really hard to do. I’ve had second thoughts about the reconstruction, but how I look really isn’t a big deal to me. Anytime I go to a doctor and take my shirt off, I wait for them to say something. I’ll say I had breast cancer and the doctor is always shocked. I walk around in the gym without my shirt on and most people don’t even notice my scar. I just don’t have a nipple.

Every October the NFL goes pink. I’m all for it. We need to continue supporting women. I would like to see more emphasis on male breast cancer and make people aware that men can get breast cancer too. I do think about it. I’ve gone through it. I’ve lived it. Maybe they can give us one blue wristband and one pink wristband. It wouldn’t be a big deal. We could even get the players to do it. Our hats have a pink ribbon. How about one side of the ribbon is blue and the other side pink?

The NFL requires us to have complete yearly physicals which include a stress test, chest x-ray, extensive blood work up and an eye exam. Yes, refs get eye exams! But, they do not check our breasts. They should. We’ve learned so much about male breast cancer in just the last five years. If I had to do this all over again, I might have told the doctors to take my other breast too.

Whether you’re a male or female, if you notice any change in your body, get checked out. Don’t procrastinate. Our mentality as men is to be stubborn and not go to doctors. I was so fortunate that the cancer had not spread to my lymph nodes or other organs. Even though I have not participated in genetic testing I realize it could be beneficial to have that information.

Now I like talking about my diagnosis. I enjoy it and want to make a difference. An odd thing for me is I’ve talked to a lot of women who have been through breast cancer, but never with a man. I haven’t met another male breast cancer survivor in person, but that could change now that I’m part of the Male Breast Cancer Coalition.

My job has given me the opportunity to travel around the country, but the best part is the camaraderie and friendships we all have. I was always interested in sports. In high school I played football, basketball, and ran track. My dad was a high school football official and he encouraged me to get involved in officiating. I worked as a teacher and a principal in the local school district for 34 years, but now I’m retired! My main job is staying in shape for my football career. I enjoy playing golf with my officiating friends, but my love is my wife and daughter!

Next season I will be 11 years cancer free and it will be my 18th year as an NFL official. I may be the only one of 122 who had breast cancer, but other officials have experienced cancers too. Back in 2005 if the doctor had touched my breasts I would have thought, “What are you doing?” Now I know that when the annual physicals are performed it would be a good thing for the doctors to include checking the breast for any type of abnormality. It might be a lifesaver!