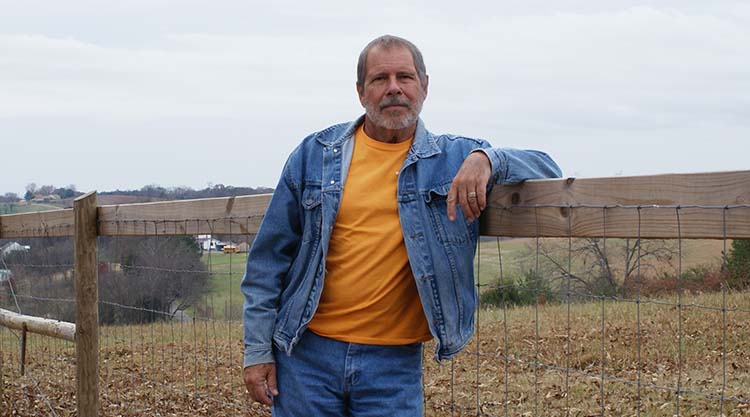 All I want to do is save one man’s life. In 2013, my journey began where I least expected – my dermatologist’s office. I had noticed a lump under my left nipple a few years earlier while living in Indianapolis, Indiana. Sensing that something was wrong, I brought it to the attention of my primary care physician who wasn’t overly concerned. The lump was not painful, it wasn’t bothering me so I moved on.

Shortly after retiring as a store manager for the Kroger Company my wife, Joyce, and I moved down to Blount County, Tennessee. Once settled and connected with a network of doctors, I discussed the lump with my new primary care physician. Like my doctor in Indiana, he wasn’t concerned. He felt it was a calcium deposit. It was when I was having my annual check-over with my new dermatologist that he noticed the lump and my now inverted left nipple and grew concerned. His advice was to have my primary look at it. He even called my doctor to relay his concern.

At my yearly physical my doctor examined my chest and decided to send me to the Breast Surgeon at Blount Memorial Hospital. Within a week my wife and I were at the surgeon’s office. After examining my chest for just a few minutes, she set up tests for that day. I had a mammogram, an ultra sound, and a needle biopsy. Sitting with us after the tests, the surgeon shared her thoughts, “We think you have male breast cancer. We can’t tell you for sure until you go through the remaining tests, but everything so far points to breast cancer.” I took in the news, but with denial present, it just didn’t register.

The following week involved a PET scan, a chest X-ray, an EKG, and a surgical biopsy. Upon receiving the results of these tests and having no doubt in her mind that I would undergo chemotherapy, my surgeon scheduled me for surgery to implant the chemotherapy port. Then we met with the oncologist.

As Joyce and I sat in his office, I was still in a place of disbelief. The doctor informed us that I was Stage 2, the tumor was 2cm and had started to be ductal, but luckily it was not in my lymph nodes. The therapy plan was to begin with six chemo treatments followed by a full mastectomy of my left breast. Then we met with the Acute Care Nurse Practitioner. She reviewed my oncoming medical path explaining the possible side effects of each chemo treatment. Three weeks following my initial appointment with the Breast Surgeon, I was to begin the chemo treatments.

From the time I first told Joyce about my lump she had been saying men can get breast cancer, but denial is great at selective hearing. It wasn’t until I sat in the chair for my first chemo treatment that it hit me, I had male breast cancer.  I made the decision to not change one thing in my life. I decided right there and then that cancer was not going to dictate my life.

I had been walking two miles a day at least five days a week and I had just begun to fence our seven acre property. The fence project was now to be my cancer therapy – my chemo fence. I told myself that if I didn’t feel like walking or if I felt too weak to work on my fence, I would just do it. The walking and building the fence were going to help me feel better. They were going to help me get through what was before me. You see, I wanted to live….I was going to beat this…..I was going to win!

The chemo’s side effects were my new challenge. It seemed like all of a sudden they exploded on the scene: numbness in my fingernails, loss of taste, dry skin, and bloating became my partners on this path. Then came what I call the mind side effect – the chemo demon armed with mood swings and comments coming out of nowhere! But the worst was when my hair and beard left. To me this was the loss of my identity. I couldn’t look in the mirror. When I did there was an image of someone I didn’t know.

I kept walking, worked on my chemo fence and picked up some great chemo pointers from fellow patients. Guys, Clariton helps reduce the muscle pain most patients have from the Neulasta shot given the day after every chemo treatment. I got through this rough patch and in July 2014 I had my last chemo treatment. The lump under my left nipple was gone, but now came the mastectomy.

The surgery removed all of my left breast tissue, the nipple, and one lymph node and some of its surrounding tissue. I arrived home with a six to seven inch incision on my chest, a three inch incision under my left arm, and a tube sticking out of my chest to drain the fluid. I was exhausted, but I could see the light at the end of this long cancer tunnel.

At my two week follow-up appointment, Joyce and I quietly listened as my surgeon read the report. I sat there taking in the news that I was cancer free. Ringing inside were the words, I AM A SURVIVOR!

Following the mastectomy, my oncologist recommended I have genetic testing done – including the test for the BRCA gene. My BRCA results were negative, but one of the tests related to the colon came back with a variation. It was the one explaining why I produce colon polyps. It is why I am on a three year colonoscopy schedule.

Today my journey is to help raise awareness of male breast cancer. I share my story hoping it will save a man from losing his fight with a cancer everyone relates to women. I want men to be informed about what to look for with this disease. I am also a member of a breast cancer support group at Blount Memorial Hospital – the only male member so far. Each year Joyce and I take part in The Komen Race for the Cure in Knoxville, Tennessee. I take my place as the only male in the middle of all the survivors. My hope is one day other male breast cancer survivors will join me.

For now my presence raises awareness that men get breast cancer too. I know my own battle will never be over. Cancer will always be on my mind, but with my hair and beard back I am feeling more like me each day. I keep up with my walking, we work on landscaping the property, and my chemo fence has only 300 more feet to go! And at the end of the day I think back on this journey and smile because, Today was an absolutely beautiful day!