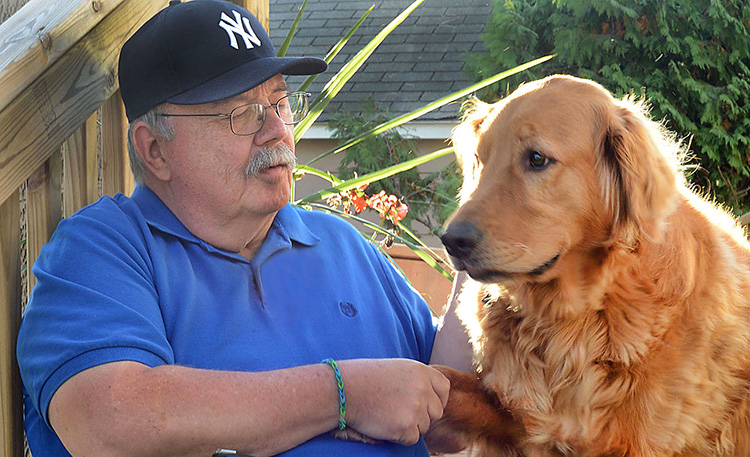 Jeff Heinz, 66, who retired as a newspaper photographer after more than 35 years, never thought he’d become a storyteller. His diagnosis for male breast cancer changed that.

He was alerted by his good friend, breast cancer survivor and advocate Jodi Suntken, on Facebook last January about the warning signs of breast cancer. She shared a Worldwide Breast Cancer awareness campaign named      “Know Your Lemons.” The campaign included a poster with lemons nestled in an egg carton with each lemon depicting a physical abnormality that could indicate breast cancer.

Jeff had recently noticed a change in his chest area — an inverted nipple. He showed it to his family physician, Dr. David Ruen, at a scheduled checkup later in January. Ruen examined the area and felt a lump.

His diagnosis is especially important to his two brothers and three sons because Jeff has the inherited breast cancer gene BRCA2. Men as well as women can carry the breast cancer gene. “That was a shocker,” Jeff said. “I want men to be aware of the gene.”

Jeff’s mother, Jean, of Mason City had breast cancer but she doesn’t carry the gene. There are few close relatives on his deceased father Paul’s side. Because he has the breast cancer gene, Jeff’s brothers and sons have a 50 percent chance of also having the mutation.

Jeff’s first weeks after diagnosis were filled with blood tests, a mammogram, an ultrasound and a needle biopsy. Test results concluded the breast cancer was invasive ductal carcinoma early Stage 2 with a four-centimeter tumor.

On Feb. 20, 2017, he underwent a left breast simple mastectomy. After recovery from surgery, he began a regimen of chemotherapy April into June, which he did not complete due to adverse side effects. After a rest from chemo, Jeff began 33 days of radiation therapy on Aug. 2.

Brenda Heinz, Jeff’s wife, had worked mostly as a pediatric nurse so she had little experience with breast cancer. Many weeks this past spring and summer were “full of sitting, waiting, wondering,” she said. One of her main supportive roles was to make sure her husband got the nutrition he needed even when food wasn’t appetizing.

Heinz’ future involves frequent checkups with oncologists and continued exercises to regain strength in his arm. He will also be on the drug tamoxifen for five years since his cancer is estrogen-fed.

Heinz’ brothers and sons have been encouraged to undergo genetic testing since a positive marker could put them or their children — boys and girls — at a higher risk for breast cancer.

Men who have had mothers or sisters with breast cancer, especially if those females have the genetic mutation, are at higher risk for breast cancer, according to the National Cancer Institute.

Jeff credits the physicians and staff of Mercy North Iowa and the Mercy Cancer Center, including radiation oncologist Dr. Michael Marks and medical oncologist Dr. Joginder Singh, for helping him and his family through the difficult diagnosis and treatment.

He also relied on Shari Showalter, oncology nurse manager and breast health specialist at Mercy Cancer Center. Jeff admits he fought depression and was counseled on that aspect of the disease, too. His family, friends and a golden retriever named Charlie boosted his spirits on those tough days.

Since the completion of radiation in September, Jeff finds his strength returning day by day.

This fall has him working in his backyard pond, planting more swamp milkweed and black-eyed Susans, taking photos of the birds at his many feeders and feeling thankful.

“Sitting in the doctor’s’ offices, all the posters show only women,” he said. “My goal from day one was to get out information that men need to be aware of this cancer. I just had to do it.”

Based on the story by Jane Reynolds for The Globe Gazette Oct 28, 2017