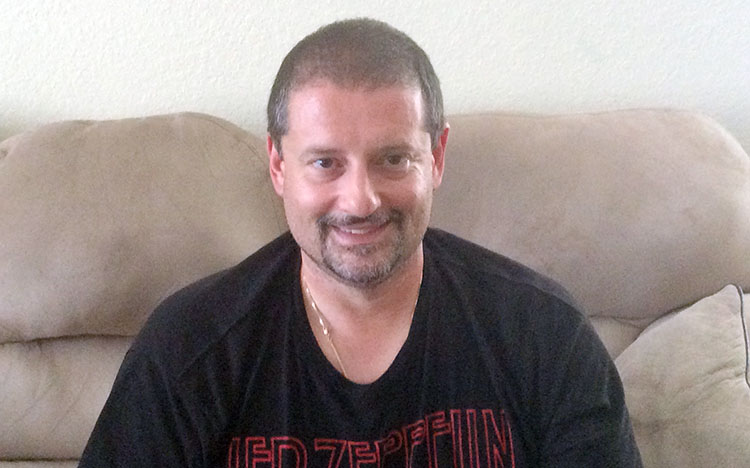 I may have a different perspective than most breast cancer survivors. I have already survived an usual disease, one I was told there was a 1% chance I could even have.

I was 35 when I found myself in a neurologist’s office. He told me he was 99% sure my headaches were nothing, but to be 100% sure he ordered an MRI. The MRI revealed Hydrocephalus. Five brain surgeries in a period that spanned over five years left me disabled and with memory problems. I was a bond trader on Wall Street.  Being disabled with the loss of income forced me to relocate my family to Florida to save money.

Fast forward two years when I decided to try to get into shape. One day I leaned into a curl machine at the gym and came away soaked in fluid, not sweat, but something else. I did some googling and read something about men who are out of shape, but start working out, can have discharge from their nipples.  It didn’t seem right, because more and more fluid kept coming out. I went to my primary care doctor who had just returned to work from her own bout with breast cancer. She seemed concerned, but said she was very sure it was nothing. Still, she wanted me to get a mammogram and sonogram of my chest.  I went home very confused, but was going to make the appointment.  That night my PC doctor called me and wanted to make sure I made the appointments.  She said, “Don’t be a guy and really get this checked out.”

The mammogram and sonogram were very uncomfortable. The nurses were not used to men being their patients and the terms they used were women only. Thankfully I dealt with it and as a result found out I had cancer.  When the doctor told me I had breast cancer I remember feeling very shocked and alone. You see people on Facebook talk about being diagnosed, but as a man with breast cancer I felt embarrassed and confused. I tried hiding it or calling it chest cancer.  I was lucky in that we caught it very early, Stage 1.

As if I didn’t feel embarrassed enough, I got a letter from my insurance company saying my “sex change” had been approved. It was like a punch in the gut. I started making phone calls to the doctors’ offices and insurance company to fix this issue. Seems they had to fiddle with their system to approve tests normally for women and now needed for a man.

My surgeon did a lumpectomy and ordered genetic testing. I got a call soon after informing me I was positive for the BRCA2 gene mutation, which I inherited from my mom who has no signs of cancer. Upon hearing about this, my brother went to get tested and came up against the same roadblocks in getting these tests approved by the insurance company. He is positive for the BRCA 2 mutation as well and needs to be monitored. His four daughters will need to be checked when old enough. My children are not old enough to be tested yet, but have been made aware of the risk level and will be tested when they can be.

Because of the increased cancer risks associated with being BRCA2 positive, my surgeon and oncologist felt a double mastectomy was my best treatment. On September 4, 2014 at 44 years old, both of my breasts were removed.

After the surgery I felt even more embarrassed. My chest was all scars and divots.  So far I have had two reconstruction surgeries. The surgeon did fat grafting from my belly area to make me look more normal. The process involved liposuction of belly fat, the fat was processed through a machine, then injected back into the affected areas to fill in pockets and scarred areas.

I don’t take my shirt off in public and I am very self-conscious about how I look.  My doctor says that I will need at least one more reconstruction surgery.  I am also contemplating getting a chest tattoo to cover up my scars and “missing nipple.”