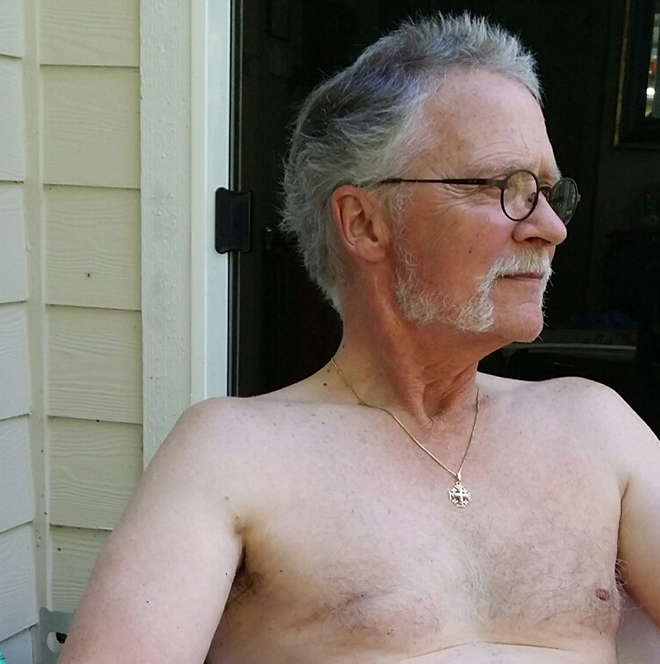 My wife Rebecca first noticed a lump under my right nipple while we were making love. I remember the look of terror on her face when she put her finger on what we thought was a tiny lump and said, “What the hell is this?  We are going to see Steve (our family doctor).”  Having survived testicular cancer in 2000, I now found myself wondering if I would hear that all too familiar word again, CANCER.  Who knew that such an intimate moment would save my life?

“You have nothing to worry about, it’s just a cyst” was what I heard from my doctor in May 2008.  Two weeks later I was back in the doctor’s office telling him I didn’t give a rat’s ass what it was, I wanted it out!  He referred me to the surgical office down the hall and a week later I saw the surgeon.  He too said, “Oh nothing to worry about here, it’s just a cyst and let’s get that out of there now, shall we?”

After numbing the area several times he dug and dug only to find a shiny white encapsulated “cyst” the size of my thumb.  So much for it being a little nothing.  Once again, the surgeon assured me, “It’s just a cyst but we will send it out to pathology and let you know when we get the results back.”

It wasn’t until three weeks later that I received a call telling me the lump was indeed breast cancer and to come back into the office right away. I was also told the local cancer review board made a case study of my diagnosis.  Given that the tumor was as large as it was, I was told I was lucky the cancer wasn’t metastatic.

Determined to never hear that CANCER word again, I decided to have a double mastectomy. I was ready to do whatever it took to eliminate my chances of more breast cancer.  On June 25, 2008, I underwent my double mastectomy.  The fact that I had developed breast cancer — “breast cancer” of all things! How was that possible?  Men don’t get breast cancer.  Do they?  I guess they do and frankly the thought scared the hell out of me.  I was shocked and overwhelmed by the diagnosis and scared that my life was forever changed.  My wife as frightened and certain she was about to lose me.

I returned to work in the State Department of Health in my position as a Human Resources Consultant two weeks after my mastectomy. While walking to the coffee shop one afternoon I happened to run into a man I had previously worked for and he asked about my surgery.  He’d heard I had been out for some sort of surgery.  When I told him what had happened he sneered and said, “What’s the problem, you didn’t need your tits anyway.”  He just didn’t get it.  No one got it, not even the Susan G. Komen foundation.  They never responded to my calls and emails when I went looking for any support I could find.

As a survivor of both testicular cancer and male breast cancer, it is my feeling that these two cancers can, and often do, have significant physical and emotional impacts on our sexuality.  My experience has been these cancer types, along with prostate cancer, can significantly change the way we see ourselves as men, lovers, husbands and partners and may have a significant impact on our relationships.  It has been this conviction that has motivated me to begin two Facebook sites and a blog to address men’s risks and fears about three cancers that I believe are most damaging to a man’s sense of self.  Surely there are many other cancers that threaten our lives and well-being but these three can and do change the way we see ourselves and will have an effect on our relations with our partners.

In May of 2015, nearly seven years post mastectomy, while I was fueling my truck, a squeaky clean, shiny-faced boy of 20-something came over and asked if he could demonstrate a waterless wash/wax product.  (“Fast Wax” Company’s product “FW1”) I said sure and darn the thing worked like magic! Then he told me a portion of the proceeds from the sales were going to the Breast Cancer Research Foundation (BCRF).  I bought $100 worth of the product, told him I was a breast cancer survivor and we spent an hour talking about male breast cancer.  He had no idea men were at risk, and was thankful for my input.

As soon as I got home I emailed BCRF.  Within 20 minutes I had an answer and we opened a dialogue about male breast cancer.   BCRF referred me to Dr. Mary-Claire King at the University of Washington, who was conducting a long-term broad spectrum genetic study.  This opportunity was amazing since I had fought with my insurance company for seven years after they refused to cover the cost of genetic testing.

My daughter is a breast cancer survivor, diagnosed July 12, 2013.  She has had a double mastectomy and total reconstruction and seems very well adjusted.  My paternal grandmother died from bowel cancer, my paternal grandfather from liver cancer and my father from liver cancer.  I’m still not sure why my insurance company couldn’t see their way to cover genetic testing as my family history certainly showed a pattern. My oncologist recommended BRCA 1 and 2 testing and my health insurance company declined, even after my oncologist called and tried to press the issue.

Since my call to BCRF and their referral to Dr. King’s lab, both my daughter and I have undergone genetic testing and have been ‘inducted’ into the study and our genetic samples are currently being tested for 50+ genomes/mutations.  The results will be helpful for future breast cancer research and for my son, daughter, six grandchildren and their health care providers. So far my son has chosen not to address the risk but I am glad he is at least aware.

As for me, I will continue to share my story, taking every opportunity to talk with the men I meet or their partners and often remind them, “Hey breast exams can be fun with the right partner.”

I want to focus on these cancers in men, because I believe they all have some impact, some worse than others, on our sexuality.  I believe the impact is both physical and emotional and for me both my cancers have proved to have a profound effect on how I view myself.  I recall distinctly when I had testicular cancer.  I was single at the time and in my 50’s and living alone.  I recall the uncertainty of whether I would ever really want to expose myself to a new woman again and worried about her reaction to having only one testicle.  I felt surprisingly shy and embarrassed at the time.  In retrospect, it seems pretty goofy, but nonetheless, it was how I felt.

Oddly, the scarring from my mastectomy has had a profound effect on me as well and it was two years before
I would be seen in public in just a T- shirt and seven years before I ventured out on my patio without a shirt at all.

I remember distinctly as recently as this June stepping out onto the patio to join my wife and suddenly
realized I was without a shirt.  I mentioned that to her and she replied, “Yes you are, you look great and
I am proud of you.”