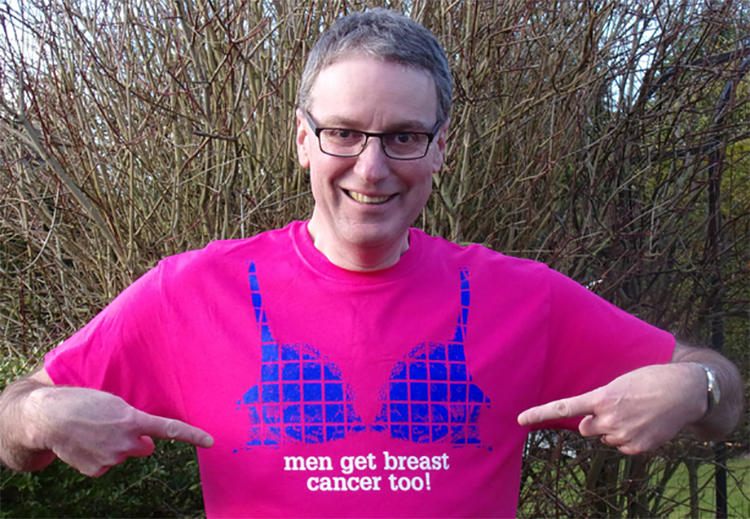 Fifty-eight-year-old Giles is a Survivor.

My father was one of three boys. Sadly, his younger brother, Christopher, my uncle, was also diagnosed with breast cancer and died two years later, in 2006, also aged 77. He initially had a single mastectomy, but was then diagnosed with secondaries on the other side. At the time, we felt it must have been unique having two cases of male breast cancer in the same family.

In 2014, I was also diagnosed with breast cancer. Because of my family history, I’d started checking myself. I discovered a lump on my right breast, hidden right behind the nipple. I ignored it to start with, but eventually had it checked out by my doctor, having been encouraged by my wife, who’s a nurse. My GP had never seen a case of breast cancer in a man before.

I believe there are two main reasons why men are less likely than women to seek a doctor’s opinion if they find a lump. Men, on the whole, do not realize that they can get breast cancer. It’s still thought of as a women’s disease. On this basis, a lump would not be associated with breast cancer. Secondly, embarrassment – men who do find a lump in the chest area may feel uncomfortable to seek help.

Some men might question their masculinity after receiving a breast cancer diagnosis but that is only naivety because men don’t realize the similarity in breast structure between men and women. If they did, they would realize that breast cancer can be a unisex disease. Between three hundred and fifty to four hundred men a year are diagnosed with breast cancer, but I worry whether this is a true refection as there may be men that have breast cancer but don’t realize it.

Before I was diagnosed, I had a biopsy and a mammogram, which is very painful for men, as we have so little breast tissue! When I went back to see the consultant for my diagnosis, although I was expecting the worst, the news was still an immense shock. I recall the mammogram waiting room as rather surreal! I was the only man (apart from a few husbands) in the breast cancer clinic waiting room. However, I suspect that as most people didn’t realize that men can get breast cancer, they probably thought I was visiting someone or there for something else.

I experienced anxiety once my breast cancer was discovered, simply on the basis that for me, it was close to home. I was also aware that men with a positive diagnosis typically have a lower survival rate than women. I didn’t feel embarrassed simply because I knew a lot about breast cancer in men.

I had a double mastectomy. Even though the cancer was only in one breast, I felt that with my history, it was my only option. I also had some lymph nodes removed, and a course of radiotherapy. I’m now taking Tamoxifen for ten years and having annual check-ups.

I was worried whether or not I should be taking the same drugs as women and I still am. I am not convinced by the argument that just because our breast makes up is similar to women, we must use (in my case) Tamoxifen. Admittedly, I am still alive! I am better now at taking my top off in public places, but I still don’t find it at all easy. One of the problems I have is that having had radiotherapy, it killed off the chest hair on the side of the treatment. I look like a patchwork quilt and so the scar (double mastectomy so it’s large) becomes more obvious. As a result, people do stare although I sometimes use this as an opportunity to discuss breast cancer in men.

I’ve been tested for the BRCA gene and the results came back negative, as they did for my dad and uncle. I have a son and daughter in their 20’s but they are still too young to be tested although they have the advantage of awareness and a knowledge of our family history. I remain convinced there is obviously some sort of underlying gene which has caused three cases of male breast cancer in our one family. For the moment, my children are having to be very aware of any changes to their bodies and are checking themselves regularly.

I used the Maggie’s Centre in Cheltenham after I was diagnosed, and my son has also fundraised for them by swimming round the London Docks. They were a wonderful support to me psychologically after my diagnosis and I was able to attend a seven-week course with them called ‘Back to Work’. I’d recommend organizations like Maggie’s to other men. They were certainly a great help to me and had no problems accepting a man into a predominantly female group of people affected by breast cancer.

Since my diagnosis, through Walk the Walk, I have met up with several other men who have experienced breast cancer and it has been good to discuss it with people who understand the issues involved. I really want to try and push the awareness side of breast cancer in men. If we can save just one life by raising more awareness – its job done. I believe that there are significantly more men who are diagnosed with breast cancer who we simply do not know about.

I am hopeful that in five years’ time, the subject of breast cancer in men will be discussed a lot more openly and that men will automatically check themselves for any lumps in the chest area – safe in the knowledge that should they find anything, they can (and should) get it checked out. It would be great to have marketing material aimed at both men and women in a more neutral tone. 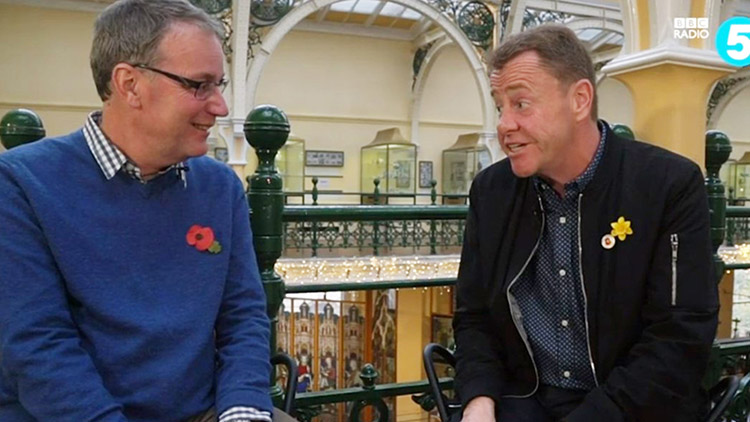