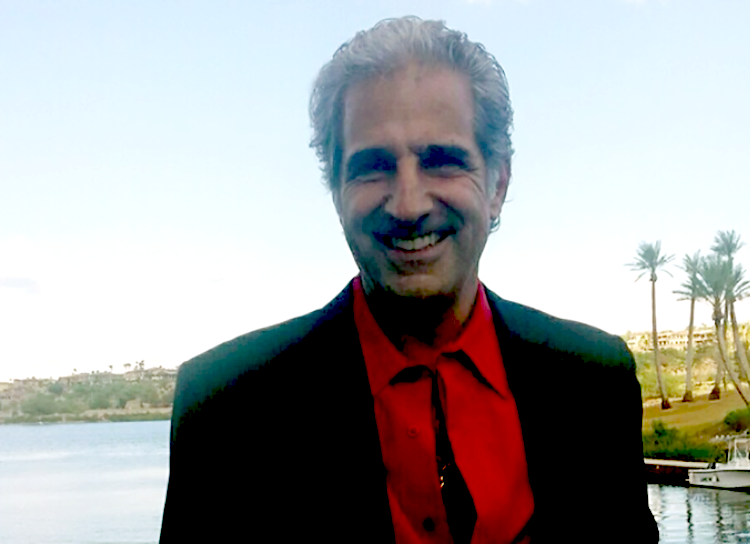 When I heard about Bright Side, a musical centered around male breast cancer, I was flabbergasted. I had not heard anyone talking about men and breast cancer. Not on TV, nowhere. Like it’s taboo. The discussion is all about women, but finally someone was going to talk about male breast cancer.

I’m a race driver coach. At SPEEDVEGAS I teach inspired racecar drivers how to drive faster and faster around each lap on a real racetrack. We drive exotic cars at high speeds around a 1.5 mile track with 12 turns. I have clients from all over the world and we give them an experience of a lifetime.

Stephanie from my local Susan G. Komen affiliate came to SPEEDVEGAS to discuss some Race For The Cure fundraising ideas. My marketing group had told her I am a breast cancer survivor. I ended up bringing one of our yellow Ferraris to the race where I was introduced to the Bright Side cast and producer. We did some interviews and have remained close ever since.

Racing for me started at a young age when I lived in Italy, right after my military service in Israel. As a citizen of Israel, it’s your duty to serve in the military. It’s a must. After the Army, I moved to Italy when I was 23 and met the love of my life Antonella. We lived in Rome for 11 years and then decided to move to the US. From my childhood it was a dream of mine to move to the US. We got up one day, packed up everything and settled in New Jersey. We came with not much. Slowly but surely we created financial strength.

When I lived in New Jersey, I always wore a T-shirt under my regular shirts. In late 2001, early 2002, I started to notice some stains on my shirts where my left nipple was. They were very small spots and I didn’t pay much attention them. One day Antonella saw a fresh stain and was very alarmed. We thought it was an infection, or maybe even the cat scratched me. Antonella wanted me to see the doctor, but you know how men can be. I never got around to it.

A couple of weeks later we took the kids to the zoo in New York City and I noticed my shirt was very wet. This time there was a very big stain. I touched my breast, and then squeezed it and a big stream of plasma like fluid came streaming out. The next day we went to the primary care doctor who sent me to a general surgeon.

Well, the surgeon told me not to worry. He said it couldn’t be anything big, but ordered a biopsy anyway. When I returned to the surgeon’s office 10 days later for my results, it took him a few minutes to settle into his chair before delivering the news. He seemed shocked, his face was red. He even had trouble pronouncing the words “breast cancer.” He wanted me to have surgery immediately, but we had a family vacation planned. I was not going to miss time with my family and insisted we wait. So twelve days after learning I had breast cancer, I had a mastectomy of my left breast.

I’ve had broken bones, trouble with my appendix, and various other procedures, so this wasn’t my first surgery. When I woke up after my mastectomy, I simply thought, OK no big deal another one done. Just the fact that I got rid of the beast made me feel good.

The surgeon was very confident there was no indication of more cancer when he removed the breast tissue. He was pretty satisfied my DCIS breast cancer was localized. No lymph nodes were removed. The only treatment I accepted was a five-year course of Tamoxifen. I did not believe in chemo. I thought, “It is what it is.” I didn’t want to lose my hair. I was not willing to throw up.

The Tamoxifen did a bad number on me. The side effects were similar to what women experience. I had hot flashes, confusion, trouble with my eyesight and gained weight. In men we have one more though, and it’s not very comfortable to talk about. My sexual drive went down big time. It was a bad experience all around. Can you imagine if I had done the other treatment?

Antonella was the one who told our two children about my male breast cancer. It was her decision. She knew how to deliver the message in a way for it to not be depicted as an all black situation. Our daughter Nathalie was 17 at the time and our son Shon was 11.  I remember vividly how Nathalie wrote a beautiful poem about my breast cancer the same night. She’s an actress, a stage girl.  I know the kids were drained. Antonella too, but she was the captain of the boat.

Every three-six months I would see my oncologist for check ups and blood work. The blood tests always came back fine. I was in remission, told goodbye and have a nice day.

When I had the mastectomy, I had asked the doctor to remove my right breast at the same time to be safe. He told me no because insurance would not cover the surgery. He said there were no two ways about it. There was no reason insurance would pay for such a surgery.

Well, 10 years later, boom! One morning in 2012 I woke up with blood on my T-shirt. All of a sudden it was the exact thing all over again. I thought, “Oh shit, here were are again.” Now there was a discharge from my right breast. I thought no, it was not possible, but I had a feeling all those years ago something might happen.

A mastectomy was performed on my right breast. The doctors wanted me to have all the same treatments, Tamoxifen and chemo. Again I would not do chemo and honestly, I barely took the Tamoxifen. I was sick and tired of it. There was no way, no how I would be on the medication for another five years. My oncologist was not happy.

When I had to tell my family about the second breast cancer diagnosis, it was pretty difficult for them to digest. The general feeling though was, “You did it once, you’ll get out of it again.”

It wasn’t until now, when I was writing this story, that I learned just how emotional everyone was about my breast cancer, both times. They kept all their emotions from me. Now I know Antonella met with our entire family and told every single one of them to only give me encouragement. I was their priority. In her words, “There was no way my companion is going to leave me or our family.” She told them they could cry and be worried, but only behind closed doors. She felt it was important for everyone to have a positive attitude around me. They were all sad and worried, but I had no idea. Antonella never told me, until now!

After my first mastectomy, I became very sensitive to the cold weather. I also felt like I needed an open horizon. I didn’t want anything in front of me. I needed to see clear to the mountains. Perhaps I was going back in age to when I served in the military at 17-years-old. I wanted to be in the desert and we had visited Las Vegas. I knew the scenery and weather were for me, so we moved from New Jersey to Las Vegas.

Now I am 59 years old and every three months I’m supposed to go for blood tests. My oncologist always says, “Hello. How are you?” He’ll touch me and say, “All is good. Goodbye.” Sometimes I don’t go every three months, but men, be aware of your breasts. We have breast tissue just like women. Check yourself, touch yourself. If you feel any anomaly, go to the doctor and talk about what’s going on. Some kind of leak is a huge sign.

It’s important to raise awareness of male breast cancer. The interview I did with my friends at Bright Side will be used as an intro to the show down the road. I’m in touch with Robert Torti, the lead actor whose character has breast cancer, and I see some of the people involved with the show around town. Nathalie even shared the poem she wrote after my initial breast cancer diagnosis with Robert. Bright Side was very emotional to watch, but I went twice!