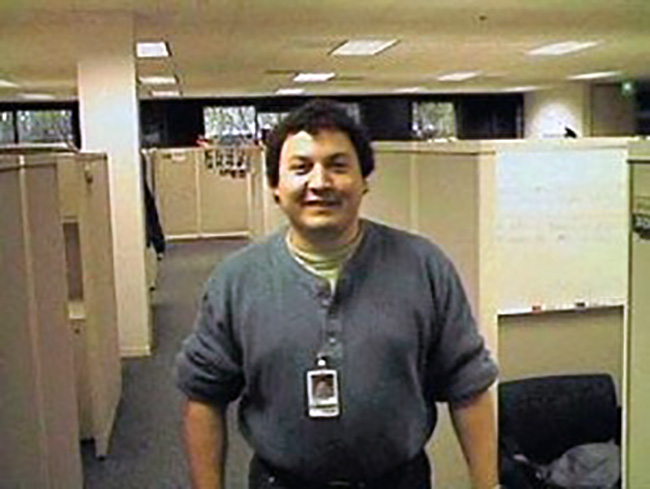 In 1970, I met my future husband, George Albert Hansen, at a pool party at his parents’ house in Walnut Creek, CA.  His mother and my father worked together as physicists.  I was seven.  George was eleven with curly dark hair and brown eyes. He shook hands and politely showed me his model train set.

Over the years, George and I saw each other at family parties. We both smiled a lot.

In 1981, when I was a seventeen year old nerd needing a date for my senior prom, I called George, then a senior majoring in engineering at Cal Berkeley, though he said he was majoring in pinball. (Guys lined up quarters to play him). He accepted the prom invite, purchasing a vintage tuxedo jacket and driving us to the San Francisco Galleria in his Dad’s Buick.

One day George and I were sitting close together on the white leather sofa in my Dad’s living room.  I had my knees up.  There was a rain storm and George put his head on my shoulder.  “I’m afraid of thunder,” he said, “aren’t you?”  When I said I wasn’t, he said “Then how am I going to kiss you?”  I decided I was afraid of thunder.

We were together from then on.

I got through law school because of George.  I was super stressed by all the classes and exams, but George calmed me down.  He’d drive up every Wednesday from Santa Clara, where he worked as a software engineer, to Davis to have dinner with me.  I’d come home weekends to see him. A gifted test taker, he coached me through the bar exam. After I graduated in 1988, we moved in together.

We were both introverted, anti-social, only children.  We cooked (ok, George cooked), did home improvement projects and hung out together.
Just the two of us.

I was so loved.

George was dedicated to his job as a software architect. He was an uber productive coder, an inspired designer, and a generous mentor.  He had no arrogance.  He did everything from high level development to weekend bug fixes. And he did it cheerily and gracefully with a dry sense of humor. He’d also want you to know that he was the curator of the “Geohan II” collection on the PCGS website for coin collectors.

When he was diagnosed with metastatic male breast cancer in 2009, George told me he’d beat it.  Until then, he hadn’t known he even had breast cancer. Neither did I.  He worked full time, driving himself to and from chemotherapy and radiation treatments. He did all the cooking, remaining chubby (even on chemo) and upbeat. He treated his medical care like taking on a co-worker’s job after down-sizing.

I later learned he’d thought he’d injured his chest some months ago while working in the garage.  When the wound didn’t heal, he became concerned, but put off going to the hospital until his work schedule permitted. Please learn from his delay and don’t make the same mistake. (That’s what I wanted to tell you the most).

George wouldn’t let me come to the hospital with him.  He directed his doctors not to talk to me saying they were “gloom and doom types,” promising he’d always tell me the truth, but the information would come only from him.  I thought he was the most considerate cancer patient in the world.

I think he saw himself as a warrior.  William Wallace riding into battle alone against the cancer, defying the oncologist who had predicted his doom.  Keeping me safely away untouched like a princess in his castle.  Or maybe he was just George, software developer of almost unlimited bandwidth, taking on one more assignment.

Towards the latter half of 2012, his body started to fail.  He couldn’t walk anymore, moving from a cane, to a walker and finally to a wheelchair.  By December 2013, he could no longer manipulate the wheels of the chair on his own.

George was in denial about his condition.  He swore to me that he was getting better even as he became emaciated, the bones showing through the flesh in his back.   I showed him pictures of his wounds on my cell phone, but he still insisted he was fine.

The Sunday of April 7th he was obviously addled, rambling and disoriented.  As he begged me not to call, I dialed 911 to take him to the hospital.

He died in the hospital three days later on April 10, 2013.  He was 53. He’d continued to work up until four days before his death and lasted way longer than his doctors had predicted.

My last words to him were agreeing that he’d come home after he got better.   My next to last words were, “What’s your fucking Wells Fargo password?”

We were together for 32 years. He was my life.