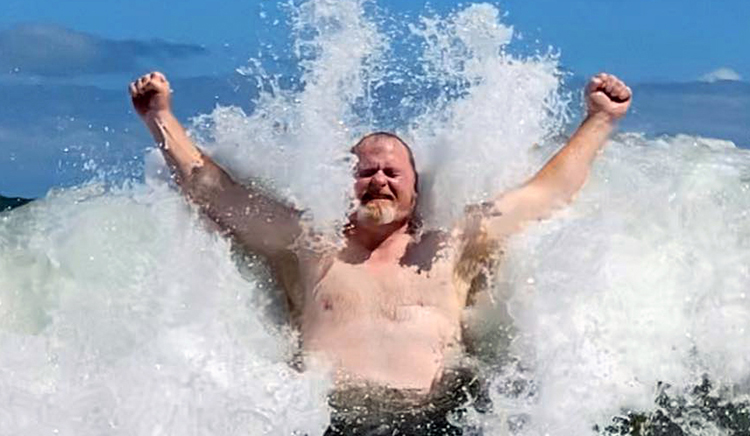 Gary Fields made a living as a law enforcement officer, but it wasn’t criminals he had to fight for his life.

Since 2005, Gary has squared off against cancer in a bid to defeat the formidable foe that attacked the Pearisburg, Va., man and his family in an unlikely way.

“I had a left nipple that was sore and tender,” Gary said this week, explaining that his symptoms were similar to those he might have experienced right after running long distances during training at the Virginia State Police Academy training back in the day, or after a long day bailing hay.

At the time, the thought he might have breast cancer hadn’t occurred to him. He made an appointment with his family physician, who wrote a prescription for a week’s worth of an antibiotic.

When that failed to clear up the problem, the physician ordered a mammogram, but since he had little breast tissue to record on the image, it didn’t show anything of concern. Next up, doctors tried an ultrasound, which did reveal a troublesome bit of tissue — just enough to call for a biopsy.

Ultimately, Gary recalled the surgeon returning to his office after the biopsy, where he and his wife, Michelle, sat.

“The doctor came in and said, ‘Sure enough, it was malignant.’ And very quickly, nonchalantly, he said, ‘It was in the ducts; it hasn’t broken out.’ He said, ‘We’ll get it out, and you’ll be fine,’” Fields said. “It was one of those fist-in-the-gut moments, and he didn’t let us ask questions or anything before he was running out to schedule surgery. He was just gone.”

Before the Fields family knew what was happening, Gary was having his first surgery.

“We were just sitting there, thinking, ‘What in the world just happened?’” Gary recalled this week.

After the initial surgery, however, Fields’ oncologist worried there may still have been some cancer cells inside the ducts attached to Gary’s nipple, which had been where his initial symptoms presented. So, he recommended a second surgery to perform a complete mastectomy. That surgery went well.

“We thought everything was good until it was late 2007,” Gary said.

Then, while showering one day, he felt a new lump in his chest, and Michelle encouraged him to see his oncologist just for precaution.

When physicians came back with the results, Gary knew what they had to tell him before they shared.

The “lump” turned out to be a cancerous tumor that required even more surgery, this time, removing even more tissue from the breast area, and 14 lymph nodes from the armpit.

Out of the 14 nodes, only one was cancerous, but Gary and Michelle suffered more personal tragedy in the midst of his surgeries. His brother, Randy, came to the hospital to check on him after his surgery. An over-the-road, big-rig driver, Randy had to leave on a trip to California before Gary woke fully from surgery.

“I was trying really hard to wake up, but I heard Randy say that he had to leave but he’d be back as soon as he could,” Gary said. “But, while he was gone, I ended up getting discharged from the hospital.”

A day or two later, at home, Gary got a call that his brother had crashed his rig and died in the crash.

Between surgeries and on the same day as their anniversary, Michelle and Gary ended up attending his brother’s funeral.

As soon as he said goodbye to his brother, Gary returned to fighting for his own life. Armed with the knowledge that one of his nodes was cancerous, Gary started chemotherapy, which poisoned his system in a bid to kill the cancer cells.

Doctors gave him a choice of starting immediately or waiting until after Christmas, but he and Michelle opted to go aggressive and begin on Dec. 15, hoping the worst effects would pass by Christmas. They didn’t.

“I was like a zombie that Christmas,” he said. “All I felt like doing was getting up and going to the chair so the kids could have Christmas.”

Every 21 days, he took a new treatment until sometime in March. It was a difficult time. But Gary laughed at one of the times that makes many people cry.

He was still working as a police officer during much of his treatment. The day he discovered his hair was beginning to fall out, he was undergoing a training exercise with his nephew. He reached up and pulled out a “chunk” of hair and showed it to his nephew. His nephew’s eyes got big, and he reached over and did the same thing. They exchanged horrified looks and burst into laughter.

“It took it from stress and horror to hilarious,” Gary said, laughing at the memory.

After the chemo, his oncologist put him on a regimen of Tamoxifen to block the hormones that feed cancer.

“I was to take it for five years, which I did,” Gary said. “I had no other incidents, continued to see my oncologist every six months, and everything was good.”

Then, the father of four and grandfather of three got punched in the gut again. He started having some pain in his lower abdomen and asked his family physician about it. He thought he might be experiencing a recurrence of diverticulitis he’d experienced a few years ago.

Given his medical history, the doctor recommended a CT scan.

The scan showed an inactive kidney stone and some troubling lymph node activity, so a PET scan was scheduled.

“That’s when it really lit up,” Gary said.

That scan showcased cancer activity in his sternum, lymph nodes behind his sternum and in his chest wall.

His oncologist suspected his breast cancer had returned, but in order to know for sure, something had to be biopsied. That test confirmed the breast cancer had spread to other areas of his body, rather than new bone cancer emerging.

This time, the breast cancer many people don’t know can strike in men had spread to other areas in his body and was now Stage IV. At this point, it cannot be cured. Gary will fight it the rest of his life.

His familiar oncologist recommended he go back on the regimen of Tamoxifen.

He said, “It worked before, there’s no reason to think it wouldn’t work again. The way you know it’s stopped working is that it spreads somewhere else. I thought about that, and I thought, ‘That’s reactive, not proactive.’”

The more that weighed on his mind, the more Gary wanted a second opinion.

He suggested three different medications and a monthly shot. One of those medications is a newer pill than Tamoxifen, and he estimated that Gary only had a life expectancy of two to three years, even with that plan of attack.

Gary recalled the conversation in which he asked his hometown oncologist the same question.

“My other oncologist, I had asked several times, and he didn’t want to answer,” he said. “I asked him point-blank, I said, ‘Doctor, I have grandkids real young that I would like to remember me, how long can I live with this?’ He said, ‘Oh, it’s not a matter of will they remember you. It’s a matter of will you see them graduate high school?’ My oldest one is 5, so basically, he’s saying 13 years, maybe.”

So, Gary left Atlanta with the paperwork and the options the younger oncologist offered, with two very different recommendations on how to fight the same disease.

Monday, got a call from his long-term oncologist saying he strongly disagreed with Atlanta doctor’s recommendation of the aggressive treatment, because one of the new doctor’s recommendations has allegedly not been approved for male patients and may even speed up cancer because it might even feed the disease.

In the meantime, Michelle, who works four 12-hour night shifts as a corrections officer before having four days off, has been weathering each storm at Gary’s side, no matter how strong the wind, and she has never wavered in her faith by his side.

The community, also, has stepped up to support. Just Sunday, he said classmates organized a hotdog dinner to raise funds for travel and treatment expenses, during which Giles County Commonwealth Attorney Robert Lilly donated his time to entertain children with magic tricks and balloon animals, and an auctioneer also donated time during an auction.

So many classmates meandered in and out during the day that there were two class photos taken, and the total effect was “emotionally draining but pleasant,” Gary said, summing it up with overwhelming.

Organizers said there were 1,200 hotdogs prepared and “not very many” buns left over, so Gary said he bet there were more than 1,000 dinners sold that day.

At this point, he doesn’t know which way he’ll go with treatment, but he pledged not to change his treatment until he meets with his familiar oncologist sometime in November. He only knows one thing for sure: he wants to live as much in whatever time he has left as possible.

“Spending time with her [Michelle] and my grandkids. That’s pretty much what I do, and I do want them to remember me,” he said. “I’ve either got them MAYBE remembering me, or having me there when they graduate, whichever one you believe. I don’t know what to do.”

He also wants all men to understand that just because they don’t have breasts, they can still get breast cancer. He is living proof of that fact.

“To this day, I don’t know if that sore nipple had anything to do with cancer, but men who have any kind of unusual symptom should have it checked out,” he said. “If I hadn’t I might not have had as long as I have so far.” 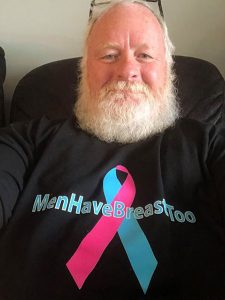 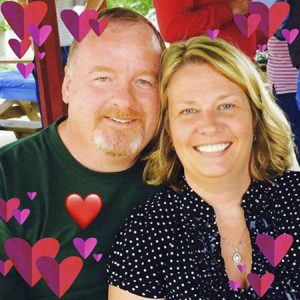 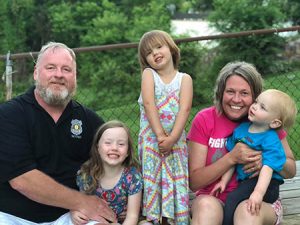 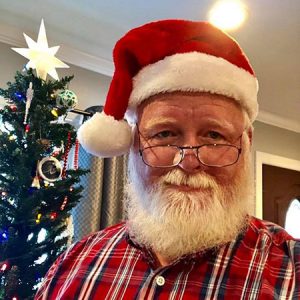 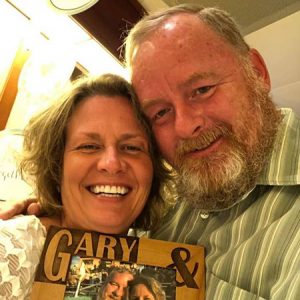 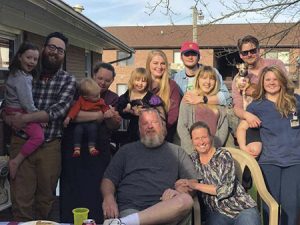