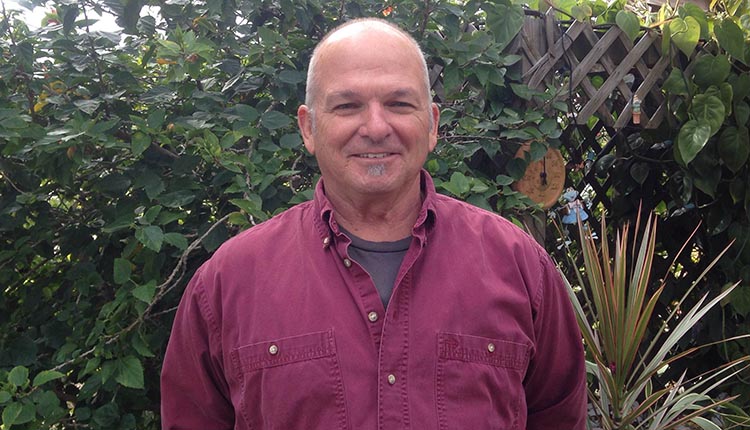 Although diagnosed with breast cancer in April 2007 at age 55, I’ve been very fortunate.

When my future wife Teresa noticed the lump in my left breast, I was afraid it might be breast cancer due to my family history. Still, it’s hard to be completely prepared when one gets the news. I knew men could get breast cancer, but never thought much about it even though it claimed my maternal grandmother, my mom, and her sister. I was always concerned for my sister, but never for myself.

Even though male breast cancer is rare relative to female breast cancer, the chances are still around 1%, which surprised me. My understanding is the number one symptom in men, after actually discovering a lump, is an inverted nipple, which I’d had for some time.

I was a bit concerned with what the result would be when I had a mastectomy that May.  Fortunately, the Lord was watching out for me and there were no signs of cancer in my lymph nodes. Consequently, I was not a candidate for radiation treatment and the potential side effects of chemotherapy, in my opinion, were not worth the additional small reduction in chances of recurrence vs. the long-term hormonal treatment option. So, Tamoxifen it was for five years. One of the side effects of the estrogen blocker is hot flashes and I have a funny story about that.

Soon after beginning my five-year regimen, I was working at my desk as a property appraiser when all of a sudden a strange feeling came over me then went away. I thought, “That’s weird,” and went back to work. Then it happened again and I realized what it was. I chuckled and announced to a room full of female coworkers, “I believe I’ve just had my first hot flash.” Their good-natured response, “Welcome to our world.”

Eight and a half years later and so far so good. I’ve been moved to Moffitt Cancer Center’s “Survivor Program” and am down to just annual check-ups. The folks at Moffitt in Tampa, Florida, are outstanding, but it was interesting when men were all of a sudden “banned” from the Women’s Breast Cancer Clinic for a while. I never could find out why and my lead physician, a woman, did not know either. She wasn’t happy about it. Whatever the issue, it no longer exists, but the incident illustrates the need for male breast cancer awareness. So “Thank You” to the Male Breast Cancer Coalition!

Finally, I have five “blood” siblings, four brothers and one sister, plus a daughter and two sons. Recommendations were that my daughter should be tested and she was negative, as for my sons they were told they should start colonoscopies before the age of 40. In a recent development, turns out my youngest son, age 37, also has the BRCA 2 mutation. He went for his first colonoscopy 6 years ago because of my experience and after annual procedures due to polyps, decided to get tested. Thankfully, they’ve never been cancerous. Since then I’ve spoken to my other son about getting tested anyway, even though his colonoscopy was normal, and am going to place another call to him right now.

My siblings were encouraged to undergo genetic testing because of my diagnosis. Out of all of us, only myself and two brothers tested positive for the BRCA 2 mutation, and that’s an interesting story in itself. My youngest brother, in his early 40’s at the time, mentioned he was BRCA positive to a physician friend who encouraged him to have a colonoscopy performed. Turns out my brother had colon cancer with absolutely no symptoms.  So, I’m glad I got breast cancer.  It saved my brother’s life.