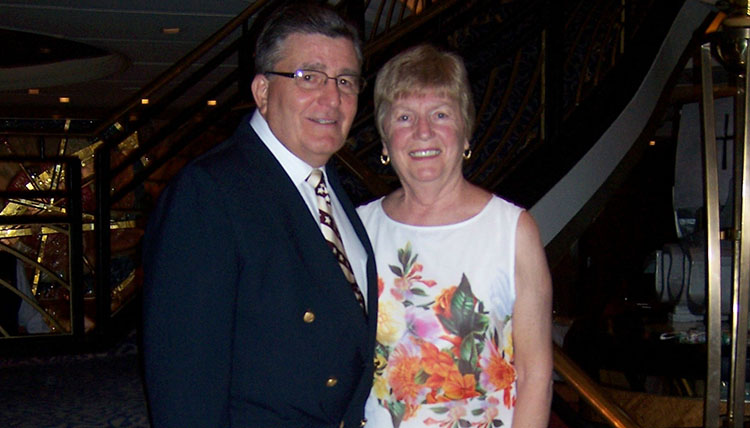 My wife got me when I was young and innocent. We were 19, at a dance, she loved to jitter bug and so did I. A year later we were married.  Now we have three kids, 10 grandkids and a lot of life.

For more than 29 years I went for company physicals each year on my birthday, thanks to my employer Proctor & Gamble one of the best companies you can work for. Believe it or not, some people didn’t take advantage of this opportunity. Even when I retired, I continued going for yearly physicals.

Two weeks after returning from a vacation with my wife in 2002, I had an appointment for my annual physical. Coincidentally, when we were on our cruise I found a hard lump under my right breast while jumping around in the pool playing water volleyball.  At the time, my primary care doctor was a woman.  When she put her hand on my lump, she immediately told me I needed to get to a surgeon. I could tell by the look on her face she knew something wasn’t right.

The tumor was growing fast, it was aggressive and it had to come out. My mastectomy was followed by chemo.

My mom died at 69-years-old just one year after her breast cancer diagnosis. I was never concerned about getting breast cancer myself, because I always thought it was a female problem. Who would have ever thought….?

Because of my family history with breast cancer, my sister and I did genetic testing for the BRCA mutation.  We were both negative.  I’m still convinced my breast cancer was caused by environmental factors. Perhaps from being exposed to a lot of chemicals at the plant where I worked making Pampers?  The chemicals were in the cleaning solvents used when rebuilding the drive components on the production lines. I was a line mechanic for 15 years then a production coordinator. The cause of my breast cancer has always befuddled me.

When I was initially diagnosed with breast cancer, there was very little information out there.  Now 13 years later there is much more, but most people still don’t know men can get breast cancer. Since breast cancer isn’t a big killer of men, there doesn’t seem to be much concern for us.

I’m 73 now, still go for yearly check ups and blood tests. You would think I’d be going for regular mammograms too. My doctors say it’s not necessary and my insurance will only cover my mammogram if the doctor prescribes one, otherwise I’d have to pay for the test myself (yes, because I am a man).

To raise awareness, I’ve been walking in the Race For The Cure every year since my diagnosis.  In fact, the first year I walked was only a couple of days after my last chemo treatment. My family has done the race with me each of the last 13 years and I am very proud of all of them.

My wife and I are still jitterbugging, but just at a slower pace. We enjoy going dancing regularly on Saturday nights.  It was love at first sight and we’ve been dancing together for 53 years.

Fiore, wife, and his girls